GADGETS AND GIZMOS TO CLUTTER A KITCHEN 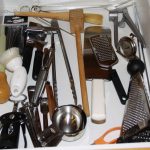 You know that drawer in your kitchen that’s so stuffed with stuff that you have trouble opening it? The one where you have jammed in all manner of gadgets and gizmos through the years. The one you have to reach into and start to empty things onto the counter to get enough clearance to open it so you can dig through the mess to find whatever it is you think you may have put in there. The one with five identical wine bottle openers, assorted measuring cups, a hammer and screw driver, a roll of scotch tape, a tape measure, four vegetable peelers you never can find, a ruler …

I have a solution for your dilemma.

We had a drawer like that until we remodeled our kitchen a couple of years ago. Actually, it was more a transplant than a remodel. We ripped the whole thing out – wall to wall, floor to ceiling – and had a whole new kitchen built in its place. We even eliminated the wall between the kitchen and dining room. And we had the good sense to have seven of those shallow drawers installed so we could spread our gadgets and gizmos around the room.

Let’s assume a total kitchen transplant isn’t in your deck of cards. Don’t fear. There’s a different lesson to be learned from what we did.

Start by opening that overstuffed drawer and taking everything out. Spread those gadgets and gizmos on the counter or a table. Pick up each item and ask yourself if you’ve used it in the last six months. If the answer is “no” put it in a pile to be donated to some local charity thrift shop, or thrown away. If it’s something that has nothing to do with food or cooking, find someplace else to store it.

Once you’ve narrowed the collection to only those things you’ve used in the last half year, go through them one more time. This time you’re looking for things that don’t do anything that can’t be done by some other device. Get rid of them. And thin out the supply of duplicated devices.

That should get you where you want to be. It took you years of impulse buying and receiving gifts to accumulate this drawer full of stuff. You never would have bought all these things had you gone out shopping one afternoon. So, be merciless. Don’t think of the one time you used that basting tube five years ago. Don’t remember the old friend who gave you those lacquered chop sticks.

Seven drawers for gadgets and gizmos in our new kitchen may seem excessive. We didn’t start out with that in mind. It was mostly the product of kitchen design. But we are glad it turned out that way. Three of the drawers are under the stovetop and the counters on each side. The other four are divided two and two on either side of the sink. The center one under the stovetop holds my pot holders and the cast iron stovetop grill. How convenient. To the right are the measuring cups, tongs, micro grater, box grater, garlic press, pasta fork, and a couple of spatulas.

I won’t take you on a tour through the rest of the drawers but I think you get the idea – no drawer is overcrowded and each contains what is most likely to be needed at the nearest work station.

Now, for the real challenge – having achieved order, how to maintain it. The answer: never buy anything in a kitchen store that you didn’t know you wanted before you got there. Don’t browse or search for whatever it is you came to buy. Ask the first clerk you see where your item is, put on blinders and go get it.

I don’t let myself be distracted by that melon slicer with the “serrated blade that glides through melon” at Bed Bath & Beyond? Why would I want something in my kitchen that has only one purpose – slicing melon – when I’ve been doing the same thing with a knife all my life?

Do I need a foil cutter, plastic lettuce knife, avocado slicer, or corn cutter to clutter my kitchen drawers? I’ve managed fine performing each of those tasks for decades with ordinary kitchen knives. Besides, lettuce should be torn, not cut. Unless it’s a wedge of ice berg, in which case it should be fed to the rabbits.

Wanna guess how many hamburger patties I’ve made over the years without ever owning a patty maker? How much pasta I’ve cooked without ever having a pasta measurer?

If I had that plastic thing to chop and toss salad greens simultaneously, would I ever use it? I’ve been sealing food stuff in plastic wrap and plastic bags since they came on the market. Why would I need a “heat sealing food saver” to sit on my counter, even if it does have a built in plastic bag opener? Isn’t that why they make scissors?

I know I’ve gone a little afield from the subject of overstuffed drawers. But while where at it let’s consider the fresh herb mill. No thanks. I’ve been tearing and chopping fresh herbs without one and where would I keep the mill between uses.

I have a top-of-the-line immersion blender. I use it five or six times a year for making soups and sauces. To borrow a phrase from the movies, you would have to pry it from by cold dead hands to get it away from me. I didn’t buy it; it was a gift from my son Lloyd and daughter-in-law Edie. It has all but replaced my old hand cranked folly grill, which I keep for mashing potatoes and nostalgia. Between uses, the immersion blender is kept in a cupboard above the refrigerator, along with my universal hand meat grinder, my electric hand mixer, and my spiffy bamboo salad bowl.

With the best of intentions, Lloyd and Edie also bought me a slow cooker. With their permission, I returned it. I have a nice Dutch oven upon which I rely for slow cooking. I have friends with young children. With both parents working, their slow cooker is invaluable. For me, I probably never would use it. But, then, we don’t have a microwave or a toaster oven either.

Anyway, let’s get back to the gadgets and gizmos that can fill up drawers and crowd you out of the kitchen. Note pad in hand, I browsed through my local William Sonoma and found a potato roaster rack; an apple peeler and corer; a “sleek scraper” to scrape things from the cutting board into the pot or pan; a tomato corer; a tomato peeler; a 4 in 1 tool for pitting, mashing, scooping and slicing avocados, an avocado cuber; a set of ravioli stampers; five different cheese graters …

On my worst day I wouldn’t buy any of those things for myself or as a gift for someone else. Collectively, they raise an interesting question: why have one device to perform many tasks when you could have 10 devices to do the same thing?

So, there are your choices. It’s either discipline and diligence, or call your contractor and install a new kitchen with seven drawers for the gadgets and gizmos.