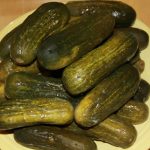 There are things that join the generations in a continuum that gives meaning to existence, things that are handed down from grandparents to parents and on to offspring and grandchildren. They are the things that tell us we come from someplace and there will be something coming after us.

One of those things is food in all its glorious manifestations.

Tastes are developed at the family dining table during holiday dinners that bring relatives together across the miles. Recipes are handed on for dinners shared at the end of the work and school day. Meals are enjoyed with fond recollections of eating that same thing with an aunt or uncle, of having that same dish prepared by a cousin or parent.

This story began more than 100 years ago in Romania and had its most recent telling at Philippe, the French dip sandwich place in downtown Los Angeles.

In late June my nephew Bryan and I took his two sons, Justin, 12, and Nathan, 7, to their first ever baseball game at Dodger Stadium. We stopped at Philippe for dinner before the game. The two kids ordered dipped roast beef sandwiches. Justin spotted the kosher pickles in the case and said he would like one. After just one bite he proclaimed it the best pickle he ever had tasted.

Justin couldn’t have known it at the time, but he had issued a challenge.

Tucked away in a kitchen cabinet at our house there’s a box with my mother’s recipe for kosher dill pickles. It’s the same recipe her mother brought with her from Romania, when she came to the U.S. some 125 years ago, although I doubt the recipe was written down for the trip to the new world. How long the recipe had been in the family before that is anyone’s guess.

Mom made kosher dill pickles at our home in Brooklyn and in Los Angeles. Dad loved them as an accent with a juicy, broiled chuck steak or as a side with the hard salami sandwiches he would take to work for lunch. From him I learned to appreciate those same tastes.

I used to make pickles by the gallon using that same recipe several times a year when our sons were young. I passed along dad’s affinity for pickles with salami sandwiches or steak. If anyone had a sore throat it was time to drink some of the pickling juice. Bryan also learned to eat those pickles when he would visit us for dinner.

When the “boys” moved out and started life on their own, it no longer made sense to be making all those pickles. Jennifer doesn’t eat them, so I would have been on my own. Then came my quadruple coronary bypass surgery and the order to knock of the sodium in my diet.

I gave the old recipe to my oldest son, Lloyd, and he has put up a batch of pickles a few times using a pickling jar I gave to him.

It probably had been at least 20 years, maybe 25 years since I made a batch of kosher dills when Justin rekindled the fire. I knew I would be heading down San Diego way in a couple of weeks and would be seeing him. So, I hauled the old gallon jar in from the garage, washed and sterilized it and put up a batch of cucumbers to pickle.

This simple recipe is far easier than the more traditional ones you’ll find on line or in cookbooks, some of which require weeks of  pickling before they’re ready to eat.

When I give Justin his jar of pickles, I’ll also give him the recipe. That will make it five generations we can trace – from my grandmother, to my mother, to me, to Lloyd and Bryan and now to Justin.

KOSHER DILL PICKLES
4 lbs unwaxed pickling cucumbers (3 to 4-inches long)
½ cup kosher salt
1 head garlic (halved)
1 tsp whole black peppers
½ tsp crushed red pepper
¼ package fresh dill
cool water
Scrub cucumbers to remove all sand and grit. Trim any stems from the ends of the cucumbers. Stand cucumbers thick end down in a 1-gallon glass jar. (You should get three layers of pickles. If there are any extras, lay them on top.)
Pour the salt over the cucumbers. Break apart the halved garlic cloves and drop them into the jar. (Don’t worry if some of the paper gets into the jar.)
Drop the black peppers and red pepper into the jar.
Push dill stalks into the jar between the cucumbers. Fill the jar with cold tap water to cover cucumbers.
Rotate the jar sharply to distribute salt and other ingredients. Put a glass in the mouth of the jar to keep the cucumbers from floating out of the liquid. If needed put some water in the glass to give it weight.
Drape a lightweight cloth over the top of the jar to cover the mouth. Place the jar on a counter and let stand at room temperature 4 to 6 days, or until cucumbers take on the dark green color of dill pickles. If the house is being kept unusually cook by air conditioning the pickling process probably will take closer to 6 days than 4 days.
After the second day, rotate the jar back and forth sharply once again to redistribute water and other ingredients. Repeat this step each day.
When the pickles are done, remove them from the jar. Pour the liquid through a strainer to remove solids. Put the pickles into smaller jars, pour in the strained pickling liquid, cover jars and refrigerate to stop the pickling process.