RADIATION IN THE FOOD SUPPLY / how many “harmless” little doses does it take to make a big, harmful dose 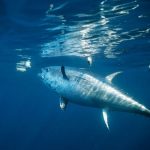 Don’t worry. The amount of cesium in that radioactive Pacific blue fin tuna caught off the coast of Southern California is no more than what you would get from the potassium in a banana.

That was supposed to reassure us about our next visit to a sushi bar. The statement came after it was revealed that 15 Pacific blue fin tuna were tested in August 2011 and all 15 had cesium levels 10 times greater than that in fish caught the year before and the source of these higher levels was radiation released into the water off the coast of Japan from the Fukushima nuclear power plant disaster.

But what if I had a banana in my oatmeal that morning? Doesn’t that get added to the cesium I might be ingesting at the sushi bar? And if I had an x-ray that day, or flew across country, or played golf or took a walk in the sun, or ate some other kind of fish in which the radiation has not yet been detected … Cesium has a half-life of 30 years. So what about yesterday’s tuna?

Decades ago, at a national conference in Las Vegas, the nuclear energy industry and its apologists in government regulatory agencies were advised by public relations consultants to adopt a policy of minimizing everything that goes wrong at a power plant.

Radiation leaks at the San Onofre Nuclear Plant in San Diego County early this year? First deny it happened, then say it was confined to the plant site and there was no danger to the public. There never is a danger to the public, not even after Three Mile Island.

Tons of highly radioactive spent fuel rods hanging around at the sites of plants all across the country because there’s no place to dispose of them? No problem. They’re working on a solution and should have one soon. They’ve been saying that for 70 years and are no closer to a solution now than they were then.

Previously undiscovered earthquake fault within a mile of the Diablo Canyon Nuclear plant in San Luis Obispo County? No big deal. They designed the plant to withstand a quake on that fault – even though they didn’t know it was there.

And on and on it goes. Never admit there’s a problem. Let ‘em eat radioactive blue fin tuna. If they get cancer years later it can’t be traced to any specific source.

We knew there was a danger last summer when migrating Pacific albacore tuna began arriving in the Pacific Northwest after having left the coast of Japan shortly after Fukushima dumped millions of gallons of radioactive water into the ocean. Those fish were caught in U.S. waters. As domestic catch they were subject to far less stringent testing, even though they came to us from the waters of Japan.

We knew there was a danger when researchers revealed they had found increased levels of radiation in the kelp off the coast of Orange County. Don’t worry, we were assured, no radiation had been found in the fish and sea life that feed on that kelp. What they didn’t say was there hadn’t been any testing of that fish and sea life. Researchers were seeking funding to conduct those tests.

Now this. Add Pacific blue fin tuna to Japanese sea urchin, Japanese mackerel and other fish that are caught in Japanese waters or migrate to the U.S. from Japan. And then there’s the stuff that’s caught in Hawaiian waters that never makes it to the mainland.

Two weeks after Fukushima, this online food magazine published an article titled “Will Your Sushi Glow in the Dark?” How prophetic was that? You can find it by clicking on Articles in the menu at the right side of the home page.

For the past year I’ve made sure the uni (sea urchin) I eat comes from Santa Barbara, not Japan. I avoided the Pacific albacore that migrated from Japan last summer. Now I have to make sure the blue fin tuna is from the Atlantic, not the Pacific.

Do I trust the sushi chef’s to be truthful? By and large yes because I’m not eating in marginal places. I stick to places I know and where I’m known. They know I’m going to eat my fill of sushi, whether or not I order the toro.

Yet I have this feeling the day will come when I turn in my chop sticks – when Fukushima radiation will infect the sea urchin beds off Santa Barbara and they tell us it’s only a minor amount of radiation – no more than what you get in a banana, or a cross country airline flight, or an x-ray. Anything to minimize the risk. But what do we do when Fukushima radiation has so thoroughly spread throughout the Pacific as to be found in every fish caught in that ocean. If the revelation regarding the Pacific blue fin is any indication we may already be there.

NOTE: The photo at the top of this article is an Atlantic Blue Fin Tuna.  – See more at: https://www.tabletalkatlarrys.com/index.php/2012/06/radiation-in-the-food-supply-how-many-harmless-little-doses-does-it-take