IS THERE AN AG WATER SHORTAGE, OR ARE THOSE ROADSIDE SIGNS ALL WET? 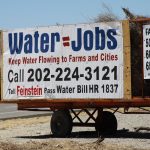 By Larry Levine –
California agriculture seems to have a serious problem. Given the evidence witnessed during a recent drive through the state’s Central Valley on Interstate 5, it would seem to be a potentially fatal problem.

Many of the signs read: “Stop the Congress Created Dust Bowl”

A few read: “Stop the Democrat Created Dust Bowl” with the same accompanying three names in a circle with a line through them.

Some plead: “Tell Feinstein (U.S. Senator Dianne) to Vote for the Water Bill”.

Notice a pattern? All the named elected officials are Democrats and the only political party named is the Democrat (sic) party.

No one can deny water is a serious issue in ag country. We get that. But year after year the valley’s farmers produce more than they did the year before. Yields per acre increase for many crops. Valley farmers lead the nation and the world in the production of scores of different crops. Part of that is the result of more sophisticated farm management and more efficient use of water. But: dust bowl?

Next, consider most of the Central Valley has been represented in Congress by Republicans for decades and Republicans have been the majority party in the House of Representatives in 13 of the last 17 years. So, why are fingers pointing only at Democratic elected officials? Why haven’t the Central Valley farmers turned to their own Republican representatives with their problems? Are those Republican legislators unresponsive or ineffective, or is there something else going on here?

Some of the roadside signs stand beside fields that are brown and plowed under. Many, however, border lush green acres of tomatoes, corn, apple trees, walnut trees, and almond trees.

The other day we drove by an area of about one thousand acres – rolling hills that we never had seen planted before in all our many years of traveling the I-5. This time it was freshly planted with nut trees and grape vines – new acreage put into production. The field was bookended by two of the water shortage signs. Further on we saw a sign in front of a huge field of newly planted corn. Credibility gap?

So how wise is this sign war? If one has a political problem the best way to handle it certainly is not to plaster the names of those with whom you wish to deal on signs proclaiming them to be the enemy. The signs to which I refer have been present in the valley for many years. But they seem to have proliferated greatly this summer. If the issue at hand has not been dealt with successfully by posting signs like these through the years, why would the ag community think they will work now?

Or is that not their real motive? Might it be just part of the bitter partisan political wars that divide our nation? Are they trying to resolve legitimate water issues, or just win the next election?

I will take a back seat to no one when it comes to support for and appreciation of the role of agriculture in California. Those who have read some of my earlier writings on the subject know I find great inspiration just driving through the Central Valley. This Brooklyn transplant can speed through at 80 miles an hour and name the crops on both sides of the road. Were I in the state legislature I would strive to be known as agriculture’s best urban friend. But this sign war stuff … it’s just plain silly. And it won’t accomplish a thing.