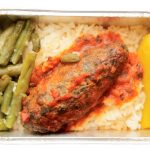 Suppose you went to the most upscale restaurant in your city, one with a couple of Michelin stars on the wall. You order the most expensive, tasty and elaborate meal on the menu. You put it in a plastic box, shrink wrapped it and flash freeze it.

Now take it home and put it in the freezer for 24 hours. Defrost it and heat it in a convection oven. What do you think you would have for dinner that night?

Any chance the medium rare steak you took home from Chez Michelin still would be medium rare by the time you ate it? Could that piece of fish possibly be moist and delicious? Would the chicken breast be anything but dried out?

Of course not. It’s airline food.

Despite recent efforts by some airlines, airline food still ranges between problematic and awful. In the last few years airlines have hired experts to look for scientific reasons why airline food is so bad. They’ve hired celebrity chefs to devise new recipes. And they’ve run test kitchens and invited people to taste and evaluate what they are turning out. All to little or no avail.

Part of the problem is there is a near total disconnect between and among these efforts.

Studies show up to 80% of what we consider taste actually is smell. But before a plane even leaves the ground the humidity in the cabin is dropped to prevent corrosion of the fuselage. Passengers in coach give off body heat that keeps humidity at about 15%. In first class it drops to about 5%. That lowered humidity causes evaporation of the nasal mucus that helps passengers’ odor receptors function. That’s fine if the guy next to you hasn’t bathed, or the baby across the aisle needs a diaper changed, but not so fine when dinner is served.

Humans have some 10,000 taste buds. Studies have found as much as 30% of them cease functioning at high altitude. The longer the flight, the more dehydrated the passengers become and the duller their palates become.

Then there are engine noise, fluorescent lighting, turbulence, reduced oxygen levels and cabin pressure and the stress of traveling, all of which further can diminish taste, scientific studies claim.

Pity the poor food. Even if the airlines were to commit to high quality ingredients, the food wouldn’t stand a chance. That’s what the airlines seem to want us to think when they tout the results of studies that shift the blame from the dinner to the diner. One might think great chefs, if they were armed with all the scientific research, could overcome and adjust their recipes.

“We put a lot of effort in designing perfect meals for our clients, but when we tried them ourselves in the air, the meals would taste like airline food,” Ingo Buelow, who is in charge of food and beverages at Lufthansa, told the New York Times.

Food safety regulations require that meals be cooked on the ground because food cooks slower at high altitude and there would be a risk that dangerous organisms might not be killed at the lower temperatures. Meals prepared to be served hot while aloft have to be heated in convection ovens, which blow hot, dry air over the food. So, the food is reheated, not cooked, even on newer planes with steam ovens.

So, if you are going to pack your own meal to take on board, make sure your sandwich is loaded up on salt, spices and hot sauces. A well-spiced pastrami sandwich on corned rye bread, with a nice mustard and some kosher dill pickles will hold up better than rare roast beef on a Kaiser roll. Just be sure to have the steward bring you plenty of water to offset the effects of all that salt. And if you have hypertension, better think of something else.

Marion Nestle, professor of nutrition food studies and public health at New York University has been quoted widely as saying, “Ice cream is about the only thing I can think of that tastes good on a plane.”

Some airlines are making serious efforts to do better. Air France hired Joel Robuchon of 28 Michelin stars fame to create new meals. He came up with Basque shrimp and turmeric-scented pasta with lemon grass. Fine when cooked and served fresh. But re-heated shrimp is going to be tough and re-heated pasta isn’t going to be al dante.

Delta hired Napa Valley chef Michael Chiarello to come up with new menus for transcontinental business class passengers. Lufthansa offered first and business class passengers the ability to go online and pick their meals from a menu 24 hours before flight time. Korean Airlines bought a farm to raise its own cattle. Emirates bakes its own bread, crumble cake and pecan pie.

The first airline meals were served by United in 1936. In the years since, airplanes have gotten bigger, faster, safer and higher flying. But through all that time, airline executives, suppliers and caterers don’t seem to have learned that food changes in a metal tube at 35,000 feet, even food prepared under optimal conditions and following the exact specifications of some of the best chefs in the world. And food preparation in the tiny, under-equipped airplane galley is anything but optimal.

Chefs aren’t stupid when it comes to food. They know the ambiance of a room can impact the enjoyment of a meal. They know water boils at 212 degrees at sea level and 198 degrees in Denver. They have the benefit of all the scientific studies and 78 years of anecdotal information about bad airline food.

So, why haven’t they figured out the meals they create for airline passengers need to be flavored to pass muster at 35,000 feet, not in a tasting facility at ground level? Don’t try to serve us proteins that will break down, dry out, toughen and lose their flavor when re-heated. Skip the sodium load that puts the health of passengers at risk and get creative with the herbs and spices.