THE CALIFORNIA FOIE GRAS BATTLE / It isn’t a ban, you just can’t get it 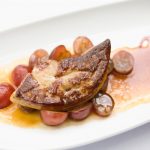 By Larry Levine –
Foie gras in Paris … what a delicious notion.

It had been on my mind all day and it was very much there as the taxi pulled to the curb on the busy Avenue des Champs-Élysées. From a block away the lights of the Arc de Triomphe danced on the pavement as we stepped into the rainy night.

Earlier in the day, as we lunched at a sidewalk café on that same street, images of liberating Allied forces streaming down the avenue and the crowds of free French citizens cheering them brought tears to my eyes. Later, we strolled the avenue and celluloid remembrances of Maurice Chevalier walking jauntily along the sidewalk made me smile.

But now, after dark, my focus was on just one thing – foie gras at a Michelin star restaurant in Paris.

The sign on the building read L’Atelier de Joel Robuchon, but the only door we saw led to a small department store. After poking around in quest of the restaurant entrance, we went into the store and asked one of the clerks. She directed us to the rear, where we found the double glass doors that opened to a broad staircase leading down to a dimly lit reception area.

Visions of a thick slab of fat laden duck liver, seared on the outside and pink and creamy on the inside, danced in my head.

Wrong. I ordered the foie gras and was served pate. It was delicious, but not what I expected. Turns out in France foie gras often means duck liver pate. At least that’s the way it was at every restaurant we visited during our week in Paris.

Once upon a time in the U.S., foie gras meant the seared liver of my dreams. In recent years, however, chefs have ventured into a variety of other preparations, some joyous and delectable, others not so much. In my recommendation of the restaurant Melisse in Santa Monica at www.atlarrys.com I call chef-owner Josiah Citrin a genius when it comes to foie gras. An order of foie gras at Melisse often means a trio of preparations.

Fast forward a few months from Paris in the fall to May 2012. We are at Melisse for a foie gras dinner to raise funds for a challenge to the impending ban on foie gras in California, which is scheduled to go into effect July 1. My 52 years as a political consultant and political reporter tells me the possibility of heading off the ban through the legislature, either by repeal or delay, is non-existent. But I’m here anyway.

Some local animal rights activists notified the press earlier in the day that they would demonstrate outside the restaurant that night. Santa Monica police officers stood by and watched. But only one TV truck showed up and there never were more than 15 demonstrators on the sidewalk. They left soon after the TV crew packed up.

Inside, the restaurant was full throughout the evening. At the next table a couple in their 50s marveled at how they had gotten there from Orange County in just 45 minutes. One table beyond were two young women, maybe in their early 30s. Sisters? Friends? Lovers? Parties of two and four diners, mostly folks who appeared to be over 50, sat relaxed as plate after plate of foie gras offerings from eight chefs were presented along with wine pairings for each course. What had been advertised as a six-course foie gras dinner turned into seven courses plus two items of foie gras amuse bouche and a foie gras macaroon for a finisher. A TV reporter and cameraman roamed between tables and interviewed several diners, mostly younger people and mostly women.

But this article isn’t about the food at one particular dinner, or one particular night. It’s about the ability of self-appointed animal rights zealots to impose their will on others and threaten and bully those who would oppose them. The foie gras ban is not their first California success. Several years ago they convinced voters to ban the sale of horses for slaughter and export as food for human consumption in places like France. That made no more sense to me than would the banning of consumption of beef or lamb. More recently they convinced the California legislature to ban shark fin soup. I have more sympathy for that because the animals were being mutilated for their fins and then discarded. I might feel differently if the whole fish was to be consumed. But the sharks with fins used for soup are not otherwise edible. The rest of the duck, other than the liver, is edible and is served on menus everywhere.

Let me say here that former State Senate President Pro Tempore John Burton, who authored the legislation that bans foie gras, has been a friend of mine for some 42 years. I have great admiration for him and most of what he accomplished as a legislator. In the 42 years I have known him I don’t think we have disagreed on a major issue of public policy more than a handful of times. This is one of those times.

I trust John was motivated by his distaste for what he sincerely believed to be cruel and inhumane treatment of ducks in the process of fattening their livers to produce foie gras.

John’s legislation was passed and signed into law by Governor Arnold Schwarzenegger in 2005. Implementation was delayed for seven years to allow the industry to develop more humane ways to produce the fattened duck livers. Now, time’s up.

The chefs have formed an organization called Coalition for Humane and Ethical Farming Standards – CHEFS. They offered the legislature a proposal that includes a variety of new animal-friendly measures. Among them are provisions that the ducks be raised cage-free and fed by hand.

“We want to create a humane market, not a black market,” said Rob Black, executive director of the Golden Gate Restaurant Association in San Francisco, which has taken the lead in organizing opposition to the ban.

Burton told reporters, “It’s not about foie gras. It’s about inhumane treatment of birds.” In fact that is what his legislation is all about. Assembly Bill 1520 of 2004 doesn’t even mention foie gras. It only addresses the practice of force feeding a bird. The practical effect is to take foie gras off the table because no other bird is force fed. So, if there were some other method of producing foie gras quality duck liver, that would be legal.

The treatment in question involves the placement of a tube in the ducks’ gullets and the pouring of corn directly into the birds’ stomachs. Proponents of the ban say the process, known as gavage, causes physical and emotional damage to the birds. In support of their cause, animal activists show pictures of ducks crammed together in cages and being force fed by machine. No foie gras producer in the U.S. does either of those things.

Foie gras producers and purveyors counter that ducks are constructed is such a way that the process is not painful or stressful. They present their own bevy of veterinary experts to support that position. They relate stories of ducks lining up to be fed and point out that ducks voluntarily gorge themselves before migrating each year.

Bryan Pease, a lawyer and founder of the Animal Protection and Rescue League, told the New York Times, “We want people to know it’s not this weird thing about banning duck liver. It’s the force feeding that’s being targeted.”

That being the case the answer seems apparent: find a different way to fatten the duck livers even if it means livers may not be as large. That’s what proponents of the ban say they want and that’s what the CHEFS are proposing.

There’s reason to question Pease’s ability to bring others in the animal rights community along to his position. Lindsay Rajit of the group PETA (People for the Ethical Treatment of Animals) told the Huffington Post the ideal goal is to promote veganism. At least one of the demonstrators outside Melisse told a TV reporter she doesn’t believe people should eat any kind of meat.

Recently, I phoned several members of the California legislature to ask if they would consider authoring a measure to permit the production and sale of foie gras in California if the product was produced under more humane conditions. I phoned only members I believed might be receptive to the idea. I got a unanimous chorus of “NO”, loud and clear.

Every one of them gave the same reason: they are not willing to risk the wrath of militant elements in the animal rights world. Chefs involved in the move to repeal the ban have reported death threats and harassing phone calls at their homes. Legislators recall that the most violence- prone demonstrations in and around the Capitol often have to do with animal issues.

While it’s the chefs and restaurant owners who are rising up against the ban, the blame for it must fall on the shoulders of those who produce the livers, not those who purchase it to serve in their restaurants. It is the producers who had seven years to figure out a way to deliver foie gras quality duck liver that would meet the requirements of the California law. And they are only now getting around to it.

In the meantime Sonoma Artisan Foie Gras in Northern California, one of the largest producers in the country, is shutting down its operation at some loss of jobs and revenue-generating economic activity for the state and local government. No announcement has been made yet regarding whether they will move to another state.

When the ban goes into effect July 1, California will be the only place in the U.S. that for all practical purposes prohibits restaurants from serving foie gras. Farmers still will be allowed to kill the ducks and market them to restaurants and stores. That’s not considered inhumane. It’s just the fattening of the livers before the ducks are killed that will be banned.

But all is not hopeless for California’s foie gras aficionados. Chicago banned foie gras in 2006. Restaurant owners quickly found ways to skirt the law. One restaurant offered a dish called “chicken liver terrine”. Another served duck liver that reviewers said tasted suspiciously good even though the restaurant owner insisted it came from naturally fed ducks. Enforcement of the ban was all but impossible because officers were at a loss to know if the liver on the plate was from a force fed duck or not and the burden of proof was with the city, not the restaurant owner. Two years later the local restaurant association convinced the city council to repeal the ban by a vote of 36-6.

The Chicago experience may point the direction in which California’s chefs have to travel, not in the willful violation of the law but in tenacity. They may have to wait until foie gras producers can prove they have a more humane way to fatten the livers and then go back to the legislature to redefine what is acceptable. But don’t expect that to happen easily. Animal rights advocates will dig in for a battle to stop any such legislation and it will take courageous legislators to stand up to them.

In the meantime keep your eyes and ears open for more foie gras feasts as the deadline nears. Then be ready to beat a path out of state for your foie gras. A good bet – check the menus at restaurants in Las Vegas while you wait for that day when plump, rich duck liver returns to the menus of California restaurants.