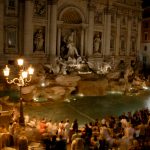 There are two truisms about dining in Italy: 1) all food is regional, and 2) it’s almost impossible to get a bad meal.

In Italy regional can mean city-to-city, or even neighborhood-to-neighborhood. Take tortellini en brodo for instance. I ordered it at a restaurant in Bologna and it was heaven in a bowl – deep, rich, flavorful broth with an ample amount of pillowy stuffed pasta. But in five weeks of driving around Italy we never saw it on a menu anywhere else. And nothing I’ve ever found at a restaurant in the states has come close to matching it.

Then there’s prosciutto crudo di Parma, the king of dry cured ham. It’s everywhere in Parma, but outside of Parma you might not get the crudo grade. I actually found an Italian deli – Domingo’s in Tarzana in the San Fernando Valley – that imports the crudo di Parma. But in Italy, once we left Parma, the prosciutto was hit and miss – always good, but never quite as good.

Then there’s the bad meal proposition. In five weeks – three meals a day – we had one meal that was below par. It was in Montalcino and it was our own fault. We wanted a quick lunch while driving through the Tuscan countryside. We walked away from the crowded restaurant on the corner with people waiting outside. Instead, we went to the empty restaurant right up the street. As seasoned travelers and diners, we knew better. But we ignored our own knowledge. There was a reason people were waiting to get into one place and passing up the place half a block away. But we wanted to get back on the road and didn’t feel like waiting. The menu at the place we stopped was sparse. Jennifer and I each ordered pasta and it was mediocre at best. However, one of the highlights of the trip came when the woman, who was running the place, asked me if I was Italian. That’s how good my restaurant Italian was. We took some Italian language classes before we left home and at this restaurant I spoke nothing but Italian.

We were fortunate in another way. We arrived in Italy armed with a list of restaurant recommendations from David Shaw, the late L.A. Times food writer. It was while we were in Italy in 2005 that I received an email in which David told me he had been diagnosed with a brain tumor. Hardly a month later, he was gone. Along with Johnny Apple, the late New York Times food writer, David was one of the finest I’ve ever read. You can see a review of a collection of Johnny Apple’s writing in the books section of this magazine.

With all this as background, I now will offer some tips that may help you plan some summer travel.

Number one – buy and airplane ticket, book some hotels, rent a car and get ye to Italy. Now that we’ve cleared that hurdle, here are some restaurants you may want to visit. We dined about one third of the time at places David Shaw recommended and about two-thirds of the time at places we discovered, sometimes with the help of a cousin, a hotel clerk, or a taxi driver. So, put some of the following cities are on your itinerary and try these:

The Santa Catarina Hotel in Amalfi is the most romantic hotel I’ve ever seen. It’s in the hills above the city. Every room has a balcony overlooking the ocean and when the lights of Amalfi come on at night the view is straight down on the city and the marina. Ristorante Santa Catarina is the hotel dining room. It’s beautiful, sedate and the food is excellent. So is the live music played softly in the background. We were directed to the Santa Catarina by our friends and atLarrys.com co-host Lenn Grabiner and his wife Kande Hall.

When in Rome, don’t be concerned with what the Roman’s do. You’re a tourist, so do what the tourists do. Go to the famous Fontana de Trevi. Be sure to stand with your back to the fountain and toss a coin over your shoulder into the water to ensure that you will return. Don’t worry about feeling silly or touristy. Do it. You’ll be glad later. Then walk down a block and around the corner to Al Moro an affordable fine dining restaurant. Make sure you have a reservation. There is no sign on this restaurant and it’s on a dark street, so you might walk right by the unassuming door. The crowd inside will be mostly locals. Start with the fried squash blossoms. When you are greeted with buona sera, just answer “sera”, like a local.

Restaurante Cibreo in Firenze is one of the finest restaurants in which you ever will dine. Fish is fresh from the Tuscan sea; produce comes from nearby farms. Fresh local Porcini mushrooms when available; Cheese from local shepherds; Sicilian lemons; Calabrian Clementini tangerines: locally butchered meats: oregano from Pantilleria … it’s all at Cibreo.

In Milano it’s Il Luogo di Aimo e Nadia. Chef-owners Aimo and Nadia Moroni are known by chefs and restaurant owners around the world, who flock to their restaurant. This was David Shaw’s number one recommendation for our visit to Italy. The cooking is innovative and beautifully textured and the room is warm and welcoming. Just call it Aimo e Nadia.

Out of the way in Padava is Le Calandre. We never would have thought to stop here were it not for our cousins Barry and Beverly Wellman, who have friends at the university and had dined at Le Calandre before. We were in route from Venice to Bellagio and made this an overnight stop just so we could eat a Le Calandre. Chef and co-owner Massimiliano Alajmo trained with Aimo Moroni in Milano. The owners of this restaurant also own the butcher shop across the street and the bakery around the corner. They also run the Hotel Maccaroni in the same building as the restaurant. Think Holiday Inn Express when you think about this hotel. But it couldn’t be more convenient to the restaurant; you can drink all the wine you want and not have to drive after.

Lunch at Ristorante Al Veluu in the hills above Tremezzo overlooking Lago Como is the most memorable meal I’ve ever eaten. You can read about it in the My Most Memorable Meal feature at this magazine. You’ll take a ferry across the lake from Bellagio to the town of Tremezzo. From there the restaurant will send a car to drive you up the hill. Weather permitting, eat outdoors and let the view add to the experience.

Trattoria Il Cortile is a charming restaurant in a remote alley of Parma. We never could have known of it expect for the advice of the clerk at our hotel. She made the reservation and gave us directions. We were there on a night when no one else in the room spoke English, save for one young woman who was busing tables. She spoke a very, very few words – not enough to be helpful. Again, my restaurant Italian saved the day.

If you find yourself in any of these cities, try to book a meal at some of these restaurants. But leave plenty of time to explore and find other places on your own. Remember, it really is almost impossible to get a bad meal in Italy. Just pick a place and go on in. Look for the locals; they’re the best restaurant guides you could have.  Or let your hotel clerk or taxi driver suggest something. The odds are overwhelmingly in your favor.