A SUSHI LOVERS’ GUIDE TO SURVIVAL IN TOUGH TIMES 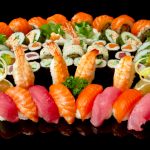 By Larry Levine -It’s been a tough 13 months or so for sushi lovers.

First, the Fukushima nuclear power plant poured radioactive iodine and cesium into the ocean off the coast of Japan. Anything that lived or swam in those waters – things like Japanese uni, saba (Japanese mackerel), and Pacific albacore tuna – became problematic.

Then came an L.A. Times story about a study by Oceana, an ocean and sea life protection organization, that claims large percentages of fish served in restaurants and sold in markets are mislabeled. Tilapia was being sold as red snapper, the study claimed. Samples of supposed yellowtail were found to be amberjack, which I happen to like anyway. Flounder frequently was sold as halibut and sea bream was substituted for sea bass.

It’s not difficult to believe some restaurants and markets may be guilty. Restaurant overhead is high and profit margins are narrow. That some might sell cheap fish at the price of more expensive fish wouldn’t be beyond the realm of possibility.

But something about the data in the study doesn’t feel right. The claim that 87% of the samples of 10 different types of fish at 21 Los Angeles area restaurants were mislabeled feels like a stretch. I have trouble believing 100% of the red snapper samples were something other than red snapper. It might also help to know from which restaurants those samples were taken. Are they high end, high quality restaurants, or smaller ones that are just scraping by.

So, what’s a poor sushiholic to do?

I have my own biases. They may not be fair – most biases aren’t – but they keep me comfortable. I won’t eat sushi in any restaurant that offers two for the price of one. I also stay away from the strip mall type of place in an unlikely location, where the fish may not always be fresh. I never have and never will eat at a sushi restaurant that has pieces of fish running by customers on model train cars.

It’s too bad some perfectly acceptable sushi restaurant owners have to suffer for the transgressions of others, but when it comes to eating raw fish I think discretion is a good watch word. I never would do it outdoors on a hot day at a baseball stadium.

Then there is the matter of recommendations from others. I know people who can’t stay loyal to a sushi restaurant. They tell me of the new terrific place they found and then hop off to another new terrific place as soon as it opens. On the other hand, I have some sushi buddies who I trust completely and have guided me well.

I eat a lot of sushi – probably more than anyone else I know. You’ll find me at a sushi bar anywhere from five to eight times a month. I’ve been known to have sushi for dinner three consecutive nights. There have been times when I’ve had lunch with one friend in a sushi restaurant and dinner with another friend at a different sushi restaurant the same day.

Still, I’m very selective about where I will eat. In the 30 plus years I’ve been eating sushi in L.A. there have been just six or eight restaurants at which I would claim to be a regular. I like to find a sushi chef I can stick with, someone who knows I’ll be back and who is willing to warn me away from a particular fish that may not be as good as it should be on a given night, or introduce me to something new that comes along.

Right now four places are my standbys in L.A. – Asanebo in Studio City, Murakami in Hollywood, Boss Sushi in Beverly Hills and R23 in downtown L.A.  If I lived in some other city I’m sure I would have a different set of dependable spots. You can see recommendations for all of these restaurants at www.atlarrys.com, where you also will find recommendations for excellent sushi restaurants in other cities by some of the site’s co-hosts.

Most of what I know about sushi I learned from Todd Murakami, when he was a chef at Iroha in Studio City in the late 1980s and early 1990s and then through nine years at his own place in West Hollywood. Now he has a small restaurant on Wilcox, right off of Hollywood Blvd. in the heart of Hollywood. It’s just the kind of place I never would think of going into had I not known Todd and the quality of his product for some 25 years.

It was at Iroha under Todd’s tutelage that my sushi horizons matured. I learned to appreciate the different tastes and textures of fish and how to enhance the experience by knowing in what order I preferred to eat my sushi.

My love of sushi still is evolving today. Along with my good friend Amanda, I eat at Boss Sushi several times each month. Sushi chef Koji recently introduced me to marinated salmon toro. That’s the belly of the salmon, just like belly lox in a Jewish deli. And the expert hand of sushi chef Macha at Asanebo has brought me to an appreciation of various types of clams that previously I had avoided. At Asanebo I usually order omakase and let Macha do the rest.

Besides getting to know and trust a particular restaurant and chef, there are other things you can do to protect yourself against mislabeled or less-than-fresh fish at sushi restaurants.

Most obvious, of course, is to get to know your fish. I can look at fish and know the difference between tilapia and red snapper, even though I rarely order the latter because there are other things I find more flavorful. If you pay attention to what is being served and savoir what goes into your mouth so you could identify the taste and texture in a blind test, chances are you won’t be fooled. And if you are suspicious of a place, next time go someplace else.

My personal taste starts every sushi dinner with yellowtail belly. Regular yellowtail is acceptable if the restaurant doesn’t have the belly. Though the texture is similar, the taste of salmon with a strip of sweet kelp is different enough to make that my second selection. Then I like the firmness of octopus, after which it’s back to a softer fish, either albacore or kampachi from Kona in Hawaii if it’s available. Next up probably will be halibut fin, sometimes called halibut edge. It’s crunchy and the more you chew it the more flavor it releases. Some places like to sear the halibut fin. I never allow that.

I think you get the idea by now – alternate textures between soft and firm and mix up the different flavors to your own taste. Any of the clams – orange clam, jumbo clam, etc. – are very firm. Sea bass, black snapper, red snapper and halibut are softer.

At Boss Sushi I always start with yellowtail belly and then go to the Abashiri scallops. Both are soft in texture but they are completely different in taste. Boss Sushi is the only place I order scallops raw. They are that different and that special.

What happens in the middle section of a sushi bar dinner depends on what is available that night and how hungry I am. Once again, it helps to know and be known by the chef, who can guide you to what might be special that night. Some nights I may have a hankering for sweet shrimp – raw shrimp on rice with deep fried shrimp heads. If there’s bonito or ono around I’m going to want it. And on the extremely rare occasion when the restaurant has white king salmon sushi, that’s a must. Boss Sushi is one of the few places at which I actually look forward to sharing a sushi roll somewhere during the meal.

I always close with the same routine: uni particularly if it’s from Santa Barbara, Bluefin tuna toro, and tamargo, sweetened baked egg. Sometimes I stick in an order of fresh water eel after the toro. At Asanebo it might be salt water eel if sushi chef Macha recommends it.

For a bit of sushi trivia fun try these on a friend next time you’re at dinner.

QUESTION 2 – If you Google “types of sushi” how many do you think you would find?

ANSWER 1 – Beijing gets 68.3 million hits. That doesn’t mean there are 68.3 million sushi restaurants in the city, just that many Google hits. San Francisco is second with 16.8 million. Then comes Los Angeles at 12.5 million. Kyoto has 1.01 million and Tokyo is in last place with 230,000, trailing even Long Beach and San Jose CA.

ANSWER 2 – The number is about 110. It’s not precise because of the way Google answers the question. There are fish on the list of which you have never heard and have never eaten and are not likely ever to eat.

It may be difficult to imagine now, when it seems there are more sushi restaurants than traffic signals on some streets, but there was a time when sushi in Los Angeles meant only tuna unless you were at a restaurant in Little Tokyo. That was the case when I first ate sushi in the spring of 1969 at Yamashiro in the hills above Hollywood with our late friend Duane Ruben. Even in San Francisco, where I spent a considerable amount of work time in the early to mid-1970s, I would go to Japanese restaurants and find sushi meant only tuna.

We’ve come a long way since then. Maybe there aren’t 110 varieties of fish available at every sushi restaurant in town, or even at all the restaurants in town combined. But there certainly are enough available varieties to keep any sushi lover satisfied.