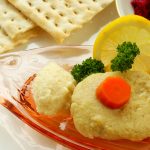 One of my most prized culinary possessions is a recipe for Gefilte Fish in my mother’s own handwriting.

Mom made Gefilte Fish twice a year and served it as an appetizer for the Passover and Rosh Hashanah holiday dinners. A couple of weeks before the holiday, she would phone the fish store in the Fairfax area of Los Angeles, order what she needed and schedule a day to pick it up.

The result was by far and consistently the best Gefilte Fish I’ve ever eaten. Mom has been gone nearly 11 years. But as each holiday season ticks by, I recall fondly how much of herself she invested in this dish and how wonderful it always turne out. So, this year, with Passover just around the corner, I thought I would share some of that.

To go with the fish my father would hand-grate some fresh horseradish root. Mom would add the juice of grated red beets, which seemed to intensify the heat of the horseradish. I’ve seen recipes that call for the addition of sugar, or lemon juice, or even sour cream to the horseradish. Mom added sugar and vinegar.

The recipe I have is written in ink on two 5-inch by 8-inch sheets of note paper. It’s stained from the one time my sister Elisa and I used it to prepare the fish for a big family holiday dinner. We asked mom to write the recipe after she told us she was no longer physically up to making the fish.

Gefilte Fish is from the German “gefullter fisch”, meaning stuffed fish. It’s an Ashkenazi Jewish dish that originally was cooked stuffed in fish skin. That method faded from popularity sometime in the 19th century. Some religiously observant Jews view Gefilte Fish as a traditional food for Shabbat, the Sabbath. Most families restrict their consumption to the holidays and ever-diminishing numbers are ambitious enough to take it on homemade.

Here’s the recipe exactly as mom wrote it for us – spelling errors, abbreviations, lack of punctuation and all. It’s the same recipe her mother brought to the U.S. from Rumania some 130 years ago.

That’s what Elisa and I had to work with. Fortunately we had been around the house often enough while mom was making Gefilte Fish to have picked up enough additional information to fill in the blanks. Here is the same recipe in a form you may find more user friendly.

NORMA LEVINE’S GEFILTE FISH (user friendly translation)
1 medium whole white fish
1 medium whole yellow pike
1 medium whole sucker
1 small whole buffalo
3 inch slice of (shpegal) carp
1 carp head
4 large onions – divided
¼ cup lite olive oil
3 eggs
3 ½ Tblsp koshering salt – divided
4 large carrots – divided
1 ½ teasp pepper – divided
¾ cup seltzer or water club soda
3 cups water
Ask the fish monger to skin and fillet the fish, saving the skins, bones and heads
Put the skins and carp head aside
Put all the bones and other heads in a pot with 3 cups of water along with 1 of the onions quartered, ½ teasp salt and ½ teas pepper
Simmer for 1 ½ hours.
In the meantime heat the oil in a wide fry pan.
Slice 3 onions and cut into half-moons. Stew the onions in the oil until very dark brown but not burned. (see stewing directions below)
Strain the liquid from the bones into a large pot. Discard the bones. Add the skins, carp head and 3 ½ sliced carrots; Cover and bring to a simmer.
Grind the stewed onions and add 1 heaping tablespoon to the pot with the liquid, skins and carp head. Simmer for 1 ½ hours.
Grind all the fish and the rest of the stewed onions
Mix with your hands and grind again.
Grind the remaining ½ carrot and add to the fish along with the eggs, the rest of the salt and the pepper, and ¼ cup of seltzer.
Mix well with your hands. Add ¼ cup seltzer and mix again with your hands.
If your hands come out with no fish sticking to them do not add the remaining seltzer. If fish sticks to your hands add the remaining seltzer and mix again.
Form the ground fish mixture into medium size balls.
Put the fish balls into the pot with the hot liquid. The fish balls should not touch each other.
Simmer 10 minutes.
Shake the pot slowly. Add another layer of fish balls. Cook 10 more minutes. Shake pot slowly again and continue this until all the fish is in the pot.
Simmer ½ hour.
Add 2 ounces of water
Shake the pot gently, cover and simmer. Shake occasionally and continue to simmer until the fish is cooked – about 1 ½ hours
Remove the fish and the carrot slices from the pot. Put them on a platter, cover it with plastic wrap and put it in the refrigerator.
Strain the liquid in which the fish was cooked. Pour it into a jar or serving bowl, cover it and put it in the refrigerator.
Remove the fish from the refrigerator about ½ hour before serving.
Serve with sliced carrots and the jarred fish broth, which will have turned to a jelly.
Serve with a side of prepared horse radish. (recipe follows)

Unfortunately I can’t tell you precisely how many fish balls this will make or how many people it will serve. I can assure you it will be enough for a modest size dinner party of maybe 8 to 10 people.

To stew the onions: sauté the onion slices in the oil until they are well softened and just beginning to brown at the edges. Add about ½ cup of tap water, turn the heat down and cover the pan. Check the onions occasionally to be sure they don’t burn. Add more water as needed and stew until dark brown. This is going to take a fair amount of time.

HORSE RADISH FOR GEFELTE FISH
1 red beet, boiled
2 Tblsp white vinegar
½ teasp sugar
1 Tblsp water
1 piece of horse radish, 4 inches long
Cut the beet into small to medium pieces. Put it in a blender with the vinegar, sugar and water. Grate the beet, but do not liquefy.
Strain the beet and save the juice.
Peel the horse radish. If you are ambitious you may want to grade the horse radish by hand. Then add the beet juice.
Otherwise, chop the horseradish into small pieces. Put it in the blender with the beet juice and grate to a coarse texture.
Careful. This horseradish mixture is going to be very hot. That’s one of the many great reasons to serve all this with a nice, fresh, sliced challah.