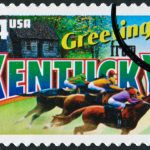 Mornings in a strange town. The limbo between last night’s excess and today’s agenda. Things may perk up. But right now, it’s a newspaper full of other people’s news and a cup of bland coffee.

Unless you are in Louisville, Kentucky. These guys do breakfast. In snappy, upscale restaurants. Dives. Neighborhood haunts. Even a place where the weird go to feel normal.

It’s morning along the Ohio River. The sun is rising on King Louis XVI’s namesake city.  Home of the racetrack. The baseball bat factory. And breakfast.

So. Lose the limbo – all you innocent and righteous souls (and the rest of us.) Five days. Five breakfasts. Join me.

Lynn’s Paradise Café
Yes. Love the art, not the frame. But at Lynn’s, it’s easy to get confused. There’s so much frame. You don’t get featured on Oprah, Bobby Flay and the CBS Evening News for food alone. But when you get past the Ugly Lamp Contest winners, the mannequin leg sprouting from the wall and the neo-retro-décor, there’s a huge breakfast menu. Great pancakes. An ample portion of potatoes covered with cheese and eggs. Cinnamon swirl French toast. All that, while you check out the horse statute with a piece of toast popping out of its back. http://www.lynnsparadisecafe.com/breakfastlunch.html

Wagner’s Pharmacy
It began as a hangout for horsemen in the 1920’s, when Leo Wagner bought an old pharmacy and moved it across the street from Churchill Downs. It’s still there. Still serving the workout jockeys, racing writers and anyone else in the mood for a great old time breakfast. The walls are covered with framed photos of Derby winners. http://wagnerspharmacy.com/

Toast on Market (and Muth’s Candy Store)
Peanut butter pancakes. Lemon soufflé pancakes. Not a bad breakfast in the place. But there is a bonus. Down the block is Muth’s Candy Store. A Louisville original. Family run since World War I. Family recipes. If you are going to Toast, save some room for Muth’s. http://www.toastonmarket.com/breakfast_menu.html. http://www.muthscandy.com/

Wild Eggs
They close at 2:30 in the afternoon (3:00 on weekends) so they better do breakfasts well – and they do. Scrambles and skillets, frittatas and breakfast burritos, waffles and crepes. The owners started with the upscale Napa River Grill in Louisville then applied the winning formula to breakfast. http://www.wildeggs.com/

Between breakfasts, there is plenty to do and see in Louisville. The Muhammad Ali Center (http://www.alicenter.org/Pages/default.aspx), the Louisville Slugger Bat Factory tour (http://www.sluggermuseum.org/visitorguide.aspx), an array of bourbon distillery tours, Churchill Downs, and of course, the grave of Colonel Sanders.

There are also historic old homes, quirky neighborhoods and the University of Louisville. And an abundance of breakfast choices.