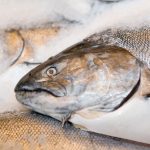 By Larry Levine –
“Tomorrow should be a freakin’ holiday! It’s one of the most important days in my calendar every year! Tomorrow the world’s finest salmon will grace Gemini Fish Market with its first presence of 2012!”

That was the opening paragraph of an email I received recently from Jim Oswalt, owner of Gemini Fish Market in Issaquah Washington, about 20 minutes southeast of downtown Seattle. What, you well may wonder, could cause such glee on the part of a veteran fish monger extraordinaire.They’re called “springers” – the first of the spring season Columbia River Chinooks and they really are in a class by themselves when it comes to salmon. Here’s the rest of what Jim had to say:

“Columbia River Spring Chinook exclusive! I’m guessing we will be one of 2, maybe 3 shops in the greater Seattle area that see a springer tomorrow!

“Season’s not even open yet! They had a test fishery Tuesday that produced a few fish and we were one of the fortunate ones that got a crack at them. At this point, I was only able to procure one fish. If my whining was loud enough, we may see two but I won’t know until morning.

“Those that (sic) have been with Gemini for a while know that these fish are absolutely amazing! They are my favorite salmon of the year! I’d put a piece of springer up against a piece of Copper River or Yukon in a blind taste test and almost guarantee a win in the springer column every time! The fat content in these fish is off the chart and the flavor is out of this world!

“Sounds like the test fishery went well and they may open the river next week so there are more around the corner, but this week’s availability will be quite limited.”

I first tasted a springer a few years ago at the home of my son John and daughter-in-law Julie in Issaquah. Jennifer and I were driving to their home from Seattle-Tacoma Airport, when John called and asked me to swing by Gemini and pick up some fish he had ordered. Dinner that night was grilled springer.

Springer salmon is to super market salmon as filet mignon is to ground beef.

Each year, before the start of the season on the Columbia River, a limited number of permits are issued for a limited catch. Fish are inspected as part of the process of determining when the season will be permitted to open. There may be a total of 30 or 40 fish taken in this test catch and the competition for them among fish stores is spirited. Many of the fishers keep the catch for themselves. Jim usually manages to come up with a couple.

These are three-year-old spring Chinooks that return to the river to spawn a year earlier than their siblings, the four-year-olds that will come along later in the season and make up the vast majority of the Chinooks available in markets.

I received Jim’s email the other night after John already had phoned me to tell me the first springers would be on hand the following day. My first thought: head for the airport. My next thought: Jim said he’d ship me any fish I wanted.

John argued that with a limited amount of springer on hand it wouldn’t be fair of Jim to deprive his regular customers by shipping even a little bit south to L.A. and that Jim might say he couldn’t do it. John advised that I wait a couple of weeks until the season is opened and there will be plenty of springer available. So, that’s what I’m going to do. And then I’ll probably invite a few friends to share in the bounty.

This whole incident reminded me of a conversation I had with John several months earlier. It started when he claimed one day that in a blind tasting he could identify 10 different kinds of salmon. I didn’t know there were 10 different kinds of salmon. I told John I wanted to explore the matter further with an eye toward a possible article for Table Talk.I went on line and couldn’t find 10 kinds of salmon. I emailed Jim at Gemini and he said there are really only five species of salmon – king (Chinook), sockeye, Coho, chum, and pink. In his store, Jim only deals with the first three. There also are steelheads, which tread the line between salmon and trout.

Jim describes king, also known as Chinook, as “highest in fat content, incredibly mild in flavor … the Cadillac of salmons. White kings are the most precious commodity. I believe them to have a higher fat content although you can’t find many biologists who would attest to that.” Only about one out of 100 king salmon is white and science has not determined if the difference stems from genetics or diet.As for sockeye, Jim said, “there are reds and bluebacks. They have the most pronounced flavor and are the second highest in oil content. Sockeye tends to be a more firm fleshed fish.”Coho, sometimes called silver salmon, “is a much leaner and mild flavored fish that needs a lot more attention during cooking.”Keta chum, “sometimes disguised as silver brite salmon, is very lean and good for smoking if you like hard smoke. Kotzebue or Yukon chums have an oil content similar to Coho.” Pink salmon “from a commercial retail/restaurant standpoint is garbage fish … used for canning, etc.”

The problem with trying to prove this is that the seasons don’t completely overlap and it’s virtually impossible to find all of these varieties in the market at the same time. But John lives in the northwest, where each of these fish are plentiful, he loves to eat fish and he has just enough of a curiosity to where I believe he might actually be able to do it. Since John and Julie took up residence in the northwest, I too have become educated in the finer points of salmon. On a scale of 1 to 10, springers are a 20 and white kings are a 15. I’ve never seen a springer on offer in a market or restaurant outside the northwest. I did have white king sushi at Asanebo in Studio City, but I’ve never seen it either in a fish market outside of the northeast.

While there are multiple species of Pacific Northwest and Alaskan salmon, there is only one kind of Atlantic salmon and these days you can pretty much assume it’s farm raise. Ninety-nine percent of Atlantic salmon in the markets are farmed; 80% of Pacific Northwest salmon are wild caught. In the Western Pacific there are cherry salmon in Japan, Korea and Russia. A land-locked subspecies called Taiwanese salmon or Formosan salmon is found in Taiwan. There also is a healthy size salmon fishing industry in New Zealand, the result of fish that were transplanted from California in the 1800s.

For what it’s worth, John also said he would know any farm raised salmon in an instant. Though the lower price may tempt some people, neither John, nor I would buy farm raised salmon for several reasons: 1) It’s artificially colored to change the natural grey flesh to a more appealing pink; 2) there is virtually no healthy omega 3 oil in farm raised salmon; 3) although many fish farms are trying to do a better job, the ocean floor under the fish cages are environmental disasters.

I don’t fish. My role in the fishing industry is in the eating end and I most definitely do love a great piece of fish. As a resident of Los Angeles, that’s not always easy to do. Even at some of the more well known fish markets – not the super market counters – what’s on offer can’t come close to rivaling what is available on a regular basis in the Northwest. Would I move up there to be closer to this bounty? Not a chance, not even to be closer to two of our grandchildren. It rains too frequently, the winter days are too short, the state flower is mold, the top would be up on my car too frequently, and a nice sunny day on the golf course would be limited to just a few weeks in July, August and early summer.

My solutions are two: 1) Fly to Issaquah frequently, purchase fish from Gemini Fish Market and cook it at home as often as possible; or 2) pick my spots and pay the price to have Jim ship some special fish south to me every once in a while.