PORTABLE EDIBLES / do indigenous dishes lose something in transit, or is it us 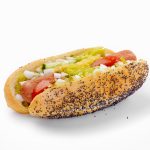 But what happens when you take the Chicago Dog out of Chicago, or the baguette out of Paris, or the Banger out of Britain?

How about the attempt to spread Nathan’s Famous hot dogs across the nation back in the 1980s. Whether or not it worked depends on whether or not you care about the true quality Nathan’s experience. Packaged Nathan’s Famous are available in supermarkets around the world. Try cooking them up at home and they aren’t the same as what you bite into at the original at Coney Island. There are 263 franchised Nathan’s hot dog outlets, but a Nathan’s hot dog turning around on silver colored coils in a K-Mart or gasoline station? Come on. That’s blasphemy. Nathan’s Famous doesn’t even travel well the short distance from Coney Island across the river to Manhattan. It’s partly because of the way they are cooked and partly because you’re not standing at the counter, watching hot dogs come off a 95-year-old grill, with the Boardwalk, the Steeplechase and the Atlantic Ocean as a backdrop. Take the hot dog out of Coney Island and Coney Island goes right out of the hot dog.

While we’re on the subject of hot dogs, let’s consider the revered Chicago Dog – those 100% Vienna beef wonders with the neon green relish and other toppings on a poppy seed bun. I had my first one at Wrigley Field in Chicago last summer. It was so good I went back for a second. About six blocks from my office in Sherman Oaks CA there’s a shop called QT’s Chicago Dogs. I tried one there recently. The owner flies the poppy seed buns and green relish in from Chicago. He’ll steam or grill the same 100% Vienna beef dog I had at Wrigley; onions can be raw or grilled. All the essentials are in place and the dogs were good. But I wasn’t sitting at Wrigley Field, surrounded by 30,000 knowledgeable baseball fans. It wasn’t the same.

Let’s get back to the east coast and deal with Maine lobsters. I’ve been eating lobster since I was a kid growing up in Brooklyn. After we moved to L.A., I continued to feast on Maine lobsters at the Hungry Tiger restaurants, owned by the owners of Flying Tiger freight airline. The airline was flying lobsters from the east coast to a few restaurants in Las Vegas. They saved enough to supply their own L.A. restaurants. I loved ‘em. Then we went on a family vacation to Maine and I learned what fresh Maine lobster, just hours out of the ocean, really tastes like. It was years before I could bring myself to order a lobster anywhere else. I do it now, but it can’t match what we got in Bar Harbor or Kennebunkport.

One more stop on the east coast. The subject is bialys, a shortened down Yiddish word referring to bialystoker kuchen. It’s a small roll that originated in the village of Bialystock Poland and is a tradition of Ashkenazi cuisine. I haven’t been to Poland and the only place outside of New York I have ever been able to find the real thing is at Barney Greengrass restaurant on the top floor of Barney’s of New York department store in Beverly Hills. They fly bialys in from New York daily, unfrozen so they always are fresh. Almost every bagel shop in L.A. offers something called a bialy, but they aren’t even close in taste or texture. Packages of bialys are on the shelves of some super markets. Nope, not the same. In popular lore it’s the water that makes the difference – you need New York water to achieve a real bialy. I’ll buy that until someone comes up with something better.

Let’s jump the Atlantic and land in Italy. If you fly Parma ham from Parma to San Francisco or L.A., why doesn’t it taste the same? Or does it. Is it just that I’m not sitting in some picturesque piazza? There’s wonderful Italian deli near my home. They import Parma ham from Parma, the top grade stuff. They also import a range of other Italian meats – mortadella, sopressatta, cappicola … In Italy these were breakfast every day, along with those wonderful locally grown cantaloupes and tomatoes. But put them on a plane and fly them to Los Angeles and something happens. No matter how many cantaloupes and tomatoes we grow in California, we can’t turn out even one to match those served routinely in Italy. They say the difference is the soil and the water.

While we’re on the continent, let’s consider the baguette. Why aren’t the ones I buy at the best bakeries in L.A. even close to those one gets at any of a hundred or more cafes everyday at breakfast in Paris? Same for croissants.  Then again, why can’t the French, or anyone else in Europe for that matter, seem to figure out how to make a good old American breakfast cup of coffee.

Bangers. Yes, British bangers. Not British style bangers, but the real thing. I eat them occasionally – bangers and mash – at English restaurants in the states and even if they actually do fly them in from England, they aren’t the same. You know why? Because everyone in the place is speaking American, not British.

How about Guinness, the legendary Irish beer? I tried it many times in the U.S. and always thought it was too bitter. My British brother-in-law Bryan and my British nephew Trevor told me it was different in Ireland and I should try it there. First night in Dublin I ordered a half-pint with a bowl of Irish stew. It was smooth, creamy and deeply rewarding. Bring on a full pint. Drank if for two weeks all over Ireland. Came home and tried it again. Same old too bitter stuff.

I visit Seattle often, or rather I visit my son and daughter-in-law and two grandchildren often and they live near Seattle. I can go into restaurants in the northwest at certain times of the year and find as many as 20 different varieties of oysters on the menu. Some of them make their way to restaurants in L.A. I eat them and they are fabulous. In L.A. they are appetizers at dinner. In Seattle they are lunch with crusty bread and a glass of crispy white wine. And over there is Mt. Rainier and across the Sound is the Olympic range.

Sushi and sashimi certainly made the trip from Japan to the U.S. successfully, but a crepe just doesn’t taste the same if you aren’t looking at the Eiffel Tower. Mole is meant to be eaten in Oaxaca. Gumbo or etouffee without Bourbon Street?  Is there a key lime pie anywhere to match what you can get in Key West after petting a descendent of Hemingway’s six-toed cats? Can Montana Kobe beef match the real stuff from Japan before Fukushima? Why can’t anyone make a true Philly cheese steak sandwich outside of Philly? Is there an Italian beef sandwich anywhere to match one eaten at Al’s under the Chicago El? New York cheese cake in Omaha? St. Louis ribs in Billings?

For sure there are certain foods that suffer in transit. Take the lobsters mentioned above. Even in a pressurized tank, they change every hour they are out of the ocean.

But more often than not it probably isn’t the food that changes as much as our perception of the food. Place, ambiance, locale – they all help shape the dining experience. Take the Senate bean soup out of the Senate dining room, or Boston baked beans out of Boston and what have you got – just bean soup and baked beans.