FEELING MY OATS / funny and serious facts about oatmeal 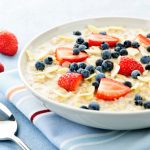 This is about oat groats. Not haute groats, which sounds the same but connotes groats more chic than just oats.

This is groats vs. grotesque. The difference between one of nature’s perfect foods and the junk food McDonalds and others make from it.

What set me off are groat quotes by Mark Bittman – author and journalist. But before I get to that, some oat ABCs: groats are de-husked oat kernels. When steel cut and cooked in water, they turn to oatmeal. But it takes 25 minutes, so most people don’t bother. Luckily for most people, there’s instant – produced by folks who steam the grain, roll it into flakes and pre-cook it for you. Like other presto-food, instant oatmeal is still good for you. It’s just different than steel cut; think fresh tuna compared to canned. Same name, different stuff.

And the more chemicals added to the mix, the differenter it gets.

Now, back to Bittman and his recent article, “How to make oatmeal…wrong.” He says, “Real oatmeal contains no ingredients; rather it is an ingredient.” Then he points to the marketers and manufacturers who feel obliged to add “weird ingredients you would never keep in your kitchen.”

A lot of things can improve the oatmeal experience. But you would probably write for a while before your list included food starch modified, sodium phosphate, datem, sodium stearoyl lactate, sodium citrate, and carrageenan – all extras stirred into one of McDonalds’ versions of “Oats with the most.”

Or this from Bittman: “Take, for example, Quaker Strawberries and Cream Instant Oatmeal, which contains no strawberries, no cream, 12 times the sugars of Quaker Old Fashioned Oats and only half of the fiber.”

Oats are considered a health food. That’s why Quaker sells so much of it and McDonalds uses it to lure people to its burger and fries counters – though Bittner tells us “the McDonalds’ product contains more sugar than a Snickers bar and only 10 fewer calories than a McDonalds cheeseburger.”

So in the name of oatmeal eaters everywhere, here are a few thoughts about combining healthy and good:

Start with the real stuff. My brand is John McCann’s steel cut. Easy to remember. It comes in a can. Called McCann’s. It is sold at Trader Joe’s and Corti Brothers in Sacramento.

You don’t have to cook it. Raw, it is crunchy and tasty. The common approach is to add the oats to boiling water and simmer till your preferred consistency. Two cups of water and one cup of oats makes enough to last a week (refrigerated).

Here’s the trick. You can turn it into something like cobbler without adding anything but fruit.

4 tablespoons of cooked McCann’s steel cut (cooked)
½ an apple diced
4 strawberries sliced
Handful of blueberries
Combine ingredients and microwave three minutes or until the fruit releases its syrup.
Want it thicker or sweeter, substitute banana for one of the other fruits. Peach or cherry season? Add or substitute.

So, yes, instant is convenient. And McDonalds would have you believe that oatmeal, no matter what the extra ingredients, is still better than no oatmeal.

But cooking a pot of steel cut once a week can give you breakfasts every day that rival instant oatmeal in speed and give you an all-star menu of healthy alternatives to datem, sodium stearoyl lactate, sodium citrate, and carrageenan.

Don’t want to get mushy here, but my preference is real oat groats over haute groats. I think most people who try both would agree.