LOUVAR – a fish you may never taste, or even see 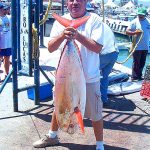 “Perhaps one of the most prized and sought after fish on the West Coast, a fish shrouded in much mystery …”

“Buttery, but not rich … A slight crunch like halibut fin … Smooth texture, no gristle …”

These quotes rained down on my inbox in rapid succession in the last days of 2011. The subject of this adulation was a fish called Louvar. It’s so rare that the entire Wikipedia listing for it is just 115 words

The first quote above topped the weekly email from Jim Oswalt at Gemini Fish Market in Issaquah Washington, a terrific fish store about a mile from where my son John lives with his wife and our two grandchildren.

In his email Jim went on to reveal he had 10 pounds of Louvar available on a first-come-first-served basis.

As luck would have it, John was among the first to come and be served. He stopped by Thursday evening. Here’s how he described what happened:

“I walked into Gemini Fish Market yesterday to pick up some salmon. Jim pointed out a fish he got in called Louvar. He told me he had never even heard of it until a month ago, when someone asked if he ever got it.  He then told me his distributor has only seen it once in 10 years and most people who catch one keep it. Of course I asked if it was sashimi grade and he cut me a slice to try. Holy crap. Buttery, but not rich. A light crunch like halibut fin. Smooth texture, no gristle.”

In a subsequent email John said, “Tonight I seared it in a pan just barely coated with canola oil as I wanted to flash it on a high heat. I served it with al dente broccoli, peas and snap peas. I put no sauce on anything but did put a drop of butter and a little pepper on the veggies.” And here is the reaction from Ella and grandson Miles, who is 4:

So, here’s the skinny. Louvar is so rare that no one fishes for it, either commercially or as a sport fish. Those that are caught usually are taken by chance as part of a sword fish catch. When a commercial boat lands a Louvar the owner keeps it for himself.

According to Jim’s email, “Louvar has been called everything form the ‘Cadillac of Fish’ to the ‘Best Fish in the Ocean’. Louvar is a white fleshed fish with huge white flaky pieces that are firm, sweet, and succulent.”

The fish Jim had on offer at Gemini was caught in Hawaii and arrived at his store the next day, never frozen.

John grabbed 1 ¼ pounds for his family of four. Here’s his assessment after eating it:    “I cannot explain what Louvar is like — texture of a really smooth salmon with a little crunch like halibut fin. Mild as in not fishy like swordfish or mackerel, but not mild as in tasteless like turbot. It stands on its own without anything on it, not like like soles and cods.”

Then he added, “Julie (John’s wife) said, and I agree, it was the single best piece of fish either of us has eaten. It was perfect. I was sad to put the last bite in my mouth because I don’t know if I ever will get to eat it again. I am putting in a standing order with Jim. We got so lucky because we never go there mid-week. Just happened to be a cosmic alignment of variables.”

Larry Dietz, a friend and co-host at the restaurant recommendation web site atLarrys.com, told me his wife, Karen, found Louvar in a seafood store in Santa Monica about 20 years ago. They loved it but never were able to find it again.

Wikipedia describes Louvar as “a big ellipsoidal fish, growing to two meters in length. It is pink in color and possesses a characteristic bulging forehead. It is found in surface waters of temperate and tropical oceans throughout the world.” The other 80 WikiWords on the subject are devoted to a technical discussion of the specie.

A web site for Giovanni’s Fresh Fish Market in Morro Bay offers to ship Louvar anywhere in the U.S., when they have it. The price is $34.95 a pound plus shipping, with a two pound limit and it’s only available on rare occasions. Orders for more than two pounds are not accepted. The site says they get no more than two or three Louvar a year and only from October to December.

If we didn’t have unbreakable dinner plans the few nights after receiving Jim’s email notice about the Louvar I would have phoned him and asked him to ship a piece south to us. As it is, I’ve put in an order for two pounds if he ever gets any more. That’s more than I need for Jennifer and me, but I couldn’t bring myself to ship a smaller piece. So, some lucky friends are going to be invited for dinner at the last minute.