CHEFS, NOT BABES / how we sell cars in the 21st century 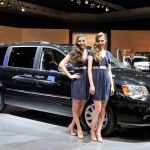 While in college, Joyce earned spending money as a model at car shows. Manufacturers and dealers hired her to stand beside their cars in a swim suit and heels. Her job was to look lovely, smile and hand literature about the cars to men who stopped by.

We dated a few times nearly 50 years ago and I couldn’t help but think of her during the three hours I spent at the SLS Hotel in Beverly Hills one recent Saturday for the Los Angeles stop of the Buick Discovery Tour. If you’re wondering what any of this has to do with food, be patient.

The invitation came to me as a subscriber to Food & Wine magazine, which co-sponsored the event along with the Buick auto division of General Motors. It touted “an exclusive culinary event where you’ll sample dishes demonstrated by Master Chef Michael Psilakis and discover a fresh perspective on food and wine pairings by a wine expert. You’ll also meet the country’s most innovative pastry chef … and experience the latest Buick lineup.”

“Why not,” I thought, “I may be looking to buy a car in the next year; there’s a Buick model I kind of like, although it isn’t a convertible, and the food part sounds right up my alley.”

It was a well-run event, although they could have found a better location to test drive the cars than on the crowded streets of Beverly Hills. I never did get my Lacrosse above 25 miles an hour.

That’s enough about the cars. Let’s get on to the real reason I decided to attend.

When the invitation arrived, I looked up Psilakis on the internet. He was a Food & Wine Best New Chef in 2008 and was Bon Appetit’s Chef of the Year that same year. In the last five years he has been either part owner or chef-owner of seven restaurants in Manhattan, including Fishtag, which he opened in July 2011. His Greek restaurant Anthos was awarded a Michelin star. Good enough to draw me to Beverly Hills.

For his part in the day Psilakis demonstrated a recipe for fried pork and beef meatballs and served samples to some 450 people, who assembled for three separate sessions at the hotel. Each registration packet included a recipe card for the dish. Then, as an added surprise, each person received an autographed copy of Psilakis’ book, How to Roast a Lamb. I will make these meatballs at home. How about a meatball party – Psilakis’ Greek recipe, the Swedish meatball recipe from the old Scandia restaurant in L.A., a very good Italian polpettine that I’ve made through the years, and my own albondigas? Some bread for mopping the sauce and maybe a little pasta?

A happy surprise of the day for me was Josiah Citrin, chef-owner of Melisse in Santa Monica, one of my favorite restaurants in the state. He also is co-owner of the Lemon Moon Café in West Los Angeles. If I were a young chef I would want to work in the Melisse kitchen under Josiah’s tutelage to assure my future success. There had been no advance publicity on Josiah’s appearance.

Josiah opened Melisse in 1999 as the fulfillment of his dream of owning a truly fine dining restaurant. Melisse was awarded two Michelin stars two consecutive years and seven consecutive Best Awards of Excellence from Wine Spectator. Earlier Josiah worked in Paris at the fine dining restaurants Vivarois and La Poste, in L.A. at Wolfgang Puck’s Chinois on Main and then at Granita, and at the original Patina and Pinot Bistro with Joachim Splichal. JiRaffe, a California French bistro in Santa Monica, was his own joint venture with his wife Diane and his friend Raphael Lunetta.

For his part of the Buick event Josiah demonstrated recipes for Hokkaido scallops with cauliflower mousse and a lime gelee. Samples were served and recipe cards provided for this dish. It might be a little difficult to track down a small order of those scallops to make at home. But the cauliflower mousse is within my ability and probably will show up on my table sometime.

What really excited me in Josiah’s presentation was his mention that there is a “Foie for All” dinner on the Melisse menu as a farewell to foie gras, which will be banned in California come July 1, 2012. I love foie gras and Josiah is a genius when it comes to preparing it. He’s also doing braised Kobe beef cheeks, one of Jennifer’s favorites. So, we need to head to Melisse very soon.

The aforementioned “country’s most innovative pastry chef” turned out to be Ben Roche of Moto in Chicago. There is no way I could describe the concept or the food that is served at Moto, and that includes the deserts Roche puts forward daily. Dinner at Moto means 14 courses, the last six of which are Roche’s deserts with a progression of tastes to take the diner from the richness of the main courses to the lightness at the end of a meal. Moto is a home of “molecular gastronomy”, which the website describes it as “the application of both scientific and artistic principles in cuisine. Equal parts chef and inventor.”

At the Buick event, Roche served up a S’Mores Bomb – dark chocolate filled with a liquefied graham cracker puree – and a blue cheese and walnut ice cream frozen with liquid nitrogen. While recipe cards were provided for both and I think I could handle the S’Mores Bomb at home, I think I’ll leave the nitrogen to the pros.

To round out the day wine consultant Michael Green presented a humorous look at wine tasting that was designed to remove the mysteries of wine drinking. Green was Gourmet magazine’s exclusive wine consultant for 19 years. He is president and creative director of Liquid Assets Consulting Group in New York. For his presentation he provided a Rodney Strong Sauvignon Blanc and a cote du’ Rhone blend of Grenache and Shiraz. He used a slice of lemon on each plate to demonstrate the affects on the white wine and a wedge of cheese to demonstrate the changing taste of the red.

So, that’s how we sell cars in the 21st century. And Joyce, wherever you are, you can know it took three nationally acclaimed chefs, a New York wine consultant, a Napa Valley winery and a French Winery to replace one lovely 19-year-old brunette.