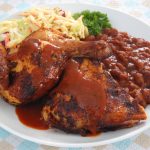 Summer is long gone – a faded rose, as the song says – and now autumn is behind us, too.

Even in sunny southern California we face the chills of winter and the early sunsets. Outdoor grills and barbecues are put away, while we wait for spring, when the days will grow longer, the sun will brightening our lives, we’ll hear again the sound of bat striking ball, and we’ll smell the smoke of red oak or hickory in the air.

But just because it’s winter doesn’t mean we can’t have the flavors of summer.

As those who have been reading this online food magazine over time already know, I don’t do outdoor grilling, even in summer, and I never barbecue. I don’t own the equipment for either task, so I never have to clean up the ashes or scrub the grill. At the same time, I love the flavor of a good rack of barbecued ribs, a Santa Maria style barbecued tri-tip, or a nice piece of barbecued chicken. I just enjoy them at restaurants.

Of the three recipes below the Stove Top Barbecue chicken has been a standby for me for decades. I developed it more than 30 years ago, when we lived in an apartment, had no space for a barbecue, and I had not yet become aware of my distain for ashes and grill scrubbing. I learned about that during summer months when visit the home of my sister and brother-in-law and use their equipment to turn out authentic Santa Maria barbecue. I would vanish while they cleaned up after me. That seemed fair; I did the cooking.

The Pork and beans recipe was an afterthought. I had barbecue sauce left over from the barbecued beans and beans would be a good idea.

The concept of barbecued beans has always amused me. Taken literally it would mean trying to balance each individual bean on the grill of the barbecue. What it means, of course, is baked beans in barbecue sauce, which is what I’ve done here.

OVEN BARBECUE CHICKEN
3 Tblsp extra virgin olive oil
1 tsp smoked paprika
¾ tsp chili powder
1 tsp granulated onion
½ tsp garlic powder
1 Tblsp sweet sherry
½ tsp honey
1 whole chicken – 3 ½ to 4 pounds
Mix first seven ingredients in a bowl to make a paste.
Trim any lumps of fat from the chicken. Use your finger tips to separate the skin from the meat of the chicken. Teaspoon the paste under the skin and use your finger tips to spread it over the meat of the chicken. Rub the remaining paste over the skin over the chicken.
Put the chicken in the refrigerator for several hours.
Take the chicken out of the refrigerator about 1 hour and 30 minutes before you are going to want to serve.
Preheat the oven to 400 degrees. Put the chicken on a rack in a roasting pan, breast side down. Roast for 30 minutes. Turn chicken to breast side up and roast for another 30 minutes. Remove the chicken from the oven and place it on a carving platter. Cover loosely with tin foil for 10 minutes. Cut into serving pieces and serve with barbecued beans.

PORK AND BEANS
¾ lb piece of pork tenderloin
1 15 oz. can of no-salt-added pinto beans
Left over barbecue sauce from the barbecue beans recipe (above)
Pre-heat oven to 325 degrees. Trim the fat from the pork. Place the pork on a rack on top of a shallow roasting pan. Roast for 30 minutes. Cut a diagonal slice into the half way through thickest part of the pork. It should be pink but not bloody. If it seems under cooked put it back in the oven for another five minutes. Slice again to test for doneness. If it needs another five minutes put it back in the oven. Do not let the pork cook beyond pink. Remove the roast to a carving board and cover loosely with tin foil.
After you put the pork in the oven, empty the contents of the can of beans and the left over barbecue sauce into a covered sauce pan. Leave the lid slightly ajar. Bring to a moderate boil and cook until about half the liquid has evaporated.
Put the beans and their liquid into a sauce pan. Add the barbecue sauce. Simmer until beans are heated – about 5 minutes.
Slice the pork on a diagonal, each slice about one quarter of an inch thick.
Divide the beans equally into mounds in the center of two plates. Layer the pork slices on top of the beans. Pour the barbecue sauce over the pork and beans.