FUSION WITHOUT CONFUSION / from youthful necessity to Hawaiian sophistication 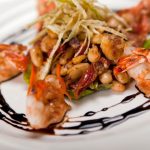 I was a fusion food pioneer. Didn’t intend to be. But surviving the 1960’s on dollars a day meant recipes-of-necessity. And that often called for blending culinary cultures.

So blend I did. Spaghetti topped with canned chili. Tortillas and peanut butter. Or my staple: “idiot’s delight,” an inspired sauté of cabbage, ground beef and teriyaki sauce.

If only I’d been a marketer. Maybe I’d have been the first Wolfgang Puck – the generally accepted (and richly compensated) guru of the postmodern food fusion movement. What’s a Puck caviar and smoked salmon pizza compared to my east-meets-west-meets-south creations?

Not that either Wolfgang or I invented food fusion. Immigrants worldwide have always combined their old homeland cooking traditions with whatever was available in their adopted countries, though most probably stopped short of peanut buttered tortillas.

And a nod to the fast food industry for globalizing sugar and fat fusion. Where would we be without fried chicken nuggets with high fructose corn syrup dipping sauce? Or the fusion of fat and more fat – like fried wings and blue cheese dressing? Not to mention Fiery Fusion Sizzlin’ Cayenne and Cheese Cheetos.

Makes you almost envy old times, when the word fusion was reserved for comparatively innocent concepts like detonating hydrogen bombs.

A lot of folks have opinions about fusion cooking. No wonder. For every abomination, there is an adobo – the delicious marinade from Spanish, Chinese and Filipino ancestry. And while I will never (promise) be tempted by fermented tofu pizza, I celebrate the introduction of ingredients like panko, chilies, pancetta, coriander and ginger into more and more dishes.

But if you want to go where few would deny that fusion works – because of inventive new chefs and 150 years of history – try Hawaii. Sugar, pineapples, bananas and a war lured and shanghaied Chinese, Japanese, Koreans, Portuguese, Filipinos, Puerto Ricans, Americans and English. Native and plantation-era eating habits mingled with preferences of newcomers. Fusion became instinct and pre-occupation.

Having just returned from Maui, I can suggest three very different but equally satisfying examples. None served spam sushi – a more popular fusion item than you might imagine.

From the Mixed Plate website: “In the early days of the sugar plantations … Japanese laborers would bring teriyaki beef with rice and pickled vegetables … Filipino neighbors (had) the traditional dish adobo, or perhaps a pork, or chicken stew… Koreans had their kalbi, or marinated ribs and the Chinese had a rice noodle and vegetable dish called chow fun. Hawaiians were known for their Kailua pig… It wasn’t long before they began to share their foods with one another and the ‘mixed plate’ was born …’Two scoops rice’ and ‘one scoop macaroni salad’ always accompany the traditional plate lunch.”

Roy’s Kahana Bar and Grill – Lahaina
http://www.roysrestaurant.com/locations/
Roy Yamaguchi is the father of Hawaiian fusion. He has restaurants throughout the Islands and mainland. He says,” Since opening the original Roy’s in Honolulu in 1988, we have set out to explore new directions freely blending the European techniques in which I was trained with familiar ingredients of Asia and the Pacific.”

We’ve been to Roy’s half a dozen times over the years. It’s always great. Most recently I had panko crisped spicy ahi sushi rolls with kabayaki glaze and wasabi aioli, and rare seared blackened ahi with spicy Chinese hot mustard butter sauce. Both were excellent examples of fusion as it ought to be.

Mala Ocean Tavern – Lahaina
http://www.malaoceantavern.com/
We started with edamame puree with tomatillo dipping sauce and fresh corn chips. I followed that with a whole, wok fried, caught-that-day opakapaka (snapper) with ginger garlic black bean sauce, shiitakes, tomatoes and snap peas. One of the best dishes I’ve ever had – fusion or otherwise.

Hawaiian fusion dining is a long way from my crude experiments born of empty wallets and cupboards. But like a stranger in a strange land (me and Los Angeles), I combined what I knew with what I could get. That’s what Roy Yamaguchi is doing; what immigrants reinventing themselves in new countries have done for centuries; now diners are discovering new favorites with new ingredient combinations.