FEAST OF THE 7 FISHES / In memory of Jim Tabilio

(We first published this article in January 2011 – a bit late for the 2010 holiday season but we found it warm and tender. Marika Tabilio is the daughter of the late Jim Tabilio, who was one of the original co-hosts at the restaurant recommendation web site atLarrys.com. Some six weeks after we published this article, Jim died of a sudden heart attack at the age of 59. We asked Marika for permission to re-print this article now in Jim’s memory.) 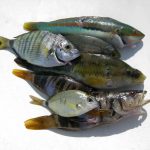 I never have had a Christmas or Christmas Eve with turkey. Or ham. Or goose.

And our Christmas Eve, as Italian Americans, was some take on the traditional Catholic “Feast of the Seven Fishes,” or “La Vigilia.”  Always.

Believed to have originated in Southern Italy, La Vigilia represents the wait for the midnight birth of Jesus. And since Roman Catholic tradition dictates abstinence from meat on holy days, seafood was logically the protein of choice for this holy day. So on Christmas Eve, Catholics would feast on seafood – usually seven different dishes depending on the region.

Our family always took a more relaxed approach to the celebration – we never quite hit seven – but we’ve never broken tradition. You could always count, at the very least, on deep-fried smelts (like anchovies, but slightly larger) and a cioppino of crab, clams, maybe shrimp and whatever else looked good.

So when my parents decided to come to Boston to see me for Christmas, rather than have me fly out to California – quite a serious breach of family ritual – step one was obvious: find the Feast of Seven Fishes on Christmas Eve somewhere in Boston. Luckily one of my father’s many talents, and one of his favorite pastimes, is playing travel agent and food guide, so with a little research he found Grotto.

Grotto is the type of place that you wouldn’t know was there unless you knew it was there. Just behind the State House on Beacon Hill, it’s tucked away on Bowdoin Street, below street level in the midst of a row of brownstones. A short staircase leads down into a dimly lit grotto (ah yes, hence the name…), an intimate interior, exposed brick walls hung with local art, wine bottles in every nook and cranny. Cozy without being claustrophobic, the small room couldn’t have had more than 15 or 20 tables. Soft Christmas music played as guests filed in. According to our gregarious waitress, the restaurant was booked solid for every seating that night.

For this special Christmas Eve dinner, the menu included two options for each of three courses. For my first course, I decided on the seafood salad – perfectly cooked shrimp, calamari and an octopus tentacle on a bed of arugula. I’d never tried octopus before, but it turns out I’m a fan. My dad went for the oyster dish – four of them, each with a small dollop of caviar, cured salmon and prosecco and he was equally pleased with his choice.  So far, delish … and three fish down.

The second course offered a choice between crab and baccalà (dried cod) ravioli and a lobster fra diavolo. I wish I could tell you how the ravioli was, but none of us could resist the devilish pasta option. The heaping helping of fresh tagliatelle cooked al dente of course was as satisfying a pasta dish as a discerning Italian palette could ask for. Coated in a delicately spicy tomato sauce, tossed with mussels and at least an entire tail’s worth of juicy lobster meat, even my carb-conscious mother couldn’t help but clean her plate.  Five fish down.

For course number three, our options were swordfish with clams, potatoes and spinach or pan roasted scallops with monkfish and a wild mushroom risotto.  I can never resist a good scallop, so I went with my instincts and these were some GREAT scallops. The swordfish, according to my father, was tender and delicious. We topped off our meal with some banana bread pudding, and finally left Grotto raving about each plate of food in turn. Out of the five dishes we tried, not one disappointed. Everything was cooked to perfection, portioned appropriately and tasted simply incredible. And, for the first time ever, I ate seven different fish at the Feast of Seven Fishes.

If you happen to be in Boston, make sure to give this place a try.  Every night they have a prix fixe dinner option – $34 a person for an appetizer, an entree, and a dessert. For great Italian fare, this is an excellent deal.

(Marika Tabilio  is a graduate of Wesleyan University. She was born and raised in California and currently lives in Boston.)