IRKS, PEEVES AND IRRITANTS FROM THE WORLD OF RESTAURANT DINING / what really bothers you? 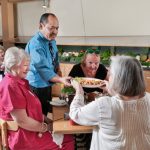 At the risk of sounding like an old curmudgeon, I want to devote a few paragraphs to a discussion of some of the things that can and do go wrong in a restaurant and things that become either pet peeves, major irritants, or just downright unacceptable. Call it an invitation to restaurant owners to do better.

I understand problems are inevitable given the pressures under which everyone works in a restaurant. A well-tuned kitchen staff must move with the precision of a ballet company. There will be missteps and sometimes the results will show up at our table.

There also are customers who bring their own likes, dislikes, quirks and disruptions into play. Hosts and waiters must handle these, too. As much as we might wish it weren’t so, not every restaurant staff member with whom we deal is in the best of moods all the time. Maybe there are problems at home; maybe the problem was the customer who just left in a huff.

The understanding customer will look the other way when little things go wrong, as long as it doesn’t happen too often in the same restaurant. All things considered, however, it’s a wonder we don’t face major issues more frequently.

Those who have been reading this online food magazine for a while may recall my rant last April about disruptive children in restaurants and restaurant owners and managers who won’t do anything about it. If you missed it click on Essays in the menu on the home page and then click on Rants to read “Kids in Restaurants & Cell Phones, Too”. It was an extreme situation that I never will forget and truth be told it was the only incident I can remember as having occurred this year. The owner apologized after and we’ve been back to that restaurant many times since without incident.

On the other hand there’s a well-known and highly rated Italian restaurant in Santa Monica at which we suffered through so many transgressions that we just don’t go there anymore. Jennifer and I had enjoyed many fine meals at that restaurant through the years. Then, on a week night, when the place was not even close to crowded, we had a disaster. We were all but ignored by our waiter; we couldn’t get his attention to ask for another glass of wine or to complain that Jennifer’s rib eye steak was tough beyond edible and way over-cooked.

When we arrived, the host asked if we were celebrating anything special. I hate that question; it implies we wouldn’t be at a fine restaurant for anything other than a celebration. I told the host it was my birthday but I didn’t want them to do anything special. At the end of the meal, after we had gone without a second glass of wine and Jennifer’s plate with the uneaten steak was removed by a busboy, the waiter brought a piece of cake with a candle in it and set it in front of Jennifer.

It was nearly a year before we went back. It had been a favorite restaurant of my friend, the late L.A. Times food writer David Shaw. After David died in 2005, I phoned the owner of the restaurant and told him why we hadn’t been there in such a long time. He offered to pick up the tab if we would come back. I told him we would be back but I would pay for the meal.

Not long after, we booked a reservation for five people to celebrate the graduation from college of a friend’s daughter. We were seated at a round table in the center of the room. There was no reason for the waiter or busboys to reach across anyone when serving food or clearing plates. But they did reach across every time. I complained and received an apology.

We returned a few months later. It was just Jennifer and me this time at a table for two that allowed access from either side. When clearing the bread plates after dinner and before dessert, the busboy almost took my nose off as he reached across me. Clearly, no one thought it was worth the time to train the staff. We’ve never been back. There are too many other excellent Italian restaurants around at which we receive better treatment.

Table staff reaching across diners needlessly is a major irritation for me. But it’s happening more and more. Waiting tables once was a proud profession. Not so much anymore and restaurant owners don’t seem to care about such refinements as serving from one side and clearing from the other – and never reaching across a customer if it can be avoided.

A number of years ago Jennifer and I went to dinner at the very fine River Café in Brooklyn, NY, with our cousins Barry and Beverly and our New York friends Anne and Jeff. It was a cold December night and I wore my east coast overcoat for the cab ride across the East River. When I removed the coat at the restaurant I found I was wearing a shirt and tie but had forgotten to put on my jacket. The restaurant has a jackets required policy for men. They provided one for me and I didn’t object.

What peeves me, however, are restaurants that state a dress code and don’t enforce it. A couple showed up not long ago at one of my favorite restaurants – a very upscale place in the L.A. area. The young man was wearing baggy jeans, a tee shirt and sandals. His companion was dressed slightly better. They were walkups, with no reservations. On seeing the inside of the restaurant, the young woman said, “We should find someplace else.” The young man said he wanted to stay. As we were leaving I asked the hostess about the incident. She said the woman was uncomfortable and they left. I asked why they would seat them given the restaurant’s modest dress code. She explained that in the current economy they can’t turn people away. She also said many young Hollywood executives show up after work these days dressed in jeans and they can’t turn those people away.

It irks me to see the way some people disrespect a fine restaurant in the way they dress – guys who don’t remove their hats, people – usually men – who show up at a fine dining establishment in jeans with sneakers and tee shirts. And the biggest mystery to me is the couple that turns up with the woman wearing a nice cocktail dress or pants suit and nice jewelry and is accompanied by some slob in jeans. Doesn’t she care? Doesn’t he respect her, or where they are going enough to dress better than this?

People who drink beer from a bottle – again, usually men – in a nice restaurant bother me. So does the restaurant that serves the beer without a glass. Want to stop it? Just pour the beer into the glass for him. It may take him a while, but eventually he’ll figure out what to do with it.

People who can’t stay off their cell phones long enough to enjoy the company of the people with whom they are eating … I don’t get it. Texting while dining, too. Rude. You aren’t that important.

I really don’t like it when I try for a 6:30 reservation two weeks in advance only to be told I can have 5:45 or 8 p.m.  I’ve run into that a number of times using Open Table. The online reservation service tries to force me to an alternate time. A call to the restaurant usually gets me the reservation I want.

I love to hear laughter in a restaurant, but I can’t stand loud talking – the kind that disrupts every other conversation in the place.

Slow service, or feeling rushed are two sides of the same peeve. Jennifer and I like to enjoy a cocktail before ordering our dinner. We don’t like it when the food arrives while we’re still sipping our booze. Wine is for food; booze is not. So, when a waiter asks for our food order at the same time we order our drinks, I say we would like to finish our drinks first. Most of the time that works fine. Occasionally we get a waiter who brings the drinks and again asks for the food order. I explain we will order the food after the drinks are finished. If he or she comes back again before the drinks are gone, a line is crossed. Our cousin Barry once asked a waiter at a very fine New York restaurant if they were over-booked that night and if that was why we were being rushed. I understand the need for a restaurant to “turn over” a table during the evening and I understand a waiter makes more in tips from multiple seatings. I make certain I tip well for good service in recognition of my dining habits and likes. But don’t rush me and don’t tell me things are slow because “the kitchen is crushed tonight”.

Food not cooked to order is a big no-no. The person faced with sending it back always is uncomfortable knowing he or she will then be served and eating after everyone else is finished. And everyone else is uncomfortable eating while one person is waiting for his or her food to be served. I encourage sending it back, although I only do it when it’s absolutely necessary.

Dogs in restaurants? It’s not legal for health code reasons. Yet, how many times do you see it – usually women with a small dog peeking out of a carry bag, or someone with a dog on a leash in a sidewalk seating area. Restaurants are as bad about enforcing this as they once were in enforcing designated non-smoking areas. They don’t want to offend the offending customer but don’t seem to care about the rest of us. Before the total ban on restaurant smoking was enacted, we asked for a non-smoking table at an upscale San Fernando Valley restaurant. The waiter led us to our table, removed the ashtray and gestured for us to be seated. Every table around us still had an ashtray.

That about it – for now. Got anything you want to get off your chest. Just go on down to the comments section below and sound off.

Now that I’ve ranted on like this, let it be known to one and all that I have no intention of withdrawing from my life in restaurants. It is one of my great extravagances, one of my most joyful indulgences. I’ve been frequenting restaurants since I was a little kid in New York. Jennifer and I exposed our two sons to the world of restaurants, when they were still very young. They learned how to behave early. I assume they will pass that along to their children.

But who will save us from that guy at a nearby table – the guy with his baseball cap on backwards as he drinks beer from a bottle and ignores his fidgety kid while having a great time talking loudly with his buddy who is relaying the conversation to someone on the other end of his cell phone?