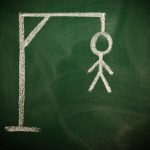 (This book and the commitment to healthful eating are works in progress. This is the final chapter of the first draft of the book.)

For 23 months after the hangman visited and told me of the dangerous situation regarding my coronary arteries, I was good – very, very good. I worked out regularly at a nearby cardiac rehab facility and I managed my diet well.

My weight was down to where it had been in college, the pot belly was gone and I felt in the best condition I’d known for at least 25 years.

Then the hangman’s evil twin showed up. I had passed a significant amount of blood in my urine, visited a urologist, had a cystoscopy and was told I had cancer in my bladder – two tumors.

No nurse wished me luck as I left the hospital after the heart surgery. But nurses wished me luck frequently after the cancer surgery. The difference is most people look at bypass surgery as life-saving; they look at cancer as a death sentence.

I was angry – really angry. For 23 months I deprived myself of sausages and racks of ribs and sub sandwiches and a host of other delights. I was the poster boy for recovery from coronary bypass surgery. And this was my reward – cancer.

At that moment, my only frame of reference was that bladder cancer was what killed my father 30 years earlier. I had not yet learned of the great advancements in treatment of bladder cancer in the intervening decades.

This would be my stiffest test yet and I didn’t handle it at all well. I gained back most of weight I had lost. Complications in the recovery from the cancer surgery limited me to just one week in the rehab facility over the next six months. And when I was finally able to return to the workout room, I didn’t.

Today, I’m still struggling with the impact of that cancer diagnosis and surgery. My doctors are keeping a close watch so if any new cancers appear in my bladder or anywhere else they hopefully will be found early. But when it comes to the diet and exercise that can keep my heart healthy, I’m on my own.

Before our recent trip to Paris I said I was going to leave my diet at home. I knew it was another in a too-long series of evasions. But there was no way I was going to France with restrictions on what I would eat. We’re back now and, with a new resolve, I have been waging a renewed battle to maintain a more responsible diet.

For the first 10 days after we returned from Paris I had oat meal made with soy milk and fresh sliced banana for breakfast every day, except for day I was playing golf and had a banana and two slices of whole grain bread with a no-sugar blueberry jam.

I had sushi for lunch one day, a grilled chicken breast sandwiches one day, a potato knish one day and salads with dressing on the side the other seven days.

As for dinners, it’s been sushi one night, a veal chop at an Italian restaurant one night and very responsible dinners at home the other eight nights – grilled salmon with lentils, homemade cuq au vin, roasted chicken with a healthful homemade barbecue rub (no salt) and homemade pinto beans with a homemade barbecue sauce (no salt added and no fat), left over roasted chicken with sweet potato for me and a yam for Jennifer,

I’ve also invented two new dishes of which I am particularly proud. I was headed for the market on a cold and rainy afternoon after work recently, intent on serving black beans (no salt added) and chicken for dinner. But I decided I wanted something more in tune with the weather. So, I picked up everything I would need for a really busy and hearty vegetable soup. When I was finished, I had most of a small head of green cabbage left over. It became part of a wonderful, steaming hash dish I invented the next night, again in keeping with the weather.

* See recipes on the home page menu of this online magazine for homemade broths.

BEEF & CABBAGE HASH
1 small head of green cabbage – cored and chopped coarsely*
½ brown onion – chopped
2 medium red potatoes
7 Tblsp extra virgin olive oil – divided
1 lb. ground beef – 9 % fat**
¼ cup Worcestershire sauce
Black pepper
Boil the cabbage 20 minutes in water to cover. Drain thoroughly.
Scrub but do not peel the potatoes. Dice the potatoes in small pieces. Cover with water in a sauce pan. Bring to a boil and let boil about 10 minutes, until softened but not mushy. Test it with the point of a knife. Separate the boiled potatoes into two equal size portions. Mash one batch roughly with a potato ricer. Set the other batch aside.
Sauté the onions in 2 Tblsp of olive oil until soft and just beginning to brown.
Heat 3 Tblsp of the olive oil in at large frying pan. Add the ground beef and sauté until crumbly and in the last stages of pink.
When the cabbage is thoroughly drained, mix in the mashed potatoes and onions, then the Worcestershire sauce and freshly ground black pepper to taste. Then mix in the ground beef, including any oil or fat from the bottom of the pan. Taste and adjust the seasoning as needed. All the above can be done ahead of time and refrigerated until ready to use.
About 30 minutes before you plan to serve, remove the mixture from the refrigerator. About 20 minutes before serving time, heat the remaining 2 Tblsp of olive oil in a large frying pan. Add the hash mixture and stir frequently until it is lightly browned. Using the back of a spatula, press the hash down into a pie shape in the pan. Let cook about 10 minutes over medium heat. Try to flip the hash pie with a spatula. But don’t worry – it won’t work. All you really are trying to do is get the other side into the bottom of the pan to brown. Press the mixture down again. Let cook about 8 minutes. I cut the pie into quarters and tried to flip each quarter separately. It sort of worked.
Use your spatula to separate the pie into four pieces again. Then do the best you can to lift each slice onto a plate using the spatula. Again, don’t worry if it doesn’t work perfectly. It is, after all, a hash, not a pie.
This makes enough to serve two people as a one dish dinner. You can feed up to four people if you serve a side salad with the hash. Dropping a softly poached egg on top of the hash after it is plated wouldn’t be a bad idea, either.

* This is the cabbage left over from the vegetable soup recipe.
** If you can’t find 9% fat ground beef, try using ground bison.

In these days since our return from Paris I have suppressed urges to have a Chicago dog, submarine sandwich, or hot tongue sandwich for lunch – urges to which I had been surrendering for the last year. There hasn’t been a meal since Paris about which I wouldn’t want my cardiologist to know. The closest to that might have been a sushi dinner and a sushi lunch. The issue in each case would have been sodium. But when I consider my sodium intake for the entire week, it’s all good.

Now I face two immediate challenges: 1) keep up the healthful diet as described in the earlier chapters of this book, the one that says you can eat well on a low-sodium, low-fat, low-cholesterol diet and 2) somehow muster the will to get back into the rehab facility. The latter is the tougher of the two. A persistent knee injury makes the treadmill and stationary bike problematical and golfer’s elbow has just about made the arm bike impossible.

Confronted with all this, I am reminded of the wise words of a friend who said: “this is the #@!& that happens if you are lucky enough to get old.” So far I’ve been very lucky.