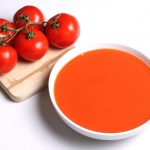 I’m not a fan of winter. When the daytime temperature drops below 65, or it even looks like it might rain, I want to hibernate – lock the doors and windows and stay indoors.

Like so many others, the reason I live in Los Angeles has a lot to do with the weather. I can play golf in shirt sleeves in January; I can drive around with the top down on my car in February.

So, when we had a rain storm and a cold snap in early October this year, I turned downright grumpy. And with that, my culinary impulses turned in the direction of hot and hearty comfort food. Here’s what I came up with for dinner one night.

PREP
Bring the water to a boil; add the barley and cook per package directions.
Bring the broth to a boil. Chop the tomatoes; peel the carrot, then quarter it lengthwise and dice it; slice the squash lengthwise and then dice it; clean the mushrooms, remove the stems and cut them into quarters, cut the mushrooms into sixths or eighths, depending on the size.

METHOD
Put the tomatoes into the boiling broth and turn the heat down to a slow boil for 20 minutes. While the tomatoes are cooking, prepare the rest of the vegetables. Blend the tomatoes and broth using either a blender set on puree or an immersion blender. Strain the tomato/broth through a sieve. Use the back of a spoon to force any pulp through the sieve. Discard the tomato seeds. Bring the tomato/broth mixture to a slow boil. Stir the red pepper flakes, oregano, basil, salt and pepper into the broth mixture and stir well. Add the carrot, squash, mushrooms and cooked barley and stir. Cook at a slow to moderate boil for 35 minutes.

SERVE
Two cups of soup in a bowl with two teaspoons of cheese for a first course.
For a hearty full meal, serve a second bowl for each person along with some crusty Italian bread.