IT STARTED WITH TAPAS / how small plates swept the nation 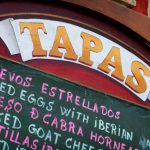 It started with tapas. About 10 or 11 years ago the Spanish appetizers hit the shores of the U.S. in a big way and quickly spread across the nation. First it was a spate of tapas restaurants. They did so well that other restaurants felt pressure to include tapas sections on their menus.

I bought a couple of tapas cookbooks and prepared an array of 16 tapas dishes and pitchers of sangria for a dinner party for eight people at home.

Tapas evolved into “small plates” at restaurants that wanted to be free of the constrictions of Spanish-only dishes, and chefs became ever more creative in what they were offering on those plates. When the economy started to tank, the small plates concept quickly morphed into restaurants dedicated exclusively to small plates. By ordering small plates diners could share a few dishes and head for home with a much lower total on the credit card receipt. At the same time, wine lists grew to include more “by the glass” offerings, which helped keep profit margins healthy.

The natural successor became wine bars – restaurants at which the “by the glass” wines are the featured items and the small plates are the supporting cast.

There’s no telling how long the tapas rage might have lasted, or if it would have given birth to the small plates movement at all had it not been for a sinking economy. It could have remained a novelty in Spanish restaurants. After all, we’ve had dim sum at Chinese restaurants for as long as anyone can remember. Turkish restaurants have offered Meze and antipasti has long been served as a traditional first course at Italian restaurants.

But it wasn’t until tapas found their way across the ocean and became established just ahead of a plunging economy that today’s small plates rage blossomed.

Now, we arrived at a time when we order enough small plates to make a meal and drink enough wine with those plates to create restaurant bills at small plates establishments that rival kinds of totals we see and full serving places. But the concept of small plates has become embedded.

In Spanish tapas means “lid”, or “cover”. Wikipeda lists several explanations of how the word came to mean small portions of food. One says a food item would be placed on top of a glass to protect a drink from fruit flies, thus making it a cover. Sounds possible when one considers the amount of fruit in sangria. Another similar explanation is that since a tapa usually is eaten while standing in Spanish bars, people would balance their plates on top of their drinks making a “top” and leaving a hand free with which to eat. There’s also a story that has King Alfonso XIII ordering a drink at a tavern in Cadiz and the waiter placing a plate of cured ham on top of the cup of wine to protect it from the blowing sand. When the King wanted a second drink he asked for another wine “with the cover.”

Whatever the origin of the word, we are the better for the arrival of tapas in the U.S.

Jennifer and I have eaten at two outstanding small plates restaurants recently – one in Los Angeles and another in Chicago.

Barbrix is in the Silverlake area of Los Angeles and worth the trip from anywhere in Greater L.A. We visited recently with two friends and found four people at the table is an ideal number. The kitchen will adjust the size of any dish to accommodate the party. We grazed our way through the entire menu – roasted cauliflower, Spanish sausages, blistered Shishito peppers, charcuterie, saffron arancini, Moroccan spiced lamb chops, a few other nightly specials, plenty of wine, and a cheese selection to finish things off.

You can read Larry Dietz’ recommendation of Barbrix on our sister web site, atLarrys.com – http://www.atLarrys.com

Girl and the Goat in Chicago’s West Loop neighborhood belongs on any food lover’s list of musts. It would make a trip to Chicago in the dead of winter worth the time. We opted for a more sensible July visit. Table reservations run about six weeks ahead. But the bar is really the place to be. There it’s first-come, first-served. Hang out and wait for space to open up. Then chat with the bartender, learn about the nightly specials, pick some dishes from the menu and get ready to be dazzled.

Girl and the Goat was opened by Stephanie Izard in July 2010. She was the winner of Bravo’s Top Chef Competition in season four. You can read more about Girl and the Goat in Part Two of “A Food Lover’s Journey” listed under Travel in the menu for this magazine.

As for the notion of small plates restaurants being a refuge during a down economy, I suppose that works for some people. For Jennifer and me, however, and for the friends who joined us at Barbrix it didn’t work that way. We satisfied our appetites, made certain we didn’t skip anything we might later regret, and just wrote the check when the credit card bill came through.

JOIN THE FUN.  Go to the comments section below and share a recommendation for your favorite tapas restaurant, small plates restaurant or wine bar in your town, or anywhere else you may have traveled.