FED UP – is extreme eating really eating, or fun to watch 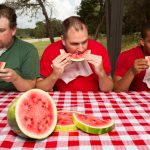 Unless your tastes run to watching rows of drooling contestants go totally Donner Party on heaps of hotdogs, matzo balls, tamales or sticks of butter, you’re probably as fed up with competitive eating exhibitions as I am.

A couple minutes of champ Joey Chestnut penguining soggy hot dogs and buns this Fourth of July was all I could stomach.

But nearly 2 million of us actually watched at least part of the Nathan’s Famous Fourth of July Hotdog Eating Contest, so who am I to make light of coming attractions like the World Poutine* Eating Championship on the calendar for the end of September?

For the record these unappetizing omnivores are not gluttons. They’re gurgitators: modern day descendants perhaps of collegiate goldfish swallowers of 70 years past.

Legend has it that Harvard freshman Lathrop Withington inadvertently pioneered the sport of goldfish chugging in 1939 on a $10 bet. Today’s pro eaters are in it for substantially more.

A moment of silence for Pat “Deep Dish” Bertoletti who won $1,500 for sucking down almost four pounds of rocky mountain oysters** in 10 minutes.

Come to think of it, if tractor pulls can be a sport, why can’t eats of strength? There are just a few questions I’d like answered before I buy into it.

Can we assume that “Roman incidents,” also known as “reversal” and “urges contrary to swallowing,” are bad things in eating competitions? How about chipmunking?

Considering likely post-contest output, who would want to dethrone a champion?

How literally should we take the concept of sudden death overtime?

If someone eats 12,000 calories of hotdogs, who wins – the contestant or the wieners?

In the World Turkey Championship, was cranberry sauce on the undercard?

Would politicians and Fox News anchors have unfair advantages because of their unnatural jaw strength?

Truth is I just don’t have the intestinal fortitude for another helping of eat-til-you-drop. But more is on the way. Big-time sponsors are betting big-time money on people’s interest. So are TV networks.

Get ready for chew-view cams. Instant replays. DPM (dogs per minute) stat crawls on the lower third of the screen. And celebrity revival tent barkers whipping up the eating frenzy.

What’s next? Competition-eating camp for youth craving a starring role in their own gurgitation action video game? Clever community relations consultants donating part of the contest gate to food banks and obesity-prevention research?

In 1939, as the goldfish swallowing record exceeded 40, a Massachusetts legislator carried a bill to “preserve the fish from cruel and wanton consumption.” In today’s world, the Mayor of New York, presumably an opponent of other aspects of pornography, enthusiastically supports the deep-throating of 68 nitrite-laden hotdogs.

Thanks to prize money, media exposure and the dream of notoriety no matter how meaningless, more and more people are looking for venues to beat the clock as they consume a big percentage of their bodyweight.

One of the sponsors is Pepto-Bismol. Now there’s a company that knows its market. I could use some just thinking about it.

EDITOR’S NOTES:
1) * Poutine is a plate of French fries topped with cheese curds and covered with brown gravy or sauce. The fries are of medium thickness and fried so the inside stays soft, while the outside is crunchy. The gravy generally is a light chicken, veal or turkey gravy, mildly spiced with a hint of pepper, or a sauce brune which is a combination of beef and chicken stock, originating in Quebec.
2) Damon Runyon’s character of Nicely-Nicely Jones, a successful competitive eater, appeared in his short story “A Piece of the Pie”. Nicely-Nicely later appeared in the musical “Guys and Dolls” but without the eating competition.
3) ** See a reference to mountain oysters and other epicurean euphemisms in FUN WITH EPICUREAN EUPHEMISMS elsewhere at this food magazine.