A FOOD LOVERS’ JOURNEY – Eating like a local in Toronto 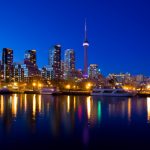 It’s better than a traveler’s guide book, better than a restaurant rating books, better than one of those web sites that allow everyone and anyone to post opinions about where to eat and where not to eat.

It’s called local knowledge and it comes from knowing someone in town.

Toronto in Ontario, Canada has been called “the New York of Canada” and to be sure it is a big and fairly sophisticated city that abounds with restaurant choices. Fortunately, when we visited there recently, our food-loving, fun-loving cousins Barry and Beverly were our personal guides.

When we weren’t being wowed by what Beverly had prepared and set before us on the table at their home, they were squiring us around town to some of the restaurants that are among their favorite haunts. Here is a look at some of the insider places they took us.

DT BISTRO-PATISSERIE is located at 154 Harbord St., Toronto. It’s very small and very much in demand. Chef-owner Donald Doung made his local reputation as a top dessert chef with Dessert Trends Bakery, which he opened in 1999. After going on to earn the top Gold Medal at the World Culinary Olympics in Germany he opened Desert Trends Café in 2005. Later, he changed the name to DT Bistro. A scroll through the patisserie and cake sections of the web site is like a visit to an art gallery.

The place is light and informal and has the feel of a sidewalk café and the food is as fine as anything you will find anywhere. Barry and Beverly told us they eat at Don’s (that’s what the locals call it) at least once a week and we could understand why.

I started with an in-season soft shell crab that was perfection. Jennifer opened with a duo of bruschetta that include heirloom tomatoes, creamy goat milk ricotta and shrimp with tomato garlic pesto. Another highlight on the list of starters is a wild mushroom tart in crispy phyllo with goat cheese.

There are five wonderful choices of pasta dishes, including mushroom pappardelle with or without braised beef, French potato gnocchi, chicken artichoke fusilli, crab and ricotta cannelloni, and lobsters and chorizo pappardelle.

The menu changes regularly but these dishes are a great representation of what goes into the planning and cooking at DT Bistro. And remember, Chef Don earned his spurs on desserts.

UNITED BAKERS DAIRY RESTAURANT is at 506 Lawrence Ave. W., Toronto. It is a family-owned and family-operated kosher dairy restaurant that’s been in business since 1912. But you don’t have to keep kosher, or to even be Jewish to love the food and the feel of this treasure.

The history of the Jewish population of Toronto, as well as Montreal is not widely known. David Sax writes about it and its impact on the local food scene in his book “Save the Deli”, which is recommended under “Food Book” at this online food magazine.

To say we went crazy at United Bakers would be an understatement. I haven’t seen a dairy deli like this since the days when I was growing up in Brooklyn in the 1940s. Jennifer and I went so far as to order the gefilte fish, which we never do in a restaurant. And it was magnificent. There’s only so much you can cram into one lunch and we tested the limits. Excellent lox and cream cheese on bagels, top notch cheese blintzes, fillet herring in sour cream sauce with onions that made us swoon, and potato latkes that were perfect.

If I lived in Toronto I would look for an office close to United Bakers and eat lunch there every chance I got.

COFFEE MILL RESTAURANT is at 99 Yorkville Ave., Toronto. We arrived in town, checked into our hotel, unpacked and Barry and Beverly immediately steered us to the Coffee Mill for what was supposed to be a lite lunch.

The menu is eclectic, with a tilt toward Mediterranean and the sinful siren of sausages. Jennifer showed great restraint, ordering half an avocado stuffed with baby shrimp. But show me pan-fried kolbasz with mashed potatoes and warm red cabbage and get out of the way. Diet? What diet? I’m a sausageaholic and this one was worth every milligram of sodium and fat.

BAR MERCURIO is at 270 Bloor St. W., Toronto. Located on a bustling thoroughfare, this is a great place to meet for a quick lunch. Pizzas are excellent – thin crusted with perfect toppings. The four of us shared two pizzas – a Margarita and one with mushrooms and tomatoes.

There’s a very good selection of pasta dishes on offer and good coffee and coffee drinks.

SCARAMOUCHE RESTAURANT is at 1 Benvenuto Place in Toronto. This is more upscale than the others we’ve listed, the kind of place for celebrations – birthdays, anniversaries, etc. We enjoyed it with nothing to celebrate beyond the good company of cousins visiting cousins.

This is the restaurant where I found steak tartare on the menu after we were told it was against the law to serve hamburgers cooked to less than medium-well in other restaurants. I wrote about that in an earlier chapter in this series – A Food Lovers’ Journey. Of course, I had to order it. Again, diet? What diet?

Game fowl is a weakness of mine. So, I passed on the grilled sirloin of veal and ordered the partridge. I find veal on many menus and eat if frequently. But partridge appears only now and then. I was more than just satisfied. There also were enough other fish, beef, lamb, and pasta offerings to satisfy any preferences.

It isn’t very likely that we would have discovered any of these gems had we arrived as tourists with no local “connections”. If you’re heading for Toronto and don’t know anyone there, these restaurants are can’t miss recommendations. And if you happen to know a local or two, dazzle them with your knowledge of their town. And above all: eat hearty.