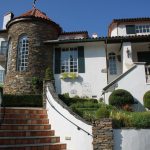 Ever think of this one: the difference between tryst and trust is just one letter?

Neither did I, not until Jennifer and I spent a few days at Chateau du Sureau and dined three consecutive nights at Erna’s Elderberry House in Oakhurst CA.

The Chateau and restaurant combine to inspire such thoughts, even in the mind of a guy who was there with his own wife.

It starts with the location. Chateau du Sureau and Erna’s Elderberry House are tucked away on nine acres on a hillside 16 miles from the south entrance to Yosemite National Park and 90 minutes from the Yosemite Valley floor. The chance that you will run into anyone you know at the Chateau or restaurant is somewhere between slim and nil.

The Chateau has just 10 rooms plus a very exclusive villa, further reducing the odds of bumping into someone you might not want to see. Each room is magnificently appointed, with views of the well-manicured flower gardens and shrubbery. And each room provides a feeling of privacy and isolation – like you have the whole place to yourself. There are no television sets in the room, although they’ll move one in if you must.

There’s a large and peaceful central sitting room, with comfortable chairs and couches and a large chess set. The only times we saw other guests during our three days at the Chateau were at breakfast, which was provided in a subdued room right off the kitchen. Breakfast also can be served at a table in the garden or in your room. If you ask the night before, a wake up cup of coffee or tea will arrive at your room at an appointed time.

There is a spa on the property and packages are offered that include accommodations, spa treatments, and dinner at Erna’s, a quiet, romantic restaurant with old-world style that commands diners to dress accordingly. Some men wore ties; most did not but wore collared shirts and jackets. Most of the women wore dresses.

We had the five-course prix fixe dinner each of the three nights we were there. That’s a total of 15 different courses, plus three amuse-bouche servings and there wasn’t a miss in the bunch.

Austrian born Erna Kubin Clanin opened her first restaurant, Scorpio’s, in Los Angeles in 1969. Eight years later she pulled up stakes and leased a restaurant called The Redwood Inn in Yosemite National Park. After six years of wowing guests with five-course prix-fixe dinners in the park, she bought the site in Oakhurst that would fulfill her dream.

Erna’s Elderberry House opened the restaurant in 1984, decorated with fine antiques, polished pewter and rich fabrics from Provence. It wasn’t long before the restaurant began to draw diners from around the world. But there were no accommodations in Oakhurst to match the quality of the restaurant. So, Erna set about building the Chateau, which she opened in 1991.

Our first night at the restaurant the menu consisted of seared Atlantic diver scallops, puree of sweet red pimiento, roasted breast of Pitman Ranch duck, salad of arugula rucola and lettuces, and a dessert of jivara milk chocolate bombe and fantasy grape ensemble of vanilla cremeaux and lemon sherbet.

And for the final night it was roasted California wild king salmon, soup of heirloom tomatoes with a crepe and shaved prosciutto, seared loin of nature fed veal, salad of market greens and a dessert of dark chocolate and black mission fin terrine and gratin of Valencia orange with cantaloupe sorbet.

Now here’s the kicker: the five-course, prix fixe dinner is priced at just $95 per person. A wine pairing is offered for an extra $75.

Erna’s Elderberry House plays hosts to a number of special events throughout the year, including “A Night in Vienna” and Erna’s signature “Elderberry Harvest Dinner”. Erna and executive chef Gunnar Thompson also conduct cooking schools of from one-half day to three days.

Most nights you can say hello to Erna as she roams through the restaurant to greet diners.

Now back to the matter of trysting. One dictionary definition of a tryst is a secret meeting planned by lovers. Those lovers couldn’t ask for a better place than the Chateau and restaurant in Oakhurst. But neither could a couple looking to celebrate an anniversary or birthday, or two people like Jennifer and me, who just love great food and elegant locales. And when those two come together, it’s worth the journey.