A FOOD LOVER’S JOURNEY / ZINGERMAN’S DELICATESSEN, ANN ARBOR, MICHGAN – It asks the question: when is a deli a deli? 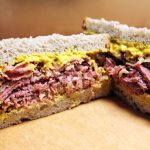 (Number 3 in a series of articles – A FOOD LOVER’S JOURNEY.)

As a place to select from an impressive assortment of cheeses and a variety of specialty hams, Zingerman’s Delicatessen is worth a visit.

But is Zingerman’s a true delicatessen?

We stopped at Ann Arbor as part of this journey for the specific purpose of visiting Zingerman’s, which had been highly touted by atLarrys.com co-host Larry Sheingold and our mutual friend Jim Hayes.

On our first visit I ordered a corned beef on rye with a kosher dill pickle. I was a bit disappointed. The meat was flavorful but too lean for my taste. My own fault. I didn’t know lean was the standard at Zingerman’s and I didn’t ask. I chatted with the young man who cut the beef for my sandwich and he told me to ask for it with some fat left on next time. Fair enough.

Next time I went for the pastrami on rye. It was heavenly. Both sandwiches were served on a fabulous, double-baked, hand-sliced Jewish rye that is as good as any rye bread I’ve ever eaten and both came with a perfect, crisp kosher dill pickle.

So, why is there a question about Zingerman’s stature as a true deli?

It stems from a different question: what is a deli, or delicatessen?

In the common vernacular in the United States deli is most often used to describe a place to buy and/or eat a type of food that has journeyed down through the centuries with the Ashkenazi Jews as they migrated around the globe.

A classic definition of a deli is a place that sells any kind of specialty food – usually high quality and most often including smoked or cured meats, which can be made into sandwiches or sold by the pound. But, again, in the U.S. the purest use of the word deli applies to Jewish food of a specific style and origin.

There are places in the U.S. that bill themselves as Italian delis, but you won’t find any such creature in Italy. The word “delicatessen” derives from the German, but I don’t recall ever seeing a German restaurant or grocery store that billed itself as a deli. I have, however, seen fast food joints at gas stations call themselves delis when the only food remotely approaching deli food was a shrink-wrapped bologna sandwich on white bread. I’ve also seen markets that include a “deli counter” but don’t call themselves delis.

So, why is it questionable as to whether Zingerman’s is a deli?

First, to find the corned beef on rye on the giant, over-head menu board, I had to hunt through a list of 80-plus sandwiches. Eventually, an order taker with a pad jumped in to help. The sandwich I sought is number 81 – Oswald’s Mile High. That’s the sandwich pictured at the top of this article. Pastrami on rye doesn’t even have a number. It’s listed as Don’s Rhythm and Blues.

All the other corned beef or pastrami sandwiches on the board were adorned with various cheeses, and/or krauts, and/or Russian dressing. One corned beef sandwich even comes with chopped liver and lettuce.

My, my, my. How far we’ve drifted from true kosher deli food. It’s not that I keep kosher. It’s just that when I eat deli meats I want to taste the meat, undisguised. As sandwiches, some of the Zingerman’s other offerings might be wonderful. But as deli …? With Russian dressing?

The second reason why I have difficulty calling Zingerman’s a true deli has to do with what isn’t on the menu and what is treated as an after-thought.

There’s no kishka. But there is Kentucky sausage and gravy. There are several specialty smoked salmons, but lox is something they have “sometime”, according to the counterman with whom I spoke. Lox and cream cheese on a plain water bagel doesn’t appear on the menu, just smoked salmon on a sesame seed bagel. Fourteen desserts include Southern Hummingbird Cake, but no rugula. There are more different kinds of pork sandwiches than there are corned beef of pastrami combined.

Chicken soup is listed as Jewish Chicken Broth; rice or noodles are extra. Near the end of the online menu and in a tiny corner of the counter there is a section identified as “Jewish Food.” There you will find knishes in puffed pastry, filled with egg and potato, but no traditional meat or potato knish. Blintzes are filled with parmesan cheese and will be heated on request. Noodle kugel is an unappetizing yellow block wrapped in cellophane.

History would indicate it hasn’t always been like this at Zingerman’s. The web site says “the deli got its start with a small selection of great-tasting specialty foods, a host of traditional Jewish dishes and a relatively short sandwich menu.” Zingerman’s has drifted far from that beginning.  Today there are a host of sandwiches and a very short supply of traditional Jewish dishes.

On the other hand, Zingerman’s deserves its place as an Ann Arbor institution and is a worthwhile destination for travelers.

The Zingerman’s web site touts “A tradition of American food” and it hails July/August as Tour de Bacon. Visitors are urged to “get on the pig trail.” Many delis in the U.S. now serve bacon and other pork products.

atLarrys.com co-host Larry Dietz remembers seeing bacon on a menu in Tel Aviv. When he asked from where it was imported, he was told the pigs were raised in Israel and the pig farm was constructed with slatted wood floors on which the pigs stand because it’s the law that the animal cannot be on Israeli soil.

In his wonderful book “Save the Deli” – reviewed under Food Books at this magazine – David Sax sings the praises of Zingerman’s. The primary subjects of the book, however, are the evolution of deli food through the centuries and the state of the deli business around the world today. He rates Zingerman’s as a deli. I would rate it as a deli, but with an asterisk to indicate it qualifies only by contemporary standards.