RADIOACTIVE ALBACORE TUNA FROM FUKUSHIMA ARE ARRIVING IN U.S. WATERS – How great is the risk to you? 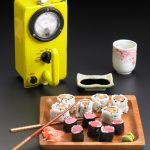 Those schools of Pacific albacore tuna that were swimming around off the coast of Japan in the weeks following the Fukushima nuclear power plant disaster are starting to arrive along the northwest coast of the U.S. and they are beginning to show up in restaurants and markets. Before they began their migration across the Pacific in April these fish that frolicked and fed amid the radioactive fallout from Fukushima.

For diners who include albacore as part of their diet, either at sushi bars, or seared on the grill at home, the choices are limited: buy a Geiger counter and take it to the sushi bar or fish market, stop eating albacore, or ignore the risk and go on as usual.

I checked out the cost of Geiger counters online and that doesn’t seem like much of an option. They’re pricey – anywhere from several hundred dollars on up to a thousand or more – and many dealers say they have been out of stock since things went hay wire in Japan.

As you consider what to do, don’t get sucked in by promises of federal inspection of food imported from Japan. These fish will not be considered imported. They will be caught by U.S. companies in U.S. waters and will be treated as domestic catch, which is subject to far less stringent screening than imported fish.

Before leaving Japan Pacific albacore tuna feasted on massive amounts of smaller fish such as sardines, anchovies and squid in the waters contaminated by radiation from Fukushima. As the albacore made their way east to the coast of Washington and Oregon they consumed as much as 25% of their own weight each day.

The question is not if those fish will bring radioactive iodine 131 and/or cesium 137 from Japan’s Fukushima nuclear power plant to U.S. restaurants and markets. The question is how many fish will carry the contaminants, how much they will bring and how much radiation will slip through the inspection process and reach consumers.

Bluefin tuna is another matter. Bluefin swim in the Atlantic. It is extremely popular as sushi, particularly the very fatty belly (toro). Bluefin and Bluefin toro are the most expensive items on most sushi menus. Restaurant owners can pay $8,000 to $10,000 for a whole Bluefin tuna. Over-fishing is becoming an issue but there are not yet any questions about excessive radioactivity the in Atlantic food chain.

Pacific albacore tune also is a very popular fish at sushi bars in the U.S. and for grilling at home, most of the domestic catch ends up in cans – the ones marked “white” tuna.

As we reported in April, a group of fishermen in Washington asked the U.S. Food and Drug Administration (FDA) to test the migrant tuna in the hope of reassuring the public and averting a consumer panic. But the FDA can’t test every fish and random testing of some fish is no guarantee that the next fish in the school won’t be the one that ingested the iodine or cesium.

The Bloomberg news agency reported recently that hay containing 2,300 times the allowable limit of cesium had been fed to beef cattle in Japan and beef containing radioactive cesium had reached markets in that country.

At the same time, Bloomberg reported, “a growing threat to Japan’s food chain as unsafe levels of cesium found in beef on supermarket shelves were also detected in more vegetables and the ocean.”

Sentaro Takahashi, a professor of radiation control at Kyoto University in western Japan, told Bloomberg, “Some areas (of the ocean) still have high radiation dosages and if you also eat products from these areas, you’ll get a considerable amount of radiation.”Japanese radio reported recently that Cesium-134 in seawater near the Fukushima plant climbed to levels 30 times the allowed safety standards in tests performed by Tokyo Electric Power Co.

The Bloomberg report added: “Japan has no centralized system to check for radiation contamination of food, leaving local authorities and farmers conducting voluntary tests. Products including spinach, mushrooms, bamboo shoots, tea, milk, plums and fish have been found contaminated with cesium and iodine as far as 360 kilometers from Dai-Ichi.” (That’s more than 224 miles.)While the albacore question is complicated by the migratory habits of the fish, there are issues concerning other fish commonly found at sushi bars in the U.S.

Hamachi (yellow tail tuna) served in most U.S. restaurants is farm raised in Japan. It is treated as imported fish in the U.S. and may be subject to closer inspection than the albacore that is caught in U.S. waters.

Much of the best uni in the world is being harvested off the coast of Santa Barbara California. Iron Chef Morimoto serves Santa Barbara uni in his New York restaurant. The sushi chef at your favorite place should be able to tell you the source of the uni they are serving.

That would seem to be the best course: ask the sushi chef or fish monger where they are getting their fish. There’s always the option of saying you don’t want anything imported from Japan and then deciding how much risk you are willing to take when it comes to things like Pacific albacore tuna.

(You can find two earlier articles we published on this subject under Healthy Dining in the Table Talk atLarrys.com home page menu.)