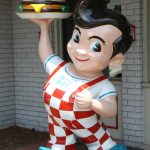 It was a 1950s ritual: lines of teenagers in cars waiting to park and eat in the car hop service area of a Bob’s Big Boy restaurant.

The lines were longest on Friday nights during football or basketball season, when we might wait an hour or more to order a Big Boy double-decker hamburger, a side of fries and a milk shake, which a waitress would bring on a metal tray that hooked onto the car door. Many nights during the week we would head for Bob’s after a couple of hours spent “studying” at the library. Summer evenings after a day at the beach, Saturday nights before or after taking in a movie … Bob’s was an important social center of our universe. The burgers? By our teenage standards, we thought they were very good. More mature palates might look elsewhere. (www.atLarrys.com has recommendations for several excellent burger restaurants.)

Lifetimes have been lived since those carefree days. If I had thought about it two months ago I would have guessed the Bob’s Big Boy chain had dwindled down to just one restaurant – the landmark place on Riverside Drive in the Toluca Lake neighborhood of Burbank, California. That’s the location of the one where I made so many fond memories of my high school years.

So, it was something of a shock when we pulled off the highway in Stevensville, Michigan this summer and came face-to-face with the large plastic figure of a chubby boy holding a hamburger aloft and a sign proclaiming our arrival at Big Boy Restaurant. We were driving from Chicago to Stratford, Ontario, Canada and just happened to pick this off ramp to leave the highway in quest of lunch.

There were no car hops, or any place that could function as a drive-in, but the menu inside contained many of my old favorites, including the signature double-decker hamburger, bowls of chili, and thick milk shakes.

On one of the condiment bottles on the table I found the words: “Big Boy is a registered trademark of Big Boy Restaurants International LLC” followed by an address in Warren, Michigan. I jumped on the internet at our hotel that night and tracked down Big Boy Restaurants International. In short order I learned that my perceptions about the demise of the small chain of restaurants that had been so important a part of my youth could not have been more totally wrong.

The old familiar ones I knew in Glendale, Pasadena and Van Nuys are gone. But the chubby Big Boy statue and the Big Boy Hamburger can now be found at some 455 franchised restaurants across the U.S. and Canada. Big Boy Japan operates another estimated 199 restaurants.

My Bob’s – the one in Toluca Lake – was built in 1949 by local residents Scott MacDonald and Ward Allen, who operated it as a franchise under the Bob’s umbrella. By the early 1990s the restaurant had fallen into disrepair and the chain of restaurants had been sold twice. Car hop service had been eliminated and there was talk that the site was destined for the wrecking ball.

Then, in 1993, the MacDonald Family bought control of the Toluca Lake restaurant and began a restoration project that led to a designation as a “State Point of Historical Interest.” A new patio dining area was added; the towering Big Boy sign was restored; the dining room was remodeled and car hop service was returned on Saturday and Sunday nights. In keeping with the history of the location the parking lot is given over on Friday nights to a classic car show. It’s not hard to imagine, as one walks among those cars, that some of these very vehicles might have been in one of those Friday night lines back in the 1950s.

The Toluca Lake location is the oldest remaining Bob’s Big Boy restaurant in the world. I knew of its revival because I live close enough to see the place on occasion. What I didn’t know until my sojourn onto the internet after that lunch at Stevensville was the saga of the Bob’s Big Boy restaurants after I left high school behind.

First, a little history: Robert “Bob” Wian sold his DeSoto Roadster in 1936 and used the money to buy a 10-seat restaurant in Glendale, California. He named it Bob’s Pantry. Legend has it that a regular customer challenged Wian to create a hamburger completely different from all others on the market. From that challenge evolved the sesame seed bun cut into three pieces instead of the usual two. Wian put two meat patties and extra layers of cheese between the bread slices and created the first double-decker hamburger. Then he added some lettuce and his own relish.

The burger was an instant and huge success. By 1948 Wian had three restaurants serving his signature Big Boy Hamburgers. The name Big Boy was derived from the nickname of a six-year-old boy who would hang around the original Pantry and help sweep and clean. He also was the inspiration for the iconic logo of the chubby boy with the hamburger held high.

For some time Wian resisted recommendations to franchise the Bob’s Big Boy name and products. But, when imitators began to pop up across the country, he yielded. One of those imitators was a restaurant called McDonald’s in Pittsburgh, Pennsylvania, a franchise whose owner has admitted basing his Big Mac on Wian’s Big Boy double-decker hamburger.

Early on Wian created a stock option and profit sharing program for his employees. He also instituted an employee health care benefit. Wian sold his restaurants and franchises, then numbering some 600, to the Marriott Corporation in 1967 for $7 million worth of Marriott stock. Shareholders of Bob’s stock received two-thirds of a share of Marriott stock for every share of Bob’s stock. Many former Bob’s line cooks and waitresses became very wealthy people.

More recent history found Marriott making a string of bad management decisions and unloading what was left of the Bob’s Big Boy restaurants and franchises in a sale to the Elias Brothers, one of Wian’s original franchisers, in 1987. They brought back the original management concept and menu and ran the operation until 2000. Forced into bankruptcy, the restaurants and franchises were sold to Robert Liggett Jr. He renamed the enterprise Big Boy Restaurants International and still heads the operation today.

Bob Wian died in North Hollywood, California after a traffic accident in 1992 at the age of 77. He left behind a legacy far larger than the hundreds of restaurants that grew from the original investment of the few hundred dollars he got from the sale of his car. He wrote the pre-amble to new chapters in the food and restaurant industry. For hundreds of thousands of people now in their 60s and 70s and 80s, his Bob’s Big Boy restaurants created a world of memories – memories of a Big Boy, side of fries and a milk shake too thick to drink with a straw served on a metal tray hung on a car door after a football game.

P.S. – I couldn’t resist the temptation. In Stevensville I ordered a Big Boy and a side of fries. It tasted just as I remembered it.