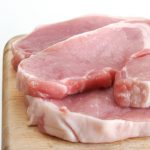 Cook’s Illustrated has a terrific article on pork meat and pork products in a teaser edition I received this week designed to entice me into a subscription.

It struck a nerve – a raw nerve. I love pork meat, but in recent years I’ve been shying away from buying it at the butcher shop or ordering it in restaurants. In their zeal to produce the healthy “other white meat” pork vendors have bred all the fat out of the animals. And with the fat went the flavor.

The Cook’s Illustrated article gets into this and many other interesting issues about raising and butchering pigs and cooking different pork cuts at home. The article is titled: A GUIDE TO BUYING FRESH PORK- Here’s everything you need to know about cooking today’s lean pork, including identifying the best cuts and choosing the proper cooking method. The article is authored by Rebecca Hays.

Ms. Hays begins by telling us: “In 1985, amid growing concerns about saturated fat in the American diet, Congress created the National Pork Board with the goal of helping producers provide consumers with the leaner meat they desired.”

The Board and producers got together and soon turned out more muscled pigs, with an average of 31 percent less fat. “This is good news for our waistlines, but much of the meaty flavor, moisture and tenderness disappeared along with the fat, causing some cuts of fresh pork to taste like diet food,” Hays wrote.

Those of us who have cooked pork at home or ordered it in restaurants know the result. My favorite cut for decades was the rib end of the pork loin. Even after trimming some of the fat, there was enough left to impart moisture and flavor into the meat. I’d make a Chinese style marinade and cook it at 325 degrees for 35 minutes to the pound. Over the last few years, I’ve reduced the time to 20 minutes a pound and still I’ve been disappointed with the results. It turns out cooked beyond pink; it’s tough and chewy and has little flavor other than the marinade. Last time I tried it I said, “Never again.” Pork tenderloin, which I used to cook for 40 minutes at 325 degrees, today is over-cooked in 25 minutes and without the marinade it, too, would have no flavor. Pork chops? Forget it. Four minutes per side is risky.

Hays’ article comes complete with illustrations of various cuts of pork, an illustration that shows which cuts come from what parts of the pig, tips about the best way to cook each cut, and a cost per pound index. But overall, she doesn’t offer much hope to those of us who remember the wonderful flavor of real pork.

“Because modern pork is remarkably lean and therefore somewhat bland and prone to dryness if overcooked, a product called enhanced pork has” been introduced to the market, Hays writes. This pork is injected with a solution of water, salt, sodium phosphates, sodium lactate, potassium lactate, sodium diacetate, and varying flavor agents to bolster flavor and juiciness,” Hays reports.

This has the effect of increasing the weight of the pork by 7 to 15 percent. But the Pork Board claims the purpose of enhancement is not to improve inferior meat but to boost the overall quality of the product.

Here’s an idea: stop breeding the quality out of them in the first place.

To top it off, Cook’s Illustrated did a taste test matching the enhanced and unenhanced pork. The judges decided the latter has more genuine pork flavor.

In another taste test Cook’s Illustrated bought “center-cut pork chops from farmers who raise heritage breeds the old-fashioned way (the animals roam free and are fed wholesome, natural diets) and tasted them alongside supermarket chops.”

The results were frightening: “Tasters had an interesting response to the farm-raised pork, noting that while it was juicier, with significantly more fat than the super-market chops, it also had unusual ‘mineral’ and ‘iron’ flavors. Some tasters also found the extra fat in the old-fashioned pork left behind an unpleasant coating in their mouths. Surprisingly, most tasters favored the more familiar supermarket meat. A few tasters thought that the old-fashioned pork was delicious but definitely an acquired taste.”

So that’s what we’ve come to: natural pork flavors are an acquired taste.

The magazine didn’t disclose the identity of the tasters. Maybe they all were too young to know anything about how pork tasted 30 years ago and they just went for what they grew up eating. Either that or the magazine needs a new pork supplier.

All may not be lost even if it sometimes feels that we are doomed. On a visit to Australia a couple of years ago we bought a pork roast with all the fat and skin on it. We (my sister-in-law Sylvia and I) roasted it up, marveled at the aromas as it cooked, devoured the “crackling” (roasted skin) and with the help of my wife Jennifer and Sylvia’s husband Brian, we demolished a tender, juicy, tasty hunk of pork.

That’s a long way to go for a good cut of pork. I imagine China would be another place to find good pork. But here at home – good pork probably is going to remain difficult to find. You can criticize the food industry all you want, but as long as we keep buying their engineered products without flavor (think tomatoes) what incentive do they have to do anything different.

We recently tasted a very good novelty pork called Mangalitsa, which we bought at Corti Brothers in Sacramento and cooked at our son and daughter-in-law’s home. An article about that experience will appear soon on the pages of this magazine.

When it comes to pork chops on restaurant menus, I tend to take a pass. However, there is one restaurant where I would order the pork chop any day of the week: Formoli’s in Sacramento, where the chops are always perfectly flavored, perfectly cooked and enticing. If you know of any other restaurants where good pork still is served, drop down to the comments section below and let us know.