PERFECT YELLOW FIN TUNA OR UNIQUE MANGALITSA PIG – What would you pay for a once-in-a-lifetime meal? 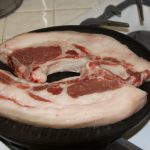 What’s the most you ever paid for a pound of tuna fish – sashimi grade? Would you pay $40 a pound for yellow fin tuna if you knew it was a “once in a lifetime” seafood opportunity?

What’s the most you ever paid for a pork chop in a butcher shop? Would you spring for $95 for four one-inch thick chops if you knew the pork would taste the way pork tasted before all the fat and flavor was bred out of it? What if you knew some 70% of the weight was fat?

If you answered “yes” to any or all of the above you are a certified foodie of the first order.

These are not just idle curiosities. I’ve spent close enough to $500 for a meal enough times to know I wouldn’t hesitate to hit that mark and beyond. I’ve never had the blow fish opportunity, yet under the right circumstances I could see myself doing it. The tuna question arose in a recent email from Jim Oswalt of Gemini Fish Market in Issaquah Washington – www.geminifish.com. There’s a chapter devoted to Jim and Gemini in the travel series “A Food Lover’s Trek from Los Angeles to Fairbanks and Back”, which you can find under Travel on the menu of the home page of this online magazine.

As for the pork chops, I actually bought them – $95 for four chops. We’ll get back to them in a few minutes. But first, about the yellow fin tuna.

Jim’s email began with the following: “Alright, this will probably be the only time that I tell you about a ‘once in a lifetime’ seafood opportunity that I passed on. That’s right, I let this stuff go and I might be kicking myself when I get your response, but the reason I’m telling you about it is that I need to know if you’d be interested in product of this caliber and if I should jump on it the next time it happens. You’re thinking, ‘Jim, if it’s once in a lifetime, then why bother?  We’re never gonna see it again.’ Well, I was offered ‘once in a lifetime’ tuna twice this week, Jim wrote, ‘so I’m guessing it’ll be offered up again and maybe soon’. We may be in the ‘once in a lifetime’ season.”

Jim explained that his Hawaii connection landed a 215-pound day boat yellow fin tuna that was so fatty that his contact never had seen a fish of this quality in the entire time he’s been dealing in seafood in Hawaii.

“The Japanese have a name for tuna of this quality that means ‘snow on the mountain tops’, or something to that effect,” Jim says. “They call it this because of the white fat lines that run through the blood red flesh. I guess it was melt in your mouth phenomenal tuna that we don’t see here on the mainland and that they rarely see in Hawaii. I passed on it because I had to buy 20 pounds and would have had to sell it at $40 a pound.”

Jim then went on to ask the customers on his email list if “you sashimi freaks out there have interest in trying this quality of tuna and would you pay $40 for it. Let me know your thoughts.  I’m sure we’ll have this caliber of tuna offered up again.”

By return email I told Jim I don’t think I would buy it for him to ship overnight to Los Angeles because of the loss of freshness, although I would be eating it less than 48 hours after it had been in the ocean. Of course I would get on the phone to see who wanted to join in the fun to determine how much to buy. Certain memories are worth making. If I had enough notice – a few hours might do – and I could clear my schedule I would hop a plane to Seattle, drive on over to Issaquah and have a sashimi feast with my son John and daughter-in-law Julie that night. We’re going to be in Issaquah in August. With any luck the blue fin tuna fairy will smile on me.

My life tends to run toward that kind of luck, as the recent Mangalitsa pig escapade demonstrates.

In early June 2011, I had one of the ‘life sends you a message’ moments. The Sacramento Bee ran an article about a unique breed of pig call Mangalitsa. My son, Lloyd, emailed the article to me. Four of these pigs had made their way into the Northern California food world. Ella Dining Room and Bar and the Kitchen in Sacramento landed some of the prized stock. (Both are recommended at atLarrys.com.) The Thomas Keller Group got the front legs to make charcuterie. The rest turned up at the butcher counter at Corti Bros. market in Sacramento.

As it turned out, we were going to be in Sacramento a few weeks later. Lloyd checked with his friend at Corti Bros. and learned the store would be getting another shipment in on the very day we were arriving. He ordered four chops.

The Bee article made the meat from the Mangalitsa pig sound like the best tasting pork since U.S. raised pork used to have flavor. It also talked of the extreme amount of fat on the animals. We did some internet research and found the Mangalistas originated in Hungry. The ones being served and sold in Sacramento were raised at Suisun Valley Farm near Fairfield California. Mangalitsas are raised for a minimum of 18 months and can weigh in at up to 500 pounds. That’s about three times longer than the typical commercial pig is raised. All this adds dearly to the cost of the meat. We paid $18.95 a pound for our four pork chops, which weighed a bit over one pound each. In a market the loin goes for close to $20 a pound and the shoulder at Corti Bros. ran $9 a pound.

“It reminds me of Kobe beef, or those other pure breeds of Japanese cattle” such as Wagyu, chef Noah Zonca of the Kitchen told the Bee. “It has flavors that you just don’t find in other pigs.”

“The problem at retail is you cut and leave a lot of the fat on,” Mike Carroll, meat department manager at Corti Brothers told the Bee. “Customers see that and don’t want to pay that kind of money for the fat. It’s a lot easier to sell at restaurants.”

Even though we saw some large cuts of Mangalitsa in the meat counter at Corti Bros. – fat and all – we were stunned when we opened our package of pork chops. There was easily a two-inch ribbon of fat surrounding the bone and a fairly small eye of actual meat. But this is not your ordinary pork fat. The Mangalitsa fat is high in mono-unsaturated omega-9 fatty acid, related to the oil found in olives. It has a buttery texture and melts at very low temperatures.

For our preparation, we needed two cast iron pans. We stood two chops on edge in each pan and melted down some of the fat. Then we sautéed the shops in the fat. Were we to do it again, we would render the fat at a higher temperature and sautée the chops over lower heat. (The photo atop this article is of two of the pork chops we bought at Corti Bros. and cooked at Lloyd and Edie’s home.)

Our pork chop experiment had mixed results and there is little likelihood of us ever doing this again. Later research uncovered the fact that Mangalitsa pig isn’t really intended to become pork chops. Mangalitsa pigs are meant more for bacon, sausage, salami, etc. At The Kitchen it was used to fill raviolis. The Bee reported The Kitchen also turned out a pork shoulder that was slow-cooked for 20 hours and then braised; the pork belly was cured into bacon and Mangalitsa ham. The Thomas Keller Restaurant Group – The French Laundry, Bouchon – used its Mangalitsa pigs mostly for dry curing and aging. Ella Dining room and Bar used its first lot for a house-cured bacon that went into a carbonara pasta dish.