HOW TO MAKE AN OMELETTE FOR ANY MEAL – It’s Easy! All you need is a stove top, an omelette pan and an idea 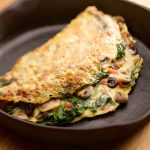 There are only three things you need to become kitchen royalty when it comes to omelettes – a stove top, an omelette pan and an idea. Omelettes come from ideas, not from recipes. And even though they appear most frequently in the breakfast section of menus, omelettes can be a wonderful, light meal any time of the day – even at dinner.

Through the decades I would venture to guess I have cooked several thousand omelettes and their close cousins – frittatas, not the baked kind but the ones that are done stove top and are like omelettes that don’t get folded. In all that time I doubt that I’ve ever made the same omelette twice. That includes my bachelor days, when my housemates and I would host omelette breakfasts on Sunday mornings. You can read about those carefree days by clicking on “Cooking for A Beautiful Woman” on this web site and dropping in on Chapter Eight – Convertible Cars and Celebrity Bars.

There was a time when I would eat two dozen eggs a week, pretty much every week. Breakfast at home would consist of two soft boiled eggs (two minutes, not three) or two eggs poached very soft. That got me to 14 eggs a week. The additional 10 would come in the form of lox and eggs and onions at a deli for lunch, an omelette for lunch or dinner, sausage or ham and sunny side up eggs after closing a bar, a raw egg in a Caesar salad or atop my steak tartar …

Then, about 22 years ago, my doctor told me to knock it off; my cholesterol was through the roof and that could lead to heart disease. My egg consumption dropped immediately to about four a month. I’ve eased up a bit in recent years to maybe eight or 10 a month.

I never considered eggs to be exclusively breakfast food, although I certainly consumed more than my share of fried or poached eggs with bacon, ham or sausages, when eating breakfast out. Fried pork chops and eggs with grits is still a favorite. But in these days after my coronary bypass surgery I limit that to about once a year.

Omelettes, however, are a different matter. During the hot summer months they are a perfect dinner food. Every one brings a fresh opportunity to be creative and each first bite is an adventure in new combinations of herbs, spices, meats, fish and vegetables. One week it might be ham, cheese, mushrooms and onions with Herbs de Provence. The next week it could be ham, avocado, and cheese with Fines Herbs and Tabasco. Then come tomato, avocado and bay shrimp with tarragon, parsley and garlic.

Soups and stews offer the same freedom to be creative. But if you are going to do them justice you can’t just whip them up in 30 minutes the way you can with an omelette.

How to make an omelette – flexible recipe

To give you a nudge in the right direction, let’s start with the egg part of the omelette:

Break two or three eggs into a mixing bowl. Beat them with a fork or a whisk until foam starts to form at the edges – about a minute or so. I like to add a little orange juice, carbonated water and milk. Beat the eggs again until you see some more foam. Then add your herbs and spices and black pepper to taste. I never use any salt; I get enough flavors from everything else.

While I’m doing this if I’m going to use onions in this particular preparation, I have some thin sliced onions browning in olive oil. I like to pour the egg mixture over the browned onions so the onions become part of the base. Sometimes I skip the onions and fold some chopped raw scallions into the omelette at the last minute before folding it or on top of the frittata just before serving it.

Now comes the real trick – how to keep the omelette from sticking to the pan. I’ve heard advice running from high heat to set it quickly to low heat to keep it from burning. I prefer low heat to start and raising it bit by bit as the eggs start to set. When the eggs have set slightly, use a spatula to lift the edges while tilting the pan so some of the runny part on top can ooze under the omelette.

As for the fillings or the toppings, it’s up to you how well you want them cooked. You can layer thinly sliced tomatoes on the eggs as they set, or you can chop the tomatoes and add them at the last minute, or even use them as topping.

If you are using cheese you probably want to layer it on the eggs early so it has a chance to melt.

You can use avocado or salsa as a filling or a topping after the omelette is folded.

If you’re using shrimp, chicken livers, sausage, bacon, or the like, they should be fully cooked before putting them into the omelette or on top of the frittata.

That’s it for technique. As for the fillings, let your instincts guide you. You can use single fillings or combinations. I recently go a new idea from one of our favorite restaurants, where prawns are served in a tarragon sauce. My next omelette was made with shrimp and tarragon.

OMELETTE TIP: You can give your omelettes any number of ethnic bents by varying the herbs and spices you use: oregano or basil for Italian, cumin and chili powder for Mexican, Fines Herbs or Herbs de Provence for French. Don’t forget some Tabasco or crushed red pepper flakes for a little heat or some Worcestershire sauce for a hint of anchovy.

A SPELLING LESSON: Microsoft spell check spells I omelet; Wikipedia prefers omelette. As for restaurants, you’ll find it either way. But no matter how you spell it omelettes are your chance to show off.  Use combinations of these ingredients as fillings, toppings or stirred into the egg mixture. As your omelette skills grow, add your own ideas for fillings and toppings and prepare to wear the crown of kitchen royalty.