MUSSO AND FRANK GRILL – Where history meets the future in Hollwyood 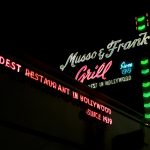 It began innocently enough: Jennifer and I had dinner at Musso and Frank Grill in Hollywood a few months ago. When we got home, I informed my facebook friends of the latest wonderful meal we just had at this legendary restaurant.

It quickly transition into pure panic: My friend Ric Torres responded to my facebook posting with the news that his friend J.P. Amateau had been hired as a restaurant consultant to re-make the Musso and Frank menu. My fingers screamed across the keyboard: “Tell him he can’t touch my marinated herring or liver and onions.”

“Tell him yourself,” Ric answered, and he gave me Amateau’s contact information.

After several phone conversations, a 90-minute interview with Echeverria and a 60-minute interview with Amateau, I came away confident that everything will be OK. Two guys – Mark Echeverria and J.P. Amateau – whose combined age is not as great as the age of this 92-year-old restaurant, have accepted responsibility for making sure Musso and Frank Grill remains true to what has earned it a place in the hearts of loyal patrons and employees since it opened in 1919.

Mark Echeverria represents the fourth generation in the lineage to the family that bought Musso and Frank from its founders in 1927. Through most of the first decade of this century the Echeverria family owned 50 percent of the restaurant but had nothing to do with running the place. Some 18 months ago the Echeverria family bought out their partners and took full ownership. Mark, now 31 years old, was installed to oversee every day operations.

Here’s where the story gets scary. Mark Echeverria had absolutely no experience in the restaurant business when he took over the operation. Neither did any other member of the family. The restaurant business is risky enough for those who know what they’re doing. But it had been two generations since anyone from the Echeverria family had any involvement in running a restaurant. That would have been Mark’s grandfather.

Mark earned a degree in international business at Regis University in Denver. Then he alternated jobs between guiding fly fishing expeditions in Alaska in the summers and managing operations at a ski resort at Lake Tahoe in the winters.

So, what inspired this group of neophytes to buy out a major restaurant; what have they been doing since, and how have they managed to succeed?

“There are some very smart people in my family,” Mark explained. His attorney father heads the family corporation and his contractor uncle also is involved. “Not only are they very smart,” Mark added, “but they have great business sense.” The family bought control of the restaurant with a commitment to do whatever it takes to reinvigorate it and continue the tradition. When asked how the family plunged into the challenge of operating a risky business in which it had no experience, Mark said, “We read every book on restaurant management we could find.”

What they discovered set off alarms, Mark explained, and most of those alarms were in the kitchen.

First they reviewed comment cards turned in by customers for the previous six months. “They the fell into two categories,” Mark said. “About half offered high praise for various waiters and other staff members. The other half mostly raised issues mostly having to do with the inconsistency of the quality of the food.”

That led them to a jaw-dropping discovery: there wasn’t a single recipe in the building. All the dishes being offered on a long and complicated menu were being prepared by cooks who had learned from their predecessors. It all was hand-me-down word-of-mouth.

Next, the Echeverrias found that no one on the staff had any idea what it cost to put any of the menu items on a plate; no one was costing anything out, and ordering of supplies remained the same throughout the year, with the same quantities of items ordered during slow periods and busy times alike.

Mark credits customer loyalty and staff dedication for the survival of Musso and Frank. Not only was the business management of the restaurant lacking, the building is in the center of Hollywood, where neighborhood decay had chased people away for some three decades.

“Customers would drive up to the parking lot in the back, come into the restaurant through the back door, leave by the back door and drive out of the neighborhood,” Mark said.

Musso and Frank was a destination for loyalists in the midst of a neighborhood where no one other than tourists and the night people wanted to go. Foot-traffic tourists in shorts and tee shirts never have been much of a part of the trade at Musso and Frank. Those folks aren’t looking for quality food at expensive prices for lunch. And after dark the younger crowd was more interested in wandering along the sidewalks or cruising the boulevard.

Faced with potentially serious problems and with no real experience to apply to those problems, the family turned to a head hunter – a firm that acts as agents for chefs and high level restaurant staff. After interviewing a number of potential consultants, they met J.P Amateau and things clicked.

J.P. is a 45-year-old L.A. native, who first ate at Musso and Frank while seated at the counter with his father some 38 years ago. He graduated at Beverly Hills High School and enrolled at the Culinary Institute of America in New York. After an internship at the Grand Hyatt in New York, he returned to Los Angeles for a stint at Trumps. Then it was on to France and Germany before heading back to the west coast and the Stamford Court in San Francisco. Next up was the old Eclipse restaurant in L.A. and his first post as executive chef.

After stays at the Beverly Wilshire Hotel and five years at the Parkway Grill in Pasadena, J.P. decided 16-hour-days at restaurants were not the way he wanted to start his marriage and raise his young family. So he became a restaurant consultant. He would be his own boss, make is own schedule and concentrate on helping restaurants improve the business management of their kitchens – the back of the house, where the quality of the food and the economics of ordering and storing it can make or break a restaurant.

Talk about doing something even more risky than running a restaurant. There were no other restaurant consultants in the area; there was no such job or career path. J.P. just forged his own path, not at all certain it would work. Through word of mouth and the assistance of a head hunter placement agency, he started to land clients, working on no more than two restaurants at a time.

“I was doing well, although the economy made it tough,” J.P. says of the time before being introduced to the Echeverria family. J.P. went to work as a consultant on the Musso and Frank project on Oct. 10, 2010. He was nervous that he might meet some resistance from the firmly entrenched staff at the restaurant but says that never happened. Right from the start everyone in the place was supportive and cooperative, he says. They all love the restaurant and were committed to doing whatever it took to make sure it thrived.

J.P. spent his first six weeks at Musso and Frank “observing in the kitchen and taking notes.” He looked back over months of food orders to see what customers were eating and what menu items were not selling. He installed new systems for managing purchases, reworked a confusing menu, wrote down recipes based on what he observed and determined the yield and costs for each recipe.

Things worked out so well that the Echeverrias offered J.P. the position of executive chef. He accepted and in April 2011 became only the third person to hold that position in the 82-year history of the restaurant. He was ready, he says, to get back into the kitchen and the fact that the kitchen is at Musso and Frank made the decision easier.

As for my marinated herring and liver and onions, they both live on. So does every other item that appeared on the regular Musso and Frank menu. Some prices needed to be raised to reflect the reality of the costs of producing them; prices for other items were lowered. The confusing array of every-other-week special daily menus was abandoned in favor of occasional chef’s special dinner offerings.

But for the customers in the chairs, nothing has changed. It’s the same old knowledgeable staff, including three bartenders with a combined service of more than 100 years at Musso and Frank. The well-seasoned flame grill still turns out wonderful beef entrees. The drinks are honest and generous. And all my fears have been put to rest.

At one point in our interview, I asked Mark Echeverria if they were planning any changes to the front of the house – the restaurant’s two dining rooms. I loved his answer: “People ask why I don’t replace the murals on the walls because they are yellowing. See that yellow up there? That’s Humphrey Bogart’s cigarette smoke. Why would I want to get rid of that?”

And what are the biggest sellers on the menu? Number one by far is fillet mignon – flame broiled. About 25% of all food sales at Musso and Frank are red meat. Short ribs would be the second biggest seller if it was offered every night. But it’s a special available on Saturday nights only.

Finally, I hit Mark with the key question: where do you get your lamb? He told me they tried several sources; it came down to a choice between Colorado and Sonoma and they went with Colorado. Right answer. Colorado is producing the best lamb in the world right now.

So there it is: two guys, whose combined age is 76 years, have accepted responsibility for prolonging the life of the 82-year-old icon that is Musso and Frank Grill. While they go on about their business inside the restaurant, the neighborhood around them is undergoing a steady revival. Diners no longer have to duck out the back door and hurry away after eating. Instead, they can step out the same front door through which generations of studio executives, writers, actors and other luminaries have passed and onto Hollywood’s boulevard of dreams.