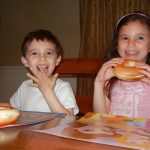 Or are you more traditional? Plain? Onion? Sesame seed?

One thing has become clear: Bagels are multi-ethnic, multi-cultural and multi-national. Bagels aren’t Jewish any more.

My awareness of this reality dawned in 1995, when I was interviewing a woman for a job in an election campaign my firm was managing. We met at Jerry’s Deli in Westwood CA. My Latina lunch companion ordered a bowl of chili and a bagel. I told her next time I would have lox on a tortilla.

Now all the teenagers working the counter at the main Western Bagel plant in Van Nuys CA near where we live are Latinos. Most of the customers, other than the police officers who stop in for their morning coffee, also are Latinos and much of the commerce is conducted in Spanish.

The first time I saw a blueberry bagel in the display case I shook my head in disbelief. By today’s standards blueberry is mild. Today we see jalapeno bagels, chocolate chip bagels, peanut butter bagels, and a mind-numbing list of others.

But what came next is a sign of how far the bagel has traveled since the time not many years ago, when we would order a bagel in a deli and get a bagel – a water bagel, otherwise known as a plain bagel. There were no other options and the notion that a bakery someday would offer 40 varieties of bagels was beyond comprehension.

At Western Bagel the second biggest seller is the “everything bagel”. Third place is close between cinnamon raisin and onion.

Zingerman’s in Ann Arbor Michigan reports “enough already” (a version of “everything”) and sesame rank two and three.

Exactly how international are bagels?

There’s a Muslim restaurant in Guangzhou China that sells a pseudo bagel – the hole doesn’t go all the way through.

In Finland they are called Vesirinkeli. In Russia, Belarus and Ukraine bubliks are very similar to bagels, but are somewhat bigger, have a wider hole, and are drier and chewier. Lithuanians call them riestainiai and the Slavic name is baronkos. In Xinjiang China they eat a form of bagel known as girdeh nan, from the Persian word meaning round bread. In Turkey a salty and fattier form is called açma and a ring-shaped simit, marketed as a Turkish bagel, is very similar to the twisted sesame-sprinkled bagels sold in early 20th century Poland. In some parts of Austria they sell ring-shaped pastries called beugel.

In the United Kingdom they are spelled beigel; in Rumania they are covrigi. In Toronto and Montreal it’s the Yiddish pronunciation of bay-gel. In Northern Ontario Province they are pronounced as bag-el. The first kosher bagels were brought to Japan from New York in 1989.

And finally, the bagel leaped into space in 2008, when Canadian-born astronaut Gregory Chamitoff took 18 sesame seed bagels along on a mission to the International Space Station.

There are a number of colorful legends regarding the origin of bagels and for virtually every one there is a detractor saying ‘it isn’t true.’ Most but not all accounts track bagels back to an origin in Poland.

The most popular legend has the bagel being created in the shape of a stirrup to commemorate the victory of Poland’s King Jan Sobieski over the Ottoman Turks in 1683. Not so, says Wikipedia, which claims the bagel “was actually invented much earlier in Krakow Poland as a competitor to the bublik, a lean bread of wheat flour designed for Lent.”

Zingerman’s in Ann Arbor calls their water bagel the 1610, a reference to another legend that has the bagel rooted in that year. This one claims a 1610 document from Krakow mentions “beygls” as something given to women to bite on during childbirth. But the document doesn’t say what a beygl is. It may be what later came to be known as a bagel, or it may be more closely related to a beugal, the Polish word for stirrup, which brings us full circle to legend number one.

In her book The Bagel: the Surprising History of a Modest Bread Maria Balinska, offers several theories regarding the origin of the bagel. She claims the known history dates back at least six centuries. She writes of the possibility that bagels came to Poland from Germany during the 14th century migration. It was in Poland that bagels came to be “Jewish food” for reasons having to do with politics and discrimination.

The bagel crossed the Atlantic to take up residence in the Jewish neighborhoods of Toronto and Montreal in Canada and the lower Eastside of New York during the great immigration of Jews from Eastern Europe in the late 1800s and early 1900s. As the Jewish population spread to Brooklyn, the Bronx and across the river to New Jersey, the bagel followed along. But until the early 1960s it was pretty much just plain water bagels.

The advent of machines to mix the dough and larger ovens in which to bake the bagels after they were boiled or steamed opened the door for the array of bagels that greet us in bakeries today. About the same time, America ushered in the era of frozen foods and packages of frozen bagels began to appear in markets throughout the land.

By the end of the 20th century bagels surpassed doughnuts in popularity in the United States. Americans were spending three-quarters of a billion dollars a year on bagels and only half-billion on doughnuts. Perhaps it had something to do with the fact that a sugary doughnut delivers about 10 grams of fat, far more than what one gets in a plain bagel.

To feed this hunger bakers have run amok in delivering flavors.

Zingerman’s produces more than 450,000 bagels a year. All are hand-rolled, boiled and baked fresh every night. All are sold at Zingerman’s locations in Ann Arbor and a few other local stores.

H&H Bagels is the largest bagel bakery in New York City and one of the largest in the world. They produce about 80,000 bagels a day. Information regarding the various types of bagels turned out by H&H was not available.

Western Bagel has 11 retail outlets in the Los Angeles area. They have the capability to produce 5,000 bagels an hour at their two plants but couldn’t give us a total of how many they produce in a year. Western also supplies some 75 delis and restaurants throughout Southern California including Brent’s, which many believe rivals Zingerman’s for “best deli in the nation” status.

No matter where it originated, the journey of the bagel has been long and its evolution continues today. As for the future, all seems secure. In the photo at the top of this article are my 6-year-old grand daughter and 4-year-old grand son eating one of their favorite lunches – a plain bagel.