KIDS IN RESTAURANTS & CELL PHONES, TOO 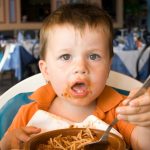 What do you do when the kid three tables over in the restaurant is banging his or her fork or spoon on the glass table top? Or kicking his or her heels against the wood under the banquet in a thunderous quest for attention? And the parents are oblivious?

When you take your child, grandchild, niece or nephew to a restaurant, what do you do to assure his or her behavior will not disturb others? When you are there with another couple with a child, do you have a nice adult conversation and let the kids amuse themselves with the crayons the restaurant may provide or can you resist that temptation and make the children the central focus at the table?

How old do you think a child needs to be before he or she is taken to a coffee shop or deli? How about an upscale restaurant for a meal that might last two hours?

When a child is so disruptive in a restaurant that half the house is on edge, whose fault is it?
A)    The child?
B)    The parents?
C)    The restaurant?

These are among the questions I raised and discussed with a number of friends after Jennifer and I had what we would kindly characterize as an unfortunate dinner experience recently at one of our favorite restaurants, one that is decidedly upscale. These discussions by no means constituted a representative sample of the population as a whole. While the people with whom I explored the subject ranged in age from those in their early 40s with young children to several in their 60s with grown children and grandchildren, they all tended to be educated, sophisticated and of comfortable means.

Here are the highlights of the dining experience that launched me down this road.

We’re seated at one end of a bench style banquet in a very nice restaurant, one at which we are regulars even though it isn’t in our home town of Los Angeles. As the waitress set our cocktails in front of us, a man, woman and their two-year old son were seated at the other end of the banquet – maybe 10 or 12 feet away from us. The child immediately started to jump on the banquet and Jennifer could feel the jolt every time he landed. I was sitting opposite her in a chair, so I was spared this part of the experience. Next the child put the toes of one shoe on the table and, when his parents didn’t say anything, he edged half his foot onto the table. Next, he stood and looked over the glass divider that separates his side of the bench from the table behind him, intruding on the privacy of the people seated at that table. He dangled a piece of bread over the head of the woman with her back to him, as if he were going to drop it on her. Finally, he scooted under the table and ran around the restaurant before returning to the bench and again jumping up and down on the bench. The cycle of this child’s behavior repeated itself over and over again, while the parents virtually ignore the situation.

We asked to be moved to a different table and as the waitress was moving us she apologized for the situation. During the evening several of the staff stopped by our table to again apologize as well as vent their frustration. We asked why they didn’t just ask the family to leave, maybe box up the remainder of their order and send them on their way with no bill. We were told only the owner is authorized to ask people to leave and she wasn’t on site. In the meantime the child’s out-of-control behavior continued until another customer approached the father and said something we couldn’t hear. But we heard the father’s reply: “Weren’t you ever two years old?”

So, whose fault is it?

It’s hard to blame the child. He’s two years old and probably shouldn’t be in an upscale restaurant for a two-hour meal to start with. Same probably is true of three and four year olds.

The parents?  Selfish would be an understatement. Arrogant would be appropriate. So would ignorant and insensitive. They should know their child and know what to expect from him. The child is not prepared to be in a restaurant; they should know it and get a babysitter. When the child begins to act up, one of them should take him out of the restaurant. But if that level of responsibility was within their grasp they wouldn’t have brought the child to the restaurant in the first place.

And then there’s the restaurant. Why would they risk the future patronage of dozens of customers to avoid hurting the feelings of one very disruptive family? There’s also the risk that a waiter carrying a tray of hot food could trip over a child running through the restaurant, injure the child and himself and dump the tray of food on other patrons. The result would be at least three law suits.

The subject of decorum in a restaurant has been an issue for me for a long time. It’s not just unruly children. Truth is the example related above is the most extreme I’ve ever encountered. In the context of a lifetime of restaurants the number of times I’ve had “kid” problems is all but inconsequential. I can say that now that I’m not sitting in one of those restaurants looking at someone else’s child banging a fork and spoon on the table top while the parents focus busily on their texting and ignore the child’s behavior. It doesn’t seem quite so inconsequential when it is was happening.

In recent years the subject of cell phone use by adults in restaurants has eclipsed the unruly child problem. I shut my phone when I’m in a restaurant, at least I try to remember to do that. But some people, many people, seem to think they are so important they cannot shut the phone. They take calls and leave their dinner partners sitting silently by while they talk in voices loud enough to distract people half way across the restaurant. And then there is the matter of impolite language that infects so many of the restaurant cell phone conversations.

So, whose fault is that? I would suggest the fault lies with the restaurant. The buffoon who feels he must talk on a cell phone in a restaurant either doesn’t care or doesn’t have the sensitivity to know how to act differently. But the restaurant has an obligation to protect its patrons from this intrusion just as surely as it has a responsibility to intervene when the disturbance is an unruly child.

In the discussions I had with others following the Holy Terror evening described above, they voiced a common theme: when a child misbehaves, take him or her out of the restaurant. And all said they did just that on more than one occasion with their own children. They also agreed that younger children could be taken to coffee shops or delis for breakfast or lunch, but not to dinner restaurants until they are older – anywhere from five to seven years old.

Jennifer and I took our sons to restaurants – coffee shops and delis – at very young ages. When they were mature enough to reason, we stressed the need to behave in ways that would not disturb others in the restaurant and warned that they would be removed from the restaurant if they misbehaved. We had to follow through on that threat a few times. But by the time they were five years old they were joining us for dinner at Scandia, the Windsor Room and some of the other top Los Angeles restaurants.

Now, we have three grand children. Two are old enough to understand the subject of restaurant behavior. They are getting the same message. Our son has had to take each of them outside occasionally, but for the most part they are a pleasure to be with.

So, when it comes to kids in restaurants:
1. Parents should set the rules ahead of time;
2. Don’t hesitated to enforce the rules or they will mean nothing;
3. Make the child the center of attention from the moment you are seated until the meal is completed and you are leaving. Young children shouldn’t be asked to amuse themselves endlessly. If the parents want to have a conversation it can happen at home later.

And when it comes to restaurant owners and staff:
1. It is your duty to protect your customers from the intrusion of unruly children. You must not leave it to upset patrons to address the parents of the offending children.
2. You should post a “no cell phones” sign at the door, perhaps provide a cell phone area in the lobby and enforce the rules no matter who is the offender.
3. Even in a tough economy, you cannot tolerate behavior by one customer that threatens to drive other customers away.