COVERUP – The Dirty Secret of Our Radioactive Food Chain 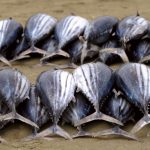 Schools of Pacific albacore tuna will start to reach the northwest shores of the United States late this summer at the end of a long journey that is beginning near the coast of Japan just about now. The migration will continue into late fall and early winter.

As those fish feed on the coast of Japan in preparation for their journey and then make their way across the ocean, they will feast on massive amounts of smaller fish such as sardines, anchovies and squid. They will consume as much as 25% of their own weight each day.

The odds are strong that significant numbers of those Pacific albacore tuna will bring radioactive iodine 131 and/or cesium 137 from Japan’s Fukushima nuclear power plant with them. That the radiation has been spewing into the air and water for weeks while utility and government officials try futilely to stem the flow from the devastated nuclear reactors.

The U.S. Food and Drug Administration (FDA) promises to monitor imports of all food from Japan in the wake of the nuclear disaster. But these fish will not be imported; they will be caught in U.S. waters by U.S. companies and individuals.

A group of fishermen in Washington has asked the FDA to test these migrant tuna in the hope of reassuring the public and averting a consumer panic. But the FDA can’t test every fish and random testing of some fish is no guarantee that the next fish won’t be the one that ingested the iodine or cesium.

Millions of tons of radioactive water have been dumped into the Pacific Ocean in the desperate effort to reign in the Fukushima nuclear plant disaster. While trying to avoid the ultimate disaster – a full core meltdown – workers have doused the reactor units with sea water, which was then returned to the ocean carrying radioactive particulates with it. Still more radiation has entered the ocean as fallout from releases at the plant.

And the worst is yet to come. It’s been 25 years since the nuclear power plant at Chernobyl in Russia melted down. The plant is entombed in concrete. Yet radiation continues to escape at the site. Similarly, radiation from the Fukushima plant will continue to enter the air and water for many decades to come.

This radioactivity, along with that from Chernobyl, atmospheric testing of nuclear weapons, frequent releases at nuclear power plants around the world, and other sources have raised the so-called background level of radiation on Earth. It is against that ever escalating level of background radiation that we are offered assurances that each successive release at Fukushima and elsewhere is no greater than the background level to which we all are exposed in the course of daily life. Plain and simple: it’s a false and arbitrary standard.

Try as they may, utility executives and government officials in the U.S. and Japan can no longer hide the fact that radiation being released at Fukushima will impact the world’s food chain for decades – maybe centuries – to come.

In an earlier article for Table Talk atLarrys.com we asked “Will Your Sushi Glow in the Dark?” While there was a flip tone to the question, the message of that article was serious.

In the weeks since the earthquake and tsunami set things off in the wrong direction at Fukushima, we have been witness to a seemingly endless string of reassurances that there is no threat to public health, no matter how much iodine 131 and cesium 137 has been spewed into the ocean, across the agricultural land of Japan, into the drinking water, and on the vegetation upon which cattle graze.

The announcement was accompanied by assurances that the radioactive material “has a short half life”, would “be diluted by the ocean”, and is not a threat to human health.

Samples of fish showed equally worrisome results. Tests of sand lances caught three miles off shore from the city of Kitalbaraki, about 50 miles south of the Fukushima nuclear plant registered high enough concentrations of both iodine 131 and cesium137 to bring about a suspension of fishing for that specie. Fishing by humans may be suspended, but what about predators that feed on the contaminated fish? And what about other fish swimming in the same contaminated waters?

The whole thing led Japanese government officials to establish standards for radiation concentrations in fish for the first time. Limits on radiation in produce, beef and milk have existed previously. But when those limits were exceeded in tests, government officials issued the standard “no threat to human health” assurance. If that is so, then why have the limits in the first place.

As for the assurances that the radioactive material will be diluted by the vastness of the ocean, that just isn’t true. The material might be disbursed, but it won’t be diluted. Any individual particulate will remain toxic no matter how much water surrounds it. If the fish you are served has ingested some of that material as it feeds on plant life or other fish in the ocean it doesn’t matter how much water surrounds it or how many other fish did not ingest any such material.

All this is standard operating procedure for the nuclear power industry and government regulators. Their play book dictates: deny, reassure, minimize.

The one clearest message coming out of the deceptions, cover ups, distortions and empty assurances of safety in the aftermath of the Fukushima power plant disaster is that it’s time to put the nuclear Genie back in the bottle. The human experiment with the atom as a source of energy has failed. The risks far outweigh any conceivable benefit. There are cheaper and cleaner way to generate energy and nuclear power has absolutely nothing to do with energy independence.

Our food chain already contains levels of radioactivity far beyond what existed just 30 years ago and those levels will continue to rise. We will continue to ingest that radiation and wonder why incidents of cancer are increasing. It’s time to stop adding to the contamination of our food and water.