PHILIPPE vs. COLE’S – A Down Town French Dip Showdown 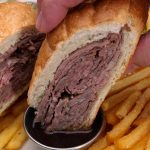 Los Angeles gets a bad rap when it comes to preservation of historical icons. The locals bring it on themselves with their crusades for landmark status for the original golden arches or the oldest remaining Bob’s Big Boy restaurant.

On the other hand there are the Bradbury Building built in 1893, a raft of Frank Lloyd Wright buildings, The Merced Theatre erected in 1870, Mission San Fernando established in 1797, the art deco treasures of down town, and a few hundred other landmark and historical sites.

The city hasn’t been as kind to many of its great restaurants. The Brown Derby, Perino’s, Scandia, Chasen’s, Romanoff’s, Cyrano, La Rue, The Cocoanut Grove – they’re all gone. Many of them had long runs before leaving the scene. And as a friend pointed out recently “how many restaurants in other cities ever make it beyond 20 years; the chef’s and owners get tired.”

So, when we find a restaurant that’s been around for 103 years and still is going strong it’s worth noting. Los Angeles has two such spots – Phillipe and Cole’s.

The rivalry between Phillipe and Cole’s has been intense through the years. Each claims to be the inventor of the French dip sandwich. Phillipe tags the words “The Original” on its signage and promotional material. Cole’s menu proclaims “Originator of the French Dip.” Which is correct most likely never will be settled, although I tend to find the Phillipe claim more credible because of its vagaries.

Cole’s claims to have birthed the French dip soon after it opened in January 1908. Phillipe opened later the same year and claims the French dip was born there in 1918. There are several versions of how the sandwich came to be at Phillipe. It’s this uncertainty that tells my old news reporter instincts to lean toward Phillipe as the originator.

The history of the sandwich is far more clouded at Phillipe. Phillipe Matieu, original owner of Phillipe, was French and his nickname was Frenchy. So, if he really did accidently drop the top of a roll in the meat juice while making a sandwich, the notion of it being called a French dip could make sense. A customer allegedly saw the accident and people started asking to have their bread “put in the sauce like Frenchy does.” Some customers even called the restaurant Frenchy’s for many years.

Phillipe’s grandson says the French dip originated when a fireman asked to have his bread dipped in the juice because it was too dry. Phillipe, himself, told the L.A. Times in 1951 that one slow day in the restaurant in 1918 a customer noticed the meat juice in a pan and asked to have the bread dipped. That’s when other customers started to ask for it to be “put in the juice like Frenchy does,” he said. Yet another version says a policeman named French was the first to ask to have his bread dipped.

By the way, many Angelenos give Phillipe a Spanish pronunciation – Filleepay. But Matieu was French and his name was pronounced Filleep.

Now that we’ve got all that settled let’s talk about the food. I’ve eaten at Philippe fairly frequently for about 47 years but I hadn’t eaten at Cole’s in a long, long time. So, in preparation of this feature I climbed in the car one Friday evening and headed for down town L.A. to see what Cole’s was doing these days.

On the surface the two restaurants appear similar. Both offer beef, lamb, or turkey sandwiches. Cole’s offers pastrami; Phillipe offers pork and ham. Both offer cheese on the sandwiches and have fiery hot mustard on the table. Cole’s will do half a sandwich with a choice of sides. But it’s almost as expensive as a whole sandwich plus a side. Phillipe doesn’t do halvsies. The Cole’s menu lists five available sides. Phillipe’s menu contains 12 sides. In addition Phillipe offers a variety of soups and stews, pickled eggs, pickled pig’s feet, and some of the best pickled beets available anywhere. And Philippe serves breakfast.

Cole’s bills itself as the oldest public house (Pub) in Los Angeles and has a full bar. Phillipe doesn’t have a bar, but offers a choice of 16 beers and 18 wines at reasonable prices.

At Philippe the carvers, who assemble the sandwiches, dip the bread in the pan juices. Most people ask for “double dip” and get both the top and bottom of the rolls soaked in the juice. That makes the bread too mushy for my taste, so I just have it single dipped. Cole’s delivers a bowl of au jus with the sandwich and the customer dips his or her own sandwich.

At Philippe customers line up to order their meals at a counter and carry their own trays to communal tables or a few booths. Customers sit at tables and are served by waiters at Cole’s. Philippe is well lighted; Cole’s is darker. The entire Cole’s restaurant would fit into one corner of Philippe. Parking is free at Philippe. There is no free parking at Cole’s during the day and it’s very limited after dark.

Of the two Philippe is far busier. It’s a stopping place for hundreds of fans on their way to Dodger Stadium from spring to fall. It’s in handy walking distance from the government office buildings in Civic Center. It’s close by Union Station and around the corner from the historic Olvera Street. Cole’s is on 6th Street in a neighborhood that is dark and deserted once the sun goes down.

When I was at Cole’s that Friday night while researching this article, the bar was packed and noisy; the restaurant was about 60 percent occupied. I ordered something called The Big Dipper with lamb. Big Dippers are supposed to have more meat than the regular size sandwiches. After opening the sandwich to squirt on some hot mustard, I asked the waiter, “Is this the Big Dipper.”

After downing my lamb sandwich at Cole’s I had just one thought in mind: I need to stop at Philippe on the way home. So I did.

In the long running rivalry between Philippe and Cole’s, it’s a mismatch. It doesn’t matter who got there first, just who’s serving up the best French dip sandwich today. And the winner by a knock out is Philippe.