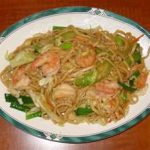 By Larry Levine –
Before I was released from the hospital after my quadruple coronary bypass surgery in 2008 I was told, among other things, to stay out of Chinese recipes because of the high sodium content of the food. Chinese food had been a favorite of mine since  our family spent many Sunday nights at the Chinese restaurant near the elevated train station a short walk from our apartment in Brooklyn NY. Two or three times a month we would have roast pork ends, egg flower soup and chicken chow mein. Later in life my tastes in Chinese cuisine broadened. Through the years I cooked several Chinese meals at home – mostly roast pork or chicken, or chop suey. I recently tried to recreate the chow mein I ate as a kid in Brooklyn. After a few misadventures I came up with the following recipe which comes pretty close.

Heat the olive oil over a medium low light. Add the onion and toss to coat with the oil. Toss occasionally until onions are softened but not browned.

In the meantime, cook the Soba noodles according to package directions, then drain them and set aside.

When the onions are softened, turn the heat up to medium, add the shrimp and scallops and toss them to coat with oil. After two minutes add the cooked noodles and toss to separate and coat with oil. After two more minutes add the bean sprouts, garlic and sauce. Stir thoroughly and frequently until the shrimp are pink on both sides. Sprinkle uncooked choppled scallions on top of the plated chow mein.