AN INTRODUCTION TO KOREAN DINING 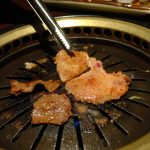 I can make my way through the menus of most ethnic restaurants. Chinese, Japanese, Thai – no problem. French – with a little effort. Spanish or Mexican – fairly easy. Italian – I ordered in Italy in restaurants where no one spoke English.

But when it comes to Korean restaurants, I’m lost. I’ve been eating all those other ethnic foods most of my life but my exposure to Korean has been extremely limited. I had a friend in Sacramento who loved Korean food. Whenever I was in town and we went to lunch, it was to a Korean restaurant. But he always did the ordering.

So, when I got a Facebook message from David Aragon a couple of months ago, it caught my interest. David pointed out the absence of Korean restaurants on our sister web site – http://www.atLarrys.com – where we do recommendations for restaurants throughout California and beyond. David told me about his own passion for Korean food and his familiarity with many of the restaurants in the Koreatown neighborhood of Los Angeles, where he lives. He offered to take me on a tour of some of his favorites.

Life being what life can be, it took something close to four months for us to finally get together. We were joined by atLarrys.com co-host Larry Dietz for the outing

David started the evening by offering up so many choices that I had to stop him. “You’re the tour guide,” I told him. “I know nothing about Korean food; so you pick the places.”

We hit three restaurants that night and by the time it was over I invited David to become a new co-host at atLarrys.com. He’s getting his material together and should debut fairly soon. Turns out his knowledge of food and restaurants goes far beyond Koreatown. But you’ll read about that in his biography when he joins the atLarrys.com team.

First stop on our tour was a place called Honey Pig at 3400 W. 8th St. in L.A. It was a modest walk from David’s apartment on a chilled night. As he rattled off the list of restaurant choices and food choices, I reacted immediately to the notion of pig. That means pork; sign me up.

Each table in this restaurant has a round, domed Korean barbecue grill in the middle. No sooner had we sat down, than a waiter delivered a plate of lettuce leafs, bowls of thick, moist rice paper, and a bowl of julienned green onions in sesame oil. A vinegar dip was set before each of us along with two different spice dips. Then, without us asking, hefty portions of kimchi and bean sprouts were spread around the outer rim of the grill. As the stuff heated we made wraps using the rice paper or the lettuce.

David tried to get us to participate in the ordering, but I refused. “I know nothing. You know lots,” I told him. “You pick ‘em.”

He ordered sliced pork belly and pork ribs. The waiter spread the pork belly slices on the center of the grill. He returned after several minutes and turned them over to crisp on the second side. I’m not a great fan of pork belly. I find it’s often tough and always too fatty. This was tasty and chewy but not tough, though it had the normal quotient of fat. The ribs were wonderful.

After the pork belly and ribs were eaten, the waiter returned with a bowl of white rice and shiso, which he spread on the grill to brown. Then it was mixed with the remaining kimchi and sprouts. While the rice was browning, we were served a family style bowl of soup that was delicious. Not a bad introduction to Koreatown dining. The menu at Honey Pig includes an English language translation for every dish. A return visit would not be a problem. Just sit back and let them bring the standard dishes and then decide what item or two to order for the entree.

Next we moved on to Gamja-Gol at 3003 W. Olympic Blvd. Once again, an array of small bowl delights hit the table about the same time as we sat down. Radish, dried baby anchovies, some kind of jellied thing in a wonderful sauce, kimchi, spiced shiso leafs – just enough of each to tease our taste buds while waiting for the main offering.

We went to Gamja-Gol for the pork neck and potato stew and that’s what we had. David called it pork neck but the menu calls it pork spine. Doesn’t matter. This dish is all about the broth and the potatoes. The pork neck itself has been cooked to death to flavor the broth. There’s not much meat on the bones, but what’s there is worth picking at. David used a spoon to scrape the meat into the broth. I picked at the meat with my chop sticks and then drank some of the broth with my spoon. Delicious. I could have drunk more, but I’m on a low sodium diet and restaurant soups are taboo.  David said it’s also an excellent “morning after” cure. There are no English translations on the Gamja-Gol menu. But according to David, you go here for the pork neck and potato stew and the rest of the menu doesn’t matter. A look at what was on every table in the room indicated he’s probably correct. Just order the small, medium or large. They’ll know what you mean. The medium was plenty for the three of us after all we had devoured at our earlier stop.

Our final stop was Myung Dong Kyoja at 3630 Wilshire Blvd., which David touted as a place to go for dumplings. It was getting late so we split an order of Mandu – steamed pork dumplings very similar to the shui mai you get in Chinese restaurants. There were a dozen of the wonderful morsels in the bowl – flavorful ground pork steamed in the thinnest of wrappers. As full as we were by then, this dish still wowed us. I don’t know if I’ve ever had better pork dumplings. We contemplated trying an order of some other kind of dumplings but decided enough was enough.

There you have it – my baptismal venture into serious Korean food. These were all work-a-day neighborhood restaurants in shopping malls. Among the temptations David dangled in front of us that we didn’t get around to were fried chicken gizzards at one restaurant and pork tongue at another. Five restaurants in one night would have been a bit much, especially since you can’t go into these places to just sample one or two things. As David said, “They seem to feel they have an obligation to fill you up.”

I still don’t feel ready to venture into Korean restaurants with the same aplomb with which I approach other ethnic spots. But at least I know where to start. Next time the fried gizzards and pork tongue start the evening. And sometime I’d like to try one of the more upscale places.