TIME TRAVELING IN LOS ANGELES – He took us 150 years in four blocks in San Francisco; Now it’s 90 years in just seconds in L.A. 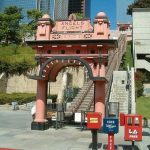 You board in Bunker Hill’s redeveloped world of water features, sushi, Starbucks and Casa, the ultra modern Mexican restaurant at the other end of the California Plaza at 350 N. Grand Ave. Behind you is the L.A. Museum of Contemporary Art. Skyscrapers loom.

After a few seconds descent on the historic funicular, you enter another dimension. Before you can tweet your astonishment you are back in time. You’ve defied the laws of physics. You are at the Grand Central Market, L.A.’s oldest and largest outdoor market at 317 S. Broadway.

This is what nouveau (or Nuevo) was in 1917 – back when the semi-open-air market first became a centerpiece of L.A. culture. It is, in essence, the original California Plaza, what its promoters call “a living monument to the past, the present and the future.”

Picture a park filled with taco trucks before they invented trucks. A haphazard collection of stands and stalls, shoppers and vendors.

There is nothing chic here. Nothing that passes a white glove test.  Sawdust on the floor. A multicultural confusion of counters, customers and cooking aromas. Neon signs from a past era. And food prepared as it has been for generations.

Before we’re done, we’ll time travel back up Bunker Hill and visit Casa, the decidedly contemporary Mexican restaurant a few minutes by time machine but a century removed from the Central Market vendors.

But first, a treat for the traditionalists.

Weave through the Grand Central Market’s aisles of vendors offering meats and produce, roast chicken and Chinese food, cakes and ice cream and about any dish you could call Latin, Hispanic or Mexican.

We’re going to Sarita’s Pupuseria, home of the essence of corn-based cuisine. Pupusas are a traditional Salvadoran dish dating back centuries. They are thick, hand-made corn tortillas stuffed with cheese or other fillings. The pupusa revuelta is filled with a cheese, bean and pork paste. It is hard to imagine a more authentic or tastier version than Sarita’s. You watch the cook as she expertly pats out two corn masa patties, sandwiches in the filling, re-shapes it into a single pupusa and grills it. Served steaming hot, with a vinegary slaw called curtido, it’s eaten like a taco with the bubbly, cheesy filling on the inside. One bite tells you why this dish has lasted through the ages.

Sarita’s homage to Latin food of the past matches Casa’s wink at the modern influences of Mexican cuisine. To appreciate the comparison, hop back on the Angels Flight time machine. Back up the hill and a walk across the plaza. Pass the water feature and you arrive at the “progressive architecture of a modern hacienda setting” called Casa. Taqueria by day. “Nueva Mexicana” restaurant in the evening.

This is everything the Grand Central Market is not. Bar scene. Waitresses in black tights. Big screen TVs. Pop rock on the sound system. White module seating areas inside and out. And a menu that includes fire-roasted “turduckenizo” meatballs made with chorizo spices, turkey, duck and chicken. There’s also some very tasty tacos al pastor of spit-roasted crackling pork, applewood bacon and caramelized pineapple in housemade tortillas, and cascabelle braised short ribs. The thick corn tortilla chips are outstanding as is the extra-spicy habanero salsa.

It may take more than one trip to appreciate the Casa-Sarita’s comparison. Pupusas for lunch and Casa for dinner might be a little daunting. But there is no doubting the impact of the ride on the Angels Flight time machine. The little railway ties together L.A.’s past and present so seamlessly you could almost miss it. But for anyone taken by the culture and cuisine of the city it is truly a trip worth the while.