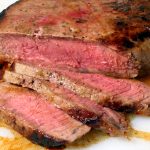 When Jennifer and I both were working and our two sons were in school, dinners in a rush were a way of life. If one of the boys got home before us we would ask that they turn the meat in the marinade when they got home and take it out of the refrigerator about an hour before we were due to get home. This is a very inexpensive cut of meat. It has so little marbled fat that it will get very dry and tough if over-cooked.

LONDON BROIL
¾ lb London broil
4 Tblsp low sodium soy sauce
¼ cup orange juice
2 cloves crushed and chopped garlic
¼ tsp ground ginger
In the morning put the London broil in an 8 or 9 inch glass or ceramic baking dish. Mix all the other ingredients together and pour the mixture over the meat. Turn the meat to coat both sides with the marinade. Put the meat into the refrigerator and go about your day.

When you get home take the meat out of the refrigerator for about 30 minutes, setting it on a wire rack in a roasting pan. Turn the broiler on to full heat.

If the meat is 1 ½ inches thick or less cook about 4 inches under the broiler heat until the top is browned – about 7 to 10 minutes. Turn meat over and broil until browned on the other side – about an additional 7 to 10 minutes.

If the meat is 1 ½ to 2 inches thick increase the cooking time to 10 to 14 minutes per side and cook about 6 inches below the heat.
A London broil must be served rare – 120 degrees on an instant-read meat thermometer. Cooked any longer and it will get tough.
To serve, slice thin, slanting slices across the grain of the meat.

Serves well with mashed potatoes and a green vegetable.