WHAT ARE YOU DOING NEW YEARS EVE? 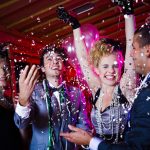 What are you doing New Years, New Years Eve?

That’s the refrain from an old song. It’s also a question you should start to think about now if you haven’t already done so. Even in this down economy, New Years Eve tends to loosen up people and their pocket books. The result is crowded resorts and restaurants and reservations that get more and more difficult as the day nears. So, here are some things to consider and some hopefully helpful hints.

Do you want to get away to someplace quiet and secluded? Or is your taste more toward big city hot spots and crowds? Want to stay near home, or get away for a few days? Cold weather OK? Or are you looking for sunshine?

SAN FRANCISCO – Get a room at the historic St. Francis Hotel at Union Square and get a dinner reservation at Michael Mina, a Michelin star restaurant right in the hotel. Before dinner walk across the street for a sunset drink at the Starlight Room at the top of the Sir Francis Drake Hotel. Even on rainy nights, the views are terrific.

CENTRAL CALIFORNIA – See if you can still get in to Chateau du Sureau in Oakhurst, the gateway to Yosemite National Park. Then get a dinner reservation at Erna’s Eldeberry House. It’s probably the most magnificent secret in all of California. If you’re feeling lucky you might try to get a reservation at the Ahwahnee Hotel in Yosemite Valley for another night, but that’s highly unlikely.

CENTRAL COAST – Check out some of the hotels on Moonstone Drive in CAMBRIA. It’s right across the street from the ocean. For dinner head for The Sea Chest Oyster Bar & Seafood Restaurant. No credit cards and no reservations. Just outside of SANTA BARBARA is the swank San Ysidro Inn with The Stonehouse restaurant. Want something more secluded? Try the tiny town of Ballard. Get a room at the Ballard Inn and book yourself for dinner at The Restaurant at The Ballard Inn.

SANTA MONICA – This coastal city has become a restaurant Mecca. For a hotel with atmosphere and views try either Casa del Mar or Shutters. You can opt for dinner at Catch at the former or One Pico at the latter and be assured of an excellent meal. Nearby, Chinois on Main is an extraordinary choice. A few blocks up the street is The Lobster. Or you can go inland a little way to the Michelin starred Melisse, one of my two favorite restaurants anywhere in California.

SAN DIEGO – Check into the historic U.S. Grant Hotel, get a dinner reservation at de’Medici Cucina Italiana and be prepared for a New Years Eve street scene in the Gaslamp District.

SAN DIEGO COUNTY – In North County up the coast from the City of San Diego you have two outstanding choices. There’s Park Hyatt Aviara Resort (formerly Four Seasons) with its Aviara restaurant and an Arnold Palmer designed golf Course. Or there’s the Inn at Torrey Pines with A.R. Valentien restaurant and to golf courses, including one that was the site of the 2008 U.S. Open.

PALM SPRINGS – Le Vallauris is a romantic gem of a restaurant right in the heart of Palm Springs. Europa Restaurant is a warm and cozy restaurant in the old Villa Royale Inn on the edge of town. It’s far from what anyone would call a luxury hotel, but it still has the feel and charm that made it a choice of the Hollywood set half a century ago.

If you want to hit the road, or put up with the rigors of flying, here are some suggestions outside of California.

MANHATTAN – We’ve spent many recent New Years Eves in New York. It’s a very special place with a very special feeling. We like to stay at the Park Lane Hotel. It’s at the south edge of Central Park. We get a Park View room on the 39th or 40th floor. We can look down on the skating rink and hear the clip-clop of the horses pulling hansom cabs. There are hundreds of great places to go for dinner. My favorite is the River Café at the base of the Brooklyn Bridge on the Brooklyn side of the East River. Not only is the food top notch, the view is out of a dream. Across the river the Manhattan sky line appears close enough to touch and watching over everything from the left is the Statue of Liberty. Get back to the hotel in time for the midnight fireworks show in the park, which you can watch from your window while sipping some bubbly.

NEW ORLEANS – There are great restaurants all over this city including many that boast chefs whose names fill cookbook shelves and crowd the television food shows. But for New Years Eve I would want to stick to the French Quarter and the Bourbon Street area. That’s where the partying happens. My favorite for atmosphere and great food is Acme Oyster House on Iberville Street, a few doors off Bourbon Street. Sit at the counter if you can. If you’re looking for something more staid and upscale, there’s Antoine’s three blocks away on St. Louis Street. There are a number of good hotels on Canal Street, within walking distance of the restaurants and bars in the Quarter.

HAWAII – Want a mellow New Years Eve? Pick an island, any island and get there a few days early. The Ritz Carlton Kapalua on Maui is an excellent choice. It’s at the top of the scale, has inspiring Pacific views, three great golf courses and the Banyon Tree restaurant. It also is just a short drive to Wailea, Lahaina, or Kaanapali. Sit on the patio for a late breakfast the next morning while warm ocean breezes bring a sway to the palm trees.

LAS VEGAS – Here’s where you go for the anti-mellow. Any hotel will do; the action will be furious at all of them. Be prepared for more second-hand tobacco smoke than you’ve inhaled all year. Great restaurants are all over town. But if you want a different Vegas experience for dinner try Rao’s at Caesar’s Palace. It’s a replica of Rao’s in New York. It’s old school Italian food with meat balls beyond compare. And Ceasar’s is a pretty good place to ring in the new year.