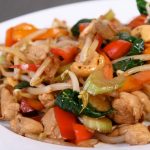 Jennifer was in Sacramento for the birth of our grand daughter Alise when I came up with this recipe.

It was a very busy, pre-election time in my office – one of the few times of the year when food fades to the recesses of my mind. I didn’t feel like lingering over a meal, didn’t want to sit alone in a restaurant, didn’t feel like cooking some kind of elaborate dinner for one, and didn’t want a whole lot of clean up after.

Instead, I rushed through the market on the way home and picked up the red bell pepper, mushrooms and chicken I needed for a stir fry. The rest of the stuff was already in my pantry and/or refrigerator. Because I was eating alone, I used half the quantities of the following ingredients. I skipped the rice because I just didn’t feel like it and it turned out to be plenty of food.

This can be served as is or over one-half cup of steamed brown rice.

You may want to substitute shrimp for the chicken, or mix shrimp and chicken together. Also, you can add some bean sprouts if you have the inclination.