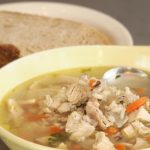 It’s jokingly called Jewish penicillin, but it’s no joke. The name is well-deserved because it helps cure not just the common cold but also all manner of other maladies, including flu and chest congestion. It’s chicken soup. There are generations of anecdotal evidence that it works and now comes actual proof.

With summer ended and the calendar turning to the cooler fall and winter months, we thought it would be a good time to delve into the matter of chicken soup and health.

As I was growing up, my mother’s freezer was never without frozen portions of chicken soup. We would drink it hot from a cup like some kind of elixir any time we complained of a sore throat or had a runny nose. During the winter months she would make a fresh pot of chicken soup just about every week, with carrots, onions, celery, matzo balls and sometimes even with kreplach (meat filled dumplings).

I learned to make chicken soup at mom’s elbow and that knowledge saw Jennifer, our two sons – Lloyd and John – and me through many winters.

Generations of Jewish families have believed chicken soup has medical benefits as strongly as if it said so in the Torah. And just as bagels broke the bounds of Jewish culture to become American food, so too has chicken soup become a cultural icon.

Now there is evidence that it isn’t a myth; there actually is a basis to the medicinal value of chicken soup.

The Summer/Fall 2010 San Diego edition of the magazine DiningOut reports: Dr. Stephen Rennard of the Nebraska Medical Center “applied the scientific method to the ageless theory that chicken soup helps cure a cold. Rennard’s testing revealed that the soup indeed inhibited the white blood cell that causes inflammation’s ability to do so {i.e. it is good for colds}.”

Dr. Rennard reported: chicken soup has anti-inflammatory properties that could explain why it soothes sore throats and eases the misery of colds and flu. In a report published in the journal Chest, Dr. Rennard and his team wrote, “Chicken soup may contain a number of substances with beneficial medicinal activity.”

Dr. Rennard’s’ specialty is pulmonary medicine. His lab ran tests on a batch of chicken soup made by his wife. He pointed out he ran lab tests on the components of the soup and did not test it clinically on colds. The test found all the ingredients in chicken soup were “inhibitory, including the boiled extract of chicken alone.”

My mother, both of my grandmothers, all of my aunts and millions of others would have the same reaction: so what’s new?

Dr. Rennard’s findings on canned chicken soup were far less definitive – some a little bit helpful, some not so much, some not at all.

In the Recipes section of this magazine you can find a recipe for chicken soup – the ultimate comfort food – that has evolved through the generations of our family. There’s also a matzo ball recipe that can be made with or without schmaltz (chicken fat).