ARE THE GREAT CHEFS TRYING TO KILL US? 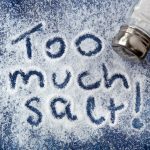 Three dishes sent back to the kitchen at restaurants I’ve long enjoyed … all in the last month and all for the same reason – too much salt.

First it was grilled loup de mer with asparagus and sautéed baby spinach at a restaurant in downtown Los Angeles. One bite and I moved the spinach to the side of the plate. Then I realized the kitchen had sprinkled salt as a finisher on top of the fish also.

Next came a dessert ordered by a friend – a slice of chocolate cake filled with chocolate mousse. I couldn’t believe it – little white flecks of salt shimmering against the brown chocolate.

Then there was the pasta with shrimp special in a garlic and oil sauce on the specials menu at a restaurant we visit several times each month. Jennifer ordered it. One bite and back it went.

Salt has become a fad of epidemic proportions at restaurants. I swear some restaurants must have someone stationed at the door for the single purpose of tossing salt on everything as it leaves the kitchen. I’ve heard chefs on TV cooking shows and read recipes in magazines that talk about adding salt to the finished dish for texture. Incredible. A leading cause of hypertension – for texture.

It all leads me to wonder: are the great chefs of the world trying to kill us.

A recent Newsday article by Erica Marcus started with: “People often ask me, ‘why does the food in restaurants taste better than what I cook at home.’ I have a simple answer: salt.”

Finally, there was a recent episode of the cooking show “Chopped” on which one of the judges railed at one of the chefs: You must apply salt to the protein. I cannot vote for any chef who holds back on the salt on the protein.

I have two issues with this sodium mania – it isn’t healthy and it doesn’t taste good.  Salt has become a crutch on which lazy chefs lean as a substitute for creative use of herbs and spices and quality ingredients.  If you’re going to disguise it with salt, does it matter whether or not you by top quality fish or meat?

I cook at home. I cook a lot. I cook all sorts of different ethnic foods. I’m a very good cook and I do it with little or no salt. I had quadruple coronary bypass surgery in July 2008. My cardiologist told me I would need to adhere to a low sodium diet forever after. So, I set out to learn everything I could about sodium and how to reduce my use of it in cooking. It’s not that I used large amounts of salt before the surgery, but I was under doctor’s orders and I committed myself to learning how to follow those orders without sacrificing flavor.

The answer lies mostly in the spice rack I had custom built into the pantry when we had our kitchen remodeled in 2009. It’s 80 inches of stair-stepped space to hold my herbs and spices. The rack is overflowing onto the shelf above it. The result is that I’m a better cook now than I was before the surgery. My homemade stocks contain no salt; my sauces are cooked with no salt; I buy cans of black beans and tomatoes with no salt added; I cook dried beans without salt. When a dish is close to finished, I’ll taste it and if it needs salt I’ll add just the slightest bit. If I can do it at home there is no reason a well-trained professional chef can’t do it in his or her restaurant kitchen.

Here are some facts restaurant chefs should consider:

Respected health organizations are campaigning to get Americans to consume less salt, to require restaurants and food packagers to disclose the sodium content in their food, and to require reductions in the amount of sodium going into commercial food. The response from the sodium industry has been to pay lobbyists to fight legislation that would require disclosure; they now market products as “reduced sodium” that are reduced only in comparison with the high sodium products that have been on the shelves for decades, and they have produced “studies” designed to undercut warnings of the risks of over-consumption of sodium.

It’s not just those who have had heart attacks, heart surgery, bypass surgery or hypertension who are impacted by what’s going on in restaurant kitchens and food packaging plants. Excessive sodium can create hypertension and water retention.

The Mayo Clinic says: The body needs sodium to function properly. It helps maintain the proper balance of fluids in the body and transmit nerve impulses and it influences the contraction and relaxation of muscles. The kidneys naturally balance the amount of sodium in a body for optimal health. If for some reason, a person’s kidneys cannot eliminate enough sodium, the sodium starts to accumulate in the blood. Because sodium attracts and holds water, the blood volume increases. Increased blood volume makes the heart work harder to move more blood through the vessels, which increases pressure in the arteries. Such diseases as congestive heart failure, cirrhosis and chronic kidney disease can make it hard for the kidneys to keep sodium levels balanced.

There are a few of things you can do to protect yourself:

I love restaurants and food and I appreciate the talent of trained chefs. But tossing salt on a dish as it moves through the kitchen and on to the dining table doesn’t take talent. Leave that for the pretenders.

(LET US KNOW your thoughts about salt in restaurants or when cooking at home. Have you complained at a restaurant? What was the response? How have you cut back on salt when cooking? Please go to the comments area below. – Thanks)