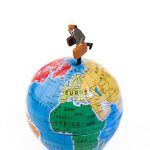 It’s about food; it’s about restaurants; it’s about diverse cultures; it’s about the people who cook food, grow food, raise food, appreciate food, earn their livings from food and in other ways make food a vital part of their nights and days.

But mostly it’s about R.W. Apple, Jr. – Johnny Apple – who gained fame as one of the nation’s premier political reporters for the New York Times and later became one of the world’s most respected food writers.

I first met Johnny when he visited California to report on an election campaign in which I was involved as “the press guy”. We ran into each other several times in the early 1970s, when he wrote about other campaigns in which I was working in California and New York.

But this book is not about Johnny’s life as a political writer. It’s a collection of his food writings.

With a virtually unlimited expense account, he traversed the globe, visiting restaurants, getting to know the owners and chefs, learning about food preparations and exotic dishes and ingredients.

FAR FLUNG AND WELL FED takes us on a gastronomical journey from soft-shell crab houses in Maryland and Hoagies in Philadelphia to corned beef in Dublin, Brazil and New York. We meet mussel farmers in Maine and ham curing experts in Kentucky. Through Johnny Apple’s eyes and typewriter we learn the secrets of distilling bourbon and scotch; we explore culinary wonders in South America, the United Kingdom and Ireland, France and Italy. Johnny introduces us to the history of rye and paprika. And we eat our way through Scandinavia, Asia and Australia.

There are a few recipes in the book, but that’s not what it’s all about. I’ve taken inspiration from many of the anecdotes related in his writing. His reference to a Portobello mushroom topped with roux and sea food is a combination of which I would never have thought and one I doubted when I first read it. But it led me to create my own version of just such a dish. His telling of eating crab cakes at a restaurant in Baltimore and that the restaurant will ship hand-made unfrozen crab cakes on order led me to phone in an order. I learned more about picking and eating soft shell crab from one chapter in this book than I had in an entire lifetime previously.

FAR FLUNG AND WELL FED is an enriching experience. It was given to me as a Fathers’ Day gift by my son Lloyd and daughter-in-law Edie. They didn’t know at the time that I had known Johnny many years ago. The copy they gave me is autographed by Johnny’s widow Betsey, who helped sort through Johnny’s many food articles to select those to be reprinted in this book.

The life Johnny Apple lived is not likely to be duplicated. Newspapers today are either hanging on by a thread or going out of business. That any paper would finance the kind of life Johnny lived is highly unlikely. There’s also the matter of finding a talented writer with an unlimited love of food and the people who make food happen. Come to think of it – I volunteer.

(LET US KNOW of your memories of Johnny Apple and his writing. If you read this book tell us what you like best about it by going to the comments area below. – Thanks)