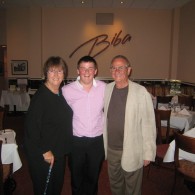 Ryan Prosser pictured above, with his aunt Jennifer Levine and uncle Larry Levine at Biba in Sacramento.

Whichever, it describes the visit of our 16-year-old British nephew Ryan Prosser, who spent most of August with Jennifer and me. We showed him California from the Bay Area and Sacramento to San Diego, always with an eye toward the next meal. In September Ryan will begin attending catering school back home in England. His goal for now is to become a personal chef.

I first met Ryan in the summer of 2009, when Jennifer and I visited England after several weeks in Scotland and Ireland. In short order I discovered Ryan’s twin passions – food and cars. It was the former that formed the instant bond between us. So, when it was decided several months ago that Ryan would visit us this summer, we set about making two lists – the sights we would want him to see and the restaurants we would want him to sample. Here are his comments and recollections about some of the restaurants we visited:

The Lobster in Santa Monica – This is where Ryan ate his first Maine lobster and, after some hesitation, allowed the waitress to dress him in his first lobster bib. “Fun” is the first word he attaches to this evening, “and the fragrances of the food, the kind service of the waitress and the energy in the room.” Ryan fell in love with Santa Monica that evening.

Melisse, also in Santa Monica – “We were greeted so warmly and I felt welcomed. The  presentation of the food was like art, the service was tip top and the aromas were fantastic.”

Erna’s Elderberry in Oakhurst – Jennifer and Ryan dined at this gateway to Yosemite twice. “The room was magnificent, gorgeous. My immediate response on walking in was this is going to be a great restaurant. The food was the finest, the music soothing and the service brilliant.”

Panzanella in Sherman Oaks – This is where we dined the night Ryan arrived and on two later occasions. “We were warmly welcome; the food was fantastic and I learned some Italian.” The burrata Caprese antipasti captured him.

Mo’s in Toluca Lake – “The best burger I’ve ever tasted, cooked to perfection.”

Johnny Rockets at the Peterson Auto Museum – “Oh, those vanilla malts, a drink from heaven.”

Greystone in St. Helena – An unplanned lunch stop at the Culinary Institute of America en route from Sacramento to San Francisco. “I loved watching the future chefs as they cooked the food. It made me think of what’s ahead for me. And then there was that fantastic crème brulee.”

Beach Café at Paradise Cove – “I loved being on the sand, listening to the waves without talking, taking my shoes off to run my feet through the sand while eating a wonderful breakfast, including real fresh squeezed orange juice.”

Brent’s Deli in Northridge – “My first deli and the first time I tried hot beef tongue. It was phenomenal. It made it nice that Larry’s office staff was there with us.”

Biba in Sacramento – “The room was really nice and the food was very good. It was a nice feeling with family – Lloyd, Edie, Larry and Jen.”

The Ivy in Los Angeles – “Everyone was wearing sun glasses so I kept mine on. It’s a proper L.A. feeling, food great, fantastic atmosphere. You couldn’t get more of an L.A. feeling.”

Musso & Frank Grill in Hollywood – “Sitting next to Charlie Chaplin’s table was a great start. We met the owner and he gave me a personalized copy of the day’s menu that said ‘Welcome to Hollywood, Ryan’. I liked the photos of famous people on the wall.”

Scott’s on the River in Sacramento – “Fantastic view of the Sacramento River, food was wonderful; the first evening with my cousin Lloyd and I got to chat with him for a long time.”

de’ Medici Cucina Italiana in San Diego – “This felt like a classic Italian restaurant with classic Italian food. I felt like I was in Italy. I liked watching the waiter make the Caesar salad at the table. I ate saltimbocca for the first time and I can’t describe how good it was.”

Following is a list of most of the restaurants Ryan visited in alphabetical order. Most were for dinners, a few for lunch or breakfast. A few were left off for various reasons. Restaurants with an asterisk (*) are recommended on the web site atLarrys.com. You can read more about those restaurants at http://www.atLarrys.com