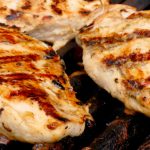 I’ve taken a lot of ribbing (pun intended) since I disclosed a couple of weeks ago that I don’t have a barbecue at home and I don’t like to barbecue because I never have and never intend to deal with cleaning up the ashes of the burnt coals or wood.

It’s not that I don’t like the taste of barbecue or grilled chicken or meat. In earlier days I would prepare a full on Santa Maria Barbecue for family and friends on holidays at the home of my late sister and brother-in-law. I don’t mind the cooking part, it’s the cleaning part that stops me. But it always was my brother-in-law who cleaned the grill and disposed of the ashes.

After we had our kitchen transplant done last year, I decided no fully equipped kitchen could be without a cast iron, stove-top grill. Until yesterday – July 4, 2010 – I had used it only a few times to grill bread. But as I wrote frequently of barbecue for Table Talk at Larrys.com in the last several weeks, I became possessed of grander ideas.

So, yesterday marked two important events in my life – the second anniversary of my quadruple bypass surgery and the first time I ever grilled at home. Here’s how it went:

I made a rub using smoked paprika, chili powder, onion powder, black pepper and granulated garlic. I removed the skin and trimmed the fat from four chicken thighs. I coated the chicken with extra virgin olive oil and then applied the rub to both sides. I put the chicken in the refrigerator for a few hours.

At the Hollywood Farmers’ Market I bought a large momotaro (Japanese) tomato and some fresh picked white corn on the cob.

I sliced the tomato thickly, removed the seeds and diced the tomato. I chopped up two shallots and added them to the tomato along with a fair amount of chopped fresh cilantro. I sprinkled in some chili powder, Worcestershire sauce, Tabasco sauce, crushed dried oregano, white vinegar and a pinch of Fleur de Sel. I covered the salsa and left it on the counter top so the flavors could meld – stirring it every hour or so.

About 30 minutes before I was ready to start grilling, I took the chicken out of the refrigerator. I set my cast iron grill over the center unit on my stove top, coated it lightly with light olive oil and turned the heat on low. When it came time to grill, I increased the heat on the grill, let the grill get nice a hot, and put the chicken thighs on the grill. I turned them every minute at first to keep the ends from curling. Then I went to every two minutes. In about 15 minutes the chicken was done. I used bone in chicken because I think the flavor is better. If you use boneless chicken it will cook quicker.

I served the chicken with the salsa and corn. The chicken was juicy and had a nice smoky flavor from the paprika. I’ve always believed corn is better the less it is cooked. It’s best eaten right off the stalk in the field on a hot day. So, at home all I do is drop the shucked ears in some hot water for about two minutes to keep the flavor as close as possible to the pure taste of the corn. It’s a flavor that can get lost when roasting or grilling the corn. No butter on this corn. We just rolled it in the juices the chicken gave off.

There you have it – the saga of my first at home grilling experience. Cleaning the cast iron grill took a little work. But no burnt charcoal or ashes to deal with. And surprisingly litter spatter. Of course, if you are so inclined, you can do the same preparation for your barbecue or outdoor grill. The secret to the flavor is in the smoked paprika.