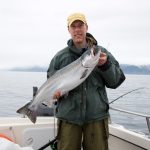 I can’t get fresh springer (coho) salmon in Los Angeles fish markets and I can find it in restaurants only rarely. So, I probably should not complain that it was pink springer instead of white that I had for dinner tonight. It was still very good.

When I saw it on tonight’s specials board – “springer salmon” – and said: “Oh, good, white springer,” the hostess didn’t correct me.

And when I asked the waitress if what I was about to order was white springer, she said, “Yes, it’s springer.” Had I listened more closely I would have heard what happened. But Melanie the waitress was from Holland, visiting Victoria for the summer, and probably didn’t know any better. I tasted one bite, prepared to send it back, but it was heavenly. So, I kept it.

White springer salmon is one of the great culinary treats of all time. I didn’t know it existed until last February. Jennifer and I flew into Seattle for the birthday party of our granddaughter Ella and grandson Milles. As we drove out of the airport, my cell phone rang. It was our son John: “Stop and Gemini (seafood store) on the way to the house. He’s holding two pounds of white springer for me.”

Jim, the fish monger at what has to be the best fish store I know of today, told me the fish he had were caught on special permits issued to 20 people, who were permitted to catch no more than 3 fish each. The catch was assessed with an eye toward determining when to open the short season during which early springers can be taken. That early season white springer cost $32.50 a pound and was worth every cent of it and more. The fat content was magical, the texture firm yet smooth and tender, and the taste extremely gentle and mild. The fish we ate that night was in the water 24 hours before.

Until that day, I thought white king salmon was as good as it could get. Now I know – white king is second best.

Pescatores is a big restaurant around the corner from the iconic Fairmont Empress Hotel, built by the Canadian Pacific Railroad and opened in 1908. Jennifer and I are staying at the Empress during this visit to Victoria. Pescatores serves hundreds of dinners each night, too many to permit individual handling and preparation of each meal. I’m not sure such a place exists in Victoria. 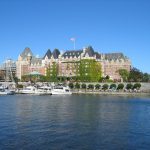 It’s not that we had a bad meal tonight. I got to sample five kinds of oysters I’d never tried before – Effingham, Hope Point, Satori, Little Wing and Komo Gwang, along with Kushis that I have eaten previously. All were sparkling, fresh and worthy of future meetings. The Little Wings were particularly good and will go onto my list of preferred oysters. Pescatores recently opened an oyster bar and small plates restaurant next door to the main restaurant. I walked over and chatted with the oysterman and learned the Little Wings came out of the water near Nanaimo, a little town up island that we will visit Thursday.

My salmon was served on a bed of perfectly sauted spinach with shallots and julienned Granny Smith apples and some kind of potato chips. In deference to my cardiologist, I had them hold the Beurre Blanc. The apples were a perfect balance for the fish and the spinach and the salmon was cooked just the way I like it – still very moist in the center.

Jennifer went for the house specialty crab cakes for a starter, luscious chunks of fresh Dungeness crab wrapped around a dab of brie cheese and pan roasted. Just lightly breaded to hold them together, they were delightful. Then she went on to the sable fish (Alaskan black cod), which probably is her favorite fish. This preparation was marinated in miso sake and served on a bed of greens mixed with strawberries, cucumber, mango and red pepper. Nice idea for a light summer dish but over done. About 25 percent of the salad would have been just fine as a bed for the fish. Unfortunately, Jennifer cannot get the baked black cod that Todd Murakami used to make at his place in West Hollywood out of her palate’s memory. It’s the standard against which she measures all black cod and that’s not fair. She rated tonight’s sable fish as very good, “but not as good as Todd’s.”

Between the regular menu and the special menu at Pescatores tonight, there were 17 starters and 21 main courses on offer. To do justice to the likes of sable fish, springer salmon, or Alaskan halibut, however, probably requires a smaller restaurant where the kitchen can devote more care and attention to each serving. And I can’t explain why east coast lobster and Dover sole were necessary. Fresh, local Dungeness crab was on the menu and that makes sense.

For decades I’ve gotten along by asking bellmen for tips on local restaurants. It worked in New Orleans; it’s worked in New York; it worked throughout Italy. But it isn’t working here. I asked today’s bellman where to go for good local fish. One of the places he named was Barkley’s. I checked the menu – it’s a steakhouse. The other place he mentioned was Nautical Milly’s, with an advisory to “not hold the name against them.” That menu is all over the map – Cajun, Thai, sushi, and a wide enough variety of others to indicate they haven’t figured out who they want to be.

Could be the best bet will to get out of town and find little gems of places in the tiny villages that dot the up island coast.

Chapter Five – July 13, 2010 – A FOOD LOVER’S TREK tracks the travels of Table Talk editor Larry Levine and his wife Jennifer as they make their way by auto, ferry, plane and train from Los Angeles to Fairbanks Alaska and back. A new chapter will be published every day as long as they can connect with the Internet. You can read the earlier chapters by clicking on Food Lover’s Trek above.