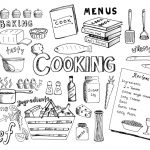 Ponder these: what makes some people out and out foodies while others eat simply for fuel, and why are so many people in the world of political campaigning devoted foodies?

These questions ran through my mind today as we motored north from Salem Oregon to Issaquah Washington, about 20 minutes southeast of Seattle. We managed to get through Oregon with no rain. The skies were bright and sunny all the way, until we crossed the border into Washington. Then the clouds settled in and it remained overcast the rest of the way. What else is there to do on a drive like this but follow your mind wherever it wants to lead. Thus, these two questions to ponder.

For years I have known that an inordinate number of people who have come into my life love food. We talk about food incessantly, swap recipes, share information about restaurants, dine out together, love to cook, hang out at farmers’ markets and read food books. Most of the co-hosts on my restaurant recommendation web site atLarrys.com are involved in politics or government in some way.

I had a considerable amount of interaction with Johnny back in the 1970s, when he covered a number of election campaigns in which I was involved. As for his food writing, I wasn’t even aware of it until my son Lloyd and daughter-in-law Edie gave me this book for father’s day this year. The parallels were beyond striking. Johnny was a political reporter who loved food and wine and restaurants and wrote about them with gusto. I was a political reporter in my early adulthood, then went off into campaign consulting and recently started the atLarrys.com restaurant web site and this Table Talk at Larrys.com online cuisine magazine. I have been cooking since I was 14 years old and eating in fine restaurants since I was 4 years old.

My life is populated by colleagues who love food. Pop on over to the web site – http://www.atLarrys.com – and read the biographies of my co-hosts. They’re mostly pols. And they are just the publically visible examples.

One of the things I love about political consulting is that I know the exact day each project will end on the day it begins – Election Day. After that day, if I don’t like the client, I don’t have to see him or her again. Most often I do like them and we continue to see each other for lunch or dinner for years to come.

Liken that to a new recipe – one gotten from a book or one that springs from my mind. If I try it and don’t like it I don’t have to use it again and I know pretty close to the exact minute when I will know the answer to that question. If I do like it I can use it for years to come. The same is true of a restaurant.

Of course, it can’t be that simple and the answer probably isn’t the same for everyone. My love of food comes from my mother, who loved fine restaurants and fine dining. Yet, my two sisters grew up in the same home and neither of them felt as strongly about food as I do. In fact, one of them was one of those eat for fuel people unless it was Chinese food.

We may never know the answer to the questions posed here. But I’m fairly certain there are some common factors in our psychology that drives us to food, some need that is met by the many manifestations of our love of food. If you have any thoughts to contribute or possible explanations please scroll on down to comments and let me hear from you.

Tomorrow we will be in Sooke on Vancouver Island. We will stay at the Sooke Harbour House and dine at the restaurant there. This trip was originally schedule two years ago but had to be called off because of my quadruple bypass surgery. We will spend the next 10 days on Vancouver Island and in Alaska. It’s Dungeness crab season now. Several different types of salmon are in season. Alaskan halibut are running and that, to my taste, is the only halibut worth eating. There will be Alaskan black cod and if we are lucky there will be red rock fish. I’m looking forward to these with the same anticipation I have for the possibility of seeing bears, moose, elk, foxes and other wild life in Denali National Park.

That’s how devoted I am to food. Who else would have cardiac bypass surgery, be warned by doctors and dieticians to eat a low fat, low cholesterol and low sodium diet and immediately go to work on a book titled But I Still Love to Eat.

Chapter Three – July 11, 2010 – A FOOD LOVER’S TREK tracks the travels of Table Talk editor Larry Levine and his wife Jennifer as they make their way by auto, ferry, plane and train from Los Angeles to Fairbanks Alaska and back. A new chapter will be published every day as long as they can connect with the Internet. You can read the earlier chapters by clicking on Food Lover’s Trek above.