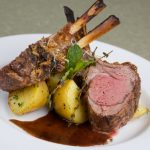 Chapter Two – July 10, 2010 – A FOOD LOVER’S TREK tracks the travels of Table Talk editor Larry Levine and his wife Jennifer as they make their way by auto, ferry, plane and train from Los Angeles to Fairbanks Alaska and back. A new chapter will be published every day as long as they can connect with the Internet.  See earlier chapters by clicking on A Food Lover’s Trek above.

The only lamb we ate at home when I was growing up was shoulder chops, broiled with a little lemon juice. My mother served it with spinach and mashed potatoes and it’s something I enjoy to this day.

When Jennifer came into my life some 43 years ago, she expanded my horizons. She is, after all, British. Though she never cooked lamb at home – she doesn’t enjoy cooking – she would order different lamb dishes in restaurants and I would taste them.

Then, her sister Sylvia and brother-in-law Brian came from England for an extended visit. Sylvia roasted a leg of lamb for us one night with onion sauce and I was a convert. Lamb became my favorite meat. I learned how to cook very good lamb stews, Irish stews, legs of lamb on the bone or butter flied, and lamb shanks.

In those early days I would seek out New Zealand lamb, which had the reputation for being the best and usually was. But things changed and in the last several years I became less and less enamored of New Zealand lamb, finding its texture often mealy and its flavor a pale reflection of what it once was. Eventually, almost any American lamb surpassed the former king. I even found New Zealand lamb lacking in New Zealand, when we visited there a few years ago.

The first time I tasted Colorado lamb was at a restaurant in Sedona Arizona. Before that night, I didn’t even know they raised lamb in Colorado. I swooned with every mouthful. Soon, more and more restaurants offered Colorado lamb and I abandoned New Zealand lamb completely.

Then, along came Oregon lamb, which I tasted after Jennifer ordered a rack of lamb at Alessandro’s in Salem Oregon several years ago. We were on one of our northbound journeys to visit our son John, daughter-in-law Julie and their then only child Ella in Kirkland Washington. We found Alessandro’s by accident, while looking for another restaurant. I ordered veal picatta with tortellini that first night and finished the meal vowing to return. Jennifer’s lamb was so good that on our next visit I turned away from the veal in favor of the lamb.

For the last several days, as I contemplated this current trip I anticipated a rack of lamb at Alessandro’s. While driving through the northern tier of California, over the Siskiyou Mountains and through the farms and fields of central Oregon today, I searched for melodic first sentences with which to begin this rhapsody to the lamb at Alessandro’s.

Unfortunately, it was not to be. Not only have they abandoned Oregon lamb in favor of New Zealand lamb, which the waitress assured us was excellent. She then told us it was purchased at Costco, where she said the chef was buying much of his product these days. I can only assume it’s a nod to the economy and the need to cut costs during a time when business is off. On a Saturday night, the place was essentially empty.

We ordered the lamb anyway, only because we had learned to trust this chef over the years and hoped he would do something special. We were wrong. I should have stuck with the veal picatta. We will scratch Alessandro’s off our list of destinations for the future and look for someplace new to have dinner in this part of Oregon. And I will take Alessandro’s off the recommended list at the restaurant web site atLarrys.com

As for lamb I order in other restaurants or to buy for the house, Colorado lamb still reins supreme. I would put Oregon lamb and Sonoma lamb in a tie for second. Next would be California lamb. There probably are a few others that should be listed, but I haven’t tasted them yet.

Tomorrow it’s on to Issaquah Washington and John, Julie, Ella and Miles. With them on my plate, it won’t matter much where we eat, though I would opt for fish purchased at Gemini Seafood in Issaquah and broiled or grilled at home. It’s the best fish market I know of today.